Funny, 13 unrelated black people all busted in a criminal conspiracy and race isn't even mentioned.

All 13 of the perps are black—was this a "racial grievance" crime? Or do all those schools only hire blacks?

Was it racist for the newspaper to NOT post pictures of all the unrelated perps from different locations because they were all black?

Or were all these people busted because they were all stupid and took checks for stolen goods, and they all just happened to be black?

Or is this just another racist prosecution of innocent black folk?

James Fulford writes: The LA Times version of this story, 13 school workers, librarians indicted in textbook theft ring, By Richard Winton, September 5, 2013, reports the arrest of perps Veronica Clanton-Higgins, et al and was illustrated with a picture of a black lady. Not, however, Ms. Clanton-Higgins, who is black, but Jackie Lacey, the District Attorney of LA County, who is prosecuting the case. 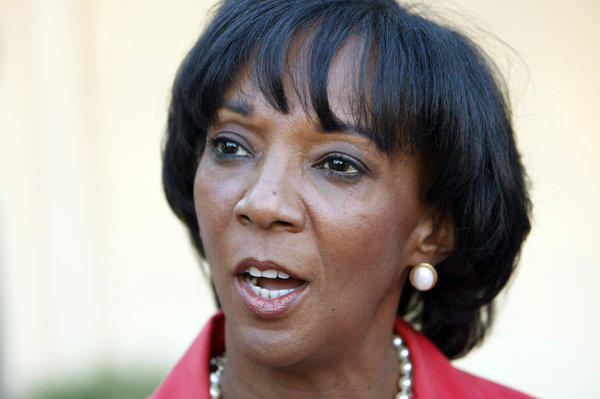 This is a perfect example of the Associated Press Rule, a literal rule, written down in a book, that

This means that "first black" to do something good is relevant. The thousandth black to commit an armed robbery is not.

Thus Ms. Lacey was the subject of a story titled Jackie Lacey takes office as county's first female, black D.A. December 3, 2012. In contrast, this week's LA Times story on the textbook theft ring does not mention race at all.