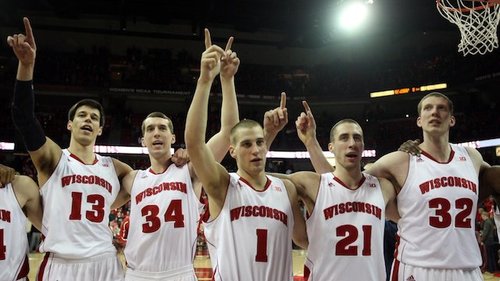 Above, the Wisconsin Badgers, college players expected to graduate with degrees that they can read.

Still no word on the identity of the student who hung a noose on the campus of Duke University, the story that briefly interrupted Main Stream Media coverage that for months prior had been 24/7 Ferguson, Ferguson, and more Ferguson….until it began to look like yet another “Hate Hoax.”

But we do know the identity of the Duke Basketball team which will compete for the NCAA Men’s Basketball National Title Monday night (April 6). And it’s a complete departure from the identity of the teams that the policies of Coach Mike Krzyzewski (“Coach K”) fostered 2003-2010, culminating in Duke’s capturing its 4th National Title in a magical championship victory over Butler on April 5, 2010.

This year’s team is 64 percent black/36 percent white, with only one white player—Marshall Plumlee—seeing playing time). The Duke University basketball program from 2003-2004 to 2009-2010 was overwhelmingly white. [How Black Is Duke Basketball?, by Billy Haisley, Deadspin.com, December 10, 2013] Thus the 2010 National Title team was 75 percent white, with 5 white players routinely representing Duke on the court.

When the teams were out there, nobody watching was thinking, This pro and that pro. Where will they go in the draft? It was just about these kids at Butler and those kids at Duke. The word people kept using with me was pure. It just seemed pure.

Or as Steve Sailer helpfully explained with his usual tact:

Keep in mind that Duke’s strategy is not to recruit one-and-done morons and rapists, but instead to try to find players who can least vaguely fulfill the student-athlete athlete ideal and stick around to graduate. That’s a big reason why they are hated.

And Duke was hated—because of its overwhelmingly whiteness, in a sport now dominated by black players, the phenomenon of “Duke Hate” was spawned. See Duke Basketball: Why Are The Blue Devils So Hated? By Anthony Riccobono, IBtimes.com , April 1, 2015 and In Defense of Duke, by Chris Good, The Atlantic, April 2 2010.

Duke alum Richard Spencer, now the Editor of Radix Journal, noted the racial angle to “Duke Hate” when he wrote:

Duke Haters love to associate the Blue Devils with elitism and class privilege. But what’s so unusual about the team is that its players are precisely those the world assumes can’t compete in big time basketball. Christian Laettners aren’t supposed to be able to even hang with Larry Johnsons.

Larry Johnson is a black male, who played on the highly-touted all-black UNLV squad that Laettner’s Duke team upset in the early 1990s.

"Cause we had a lot of really good white players," Hill told Reese Waters. "The funny thing is, I played with Bobby Hurley and Christian Laettner. They were despised when we were on the road.

But curiously, "if you look in the crowd, and it was nothing but white students at the games," Hill declared. "It was white-on-white hate. I don't understand that."

They wouldn't get on me," Hill recalled at away games. "They got on Christian Laettner. They got on Bobby Hurley."

Grant Hill on why Duke is so hated: 'We had a lot of really good white players', FoxSports.com, Mmarch 20, 2014 Emphasis added.

Christian Laettner, perhaps the most hated white basketball player of all time ( The 20 Most-Hated Duke Players of All Time, By Chris Yuscavage, Complex, March 8, 2013) was the object of a recent ESPN Documentary entitled “Why I Hate Christian Laettner.” It’s utterly inconceivable that a documentary with the same first three words would ever be made if the subject were black.

But Coach K’s 2014-2015 Duke team that will play for the NCAA Title Monday night is overwhelmingly black.

So will this end the era of “Duke Hate”?

And, while we’re on the subject, what of their opponents, the Wisconsin Badgers?

Four of the five starters for the Badgers are white, including Frank Kaminsky, perhaps the best player in all of college basketball, who recently enjoyed the distinction being berated with the curious pejorative of “f**k that n***a” by a defeated member of the almost all-black Kentucky Wildcats.

And just as in Wisconsin’s run to the Final Four last year, it’s been a team of white athletes reminiscent of Coach K’s hated 2003-2010 run at Duke that’s propelled the Badgers to the edge of a championship.

While every other starter for this year’s Final Four were black, Wisconsin fields a squad of student-athletes almost as white as the 2009-2010 Duke National Champions that ushered in so much of “Duke Hate” talk:

Frank Kaminsky, star center for the University of Wisconsin basketball team, sat on a dais with four of his teammates before last year's Elite Eight matchup with Arizona and fielded questions from the news media.

In one or two words, a reporter said, how would you want Arizona's starters to describe you?

"Resilient" and "disciplined," replied two of the players. "Unselfish" and "tough," answered two others.

It's a racial makeup that has been noticed, says Jordan Taylor, an African-American point guard who starred for the Badgers from 2008 to 2012. He plays for Hapoel Holon in the Israeli professional league and says he was needled by a teammate this week about Wisconsin's chances against undefeated Kentucky.

"He was just saying we've got too many white guys," Taylor says with a chuckle. "I still get kind of poked at, teased about it, because it always seems like there are about four white guys and a black point guard all the time (in Wisconsin's starting lineup)."

What has become familiar is the Badgers' success under coach Bo Ryan, whose teams have made the NCAA tournament in each of his 14 seasons, reached the Sweet 16 seven times and are in Final Four for the second year in a row…

Note that USA Today’s Peter reports that, as with Duke, whiteness is in part the unintended consequence of coaching policy:

A number of factors contribute to Wisconsin's predominantly white teams, including: state and university demographics; coaching at the lower levels; and Ryan's system, which features a methodical, half-court offense that is key to his success but according to players and coaches can make it a challenge to recruit top African-American players.

Taylor, who was an all-Big Ten Conference point guard for Wisconsin, says, "I think the style of play we have doesn't appeal to the premier athlete." (Emphases added).

Bottom line: it’s okay to cheer for Duke now, because we have a new team of white guys to hate, right?