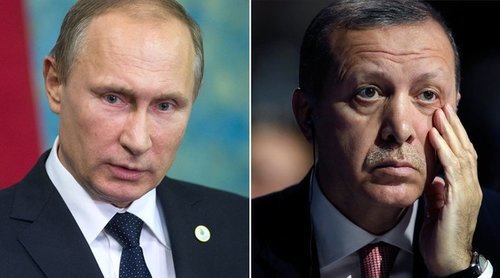 Who Is Our Real Ally Against Terror: Erdogan, Who Helps Islamists, Or Putin, Who Bombs Them?

Monday, MSNBC's "Morning Joe" hosted a spirited discussion with Donald Trump on whether he was right in asserting that Muslims in New Jersey celebrated as the towers came down on 9/11.

About Muslim celebrations in Berlin, however, there appears to be no doubt. In my chapter "Eurabia," in "State of Emergency: The Third World Invasion and Conquest of America," [2006] is this quote from The New York Times Magazine, exactly 10 years ago.

"Parallel to the declarations of 'unconditional solidarity' with Americans by the German majority, rallies of another sort were taking place in Neukolln and Kreuzberg. Bottle rockets were set off from building courtyards, a poor man's fireworks, sporadic, sparse and joyful; two rockets here, three rockets there. Still, altogether, hundreds of rockets were shooting skyward in celebration of the attack, as most Berliners were searching for words to express their horror."[The New Berlin Wall, by Peter Schneider, December 4, 2005]

Neukolln and Kreuzberg are neighborhoods of "gastarbeiters," Muslim Turkish workers who came to Germany in the millions to work in menial jobs beginning around 1960.

While the flap over what Trump saw persists, a more serious question has arisen: Is Turkish strongman President Recep Erdogan trying to draw the United States in on his side in the war in Syria, and into a confrontation with Vladimir Putin's Russia?

A little history is in order. Not until 1952 did Turkey join the North Atlantic Treaty Organization, all but two of whose original 12 members were on the Atlantic or North Sea.

Yet bringing in Turkey was a ten-strike, putting NATO on the Dardanelles and Bosporus and on the southern coast of the Black Sea, right up to the border of Stalin's Soviet Union.

But the world that made Turkey such a strategic asset has vanished. Armenia and Georgia are no longer Soviet republics but free nations. The Soviet Empire, Warsaw Pact, and Soviet Union no longer exist, and Balkan nations as well as the Baltic States are members of the EU and NATO.

Turkey is no longer the secular nation-state of Kemal Ataturk, but increasingly hearkens to the Islamic Awakening. In Syria's civil war, her behavior has not been what one might expect of an ally.

The Turks left the door open for jihadists to join ISIS. They are accused by two Turkish journalists, now facing life in prison, of shipping arms to ISIS. The Turks are charged with permitting ISIS to move oil from the Islamic State into and across Turkey. Russia, which joined the U.S. in bombing the tanker trucks that move the oil, charges Erdogan's son with being involved in the black market trade with the caliphate.

Instead of battling ISIS, Erdogan is fighting Kurds in Turkey and Iraqi Kurdistan and is threatening to attack Syria's Kurds if they cross to the west bank of the Euphrates.

Erdogan has dismal relations with Egypt and Israel and appears hell-bent on bringing down Bashar Assad in Syria. Yet, Assad's army remains the sole force standing between ISIS and Damascus.

Erdogan's Turkey has its own separate national agenda. While understandable, what is of concern is that Erdogan could escalate his clash with Assad's regime into a clash with Putin's Russia, which is backing the Syrian regime—and drag us into his war.

And the longer this war goes on, the greater the likelihood of something like this happening.

For the operative premise of NATO is that an attack against one is an attack against all. What do we do should Erdogan provoke a Russian attack on his aircraft, and then invoke Article V and call on all NATO nations to come to Turkey's defense against Putin's Russia in Assad's Syria?

Turkey's shoot-down of the Russian Sukhoi Su-24 makes this more than a hypothetical question.

While the Russians have indicated they are not going to make this a casus belli, Putin charges that the U.S. was given advance notice of the flight plan of the Russian plane.

Were we? Did we authorize, know about, or suspect Erdogan was planning to shoot that Russian plane down? This is no small matter. And Americans have a right to know.

Then there is the geostrategic question.

The world of 2015 is nothing like Truman's world of 1952 or Reagan's world of 1982. The adversary we confronted then, the Soviet Empire and Soviet Union, has not existed for a quarter century.

Why then does NATO, created to defend Western Europe against that adversary, still exist?

Why are we still committed to fight Russia not only to defend Germany, but Estonia and Erdogan's Turkey, and if the neocons get their way, to be committed in perpetuity to fight Russia for Georgia, South Ossetia, Abkhazia, Moldova, Ukraine, Crimea, Donetsk and Luhansk?

If the history of the 20th century teaches anything, it is that war guarantees all too often lead to war.

But in this war against "radical Islamic terrorism," who is the real ally: Erdogan, who has been aiding and abetting Islamic jihadists in Syria, or Putin, who has been bombing them?