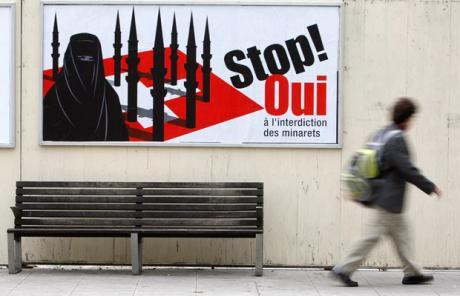 What That Immigration Patriot Victory In Switzerland Means

The Swiss get it! The majority of citizens in this small country recognize that the so-called “right” to migration is devastating this idyllic nation surrounded by the increasingly authoritarian European Union.

Unfortunately, as a February 10 article in the Wall Street Journal makes clear, the European Union will use economic sabotage to strike back against this exercise in democracy.

Switzerland was warned Monday of potentially serious repercussions in its relationship with its biggest trading partner, the European Union, after Swiss voters backed a cap on immigration in a referendum.

The outcome of Sunday's vote potentially undermines close ties with the 28-nation bloc that are crucial to the Alpine nation's economic success and that of its influential financial-services sector.

Switzerland now is highly unlikely to honor a pledge to scrap quotas for migrants coming from the EU's newest member, Croatia, on July 1—a move that would in turn trigger the suspension of other accords by the EU. Treaties governing relations between the two sides contain a guillotine clause that invalidates the entire package if one of component is terminated."

Back home in the United States, our own illegal immigration invasion has always been subsidized by the cheap labor lobby. Similarly, many Swiss business groups were concerned first not about their country’s future, but about their company’s bottom line. The difference: in Switzerland, citizens can overcome the corpocrats.

Does this sound familiar, folks?  A solid 60% of US citizens have been against present levels of alien influx for decades. Nonetheless, the American majority is ignored by both Congress and the White House. The Swiss referendum is how an actual democracy should function.

Swiss citizens have made clear they require their government

…to renegotiate the treaty with the EU that guarantees free movement of workers. About 64,000 EU citizens have settled in Switzerland every year over the past decade, according to the Federal Office for Migration.

It wasn't immediately clear how the Swiss government would implement the new limits—the referendum calls for quotas within the next three years.

But senior EU figures made plain that Switzerland wouldn't be able to dismiss elements of the trade package that it later decides it doesn't like.

"Cherry-picking from its relationship with the EU isn't a durable strategy for dealing with Europe," said German Foreign Minister Frank-Walter Steinmeier.

Michel Barnier, EU commissioner for the single market, said in an interview that the vote is likely to have heavy consequences. "We'll probably need to reconsider our approach with Switzerland in a general way." Mr. Barnier said."

Naturally, since all EU nations are feeling the pinch of alien migration, they are anxious to keep all doors open.

The larger question: whether there a comfortable limit on the alien percentage in any given country. The most extreme example is Dubai, where 82% of the population is foreign-born. Of course, this overwhelming majority exist in a condition barely above slavery, with no upward mobility possible.

As extreme as that sounds, there are already some parallels in the United States. In some cities like New York or Los Angeles, certain areas have close to 50 percent of the population as foreign born.

Such a situation is bound to provoke a reaction, as it has done in Switzerland. Can common sense prevail before simple tribalism takes over?

The issue is now on the table and the would-be rulers of Europe have to contend with a national population that has had enough.

As the WSJ article tells us:

Around one-fifth of Switzerland's population of 8 million is made up of immigrants, two-thirds of whom are highly trained workers, according to the Organization for Economic Cooperation and Development in Paris.

The initiative doesn't specify the level of quotas Switzerland needs to introduce but directs the government to limit residency permits "governed by Swiss economic interests." The initiative also identified people living in EU countries along Switzerland's border but working in the Alpine country as subject to the quotas.

In Basel, my wife and I were made keenly aware of the vast numbers of French who migrate daily to work there. But of course they return across the nearby border after work.

“The granting of residency permits will be based largely on the needs of the employer and the ability of the employee to integrate and earn his or her own living," the initiative read.

In a statement, the Federal Council, Switzerland's cabinet and collective head of state, said it would submit a proposal on implementing the quotas to parliament as soon as possible.

The council acknowledged the initiative was contrary to the principle of free movement of persons and said it would begin discussions with the EU on the next steps.

Anti-immigration parties in the EU welcomed the vote. Nigel Farage, head of the U.K. Independence Party, congratulated the Swiss people for taking "advantage of their position outside the European Union to set their own immigration rules in their own national interest." A U.K. referendum on the issue would have the same outcome, he said, "but by a landslide."

Heinz-Christian Strache, head of the right-wing Austrian Freedom Party, said the Swiss vote was a big success against "mass immigration." He said a majority in Austria would back immigration caps, adding the recent opening of labor markets across the EU to workers from Romania and Bulgaria should be reversed."

For patriots in Europe, the end game is what VDARE.com has supported from the beginning—patriotic immigration reform that limits the total numbers of aliens from outside and inside the EU.

In America, Switzerland, and throughout the West, end the invasion—and put citizens first.