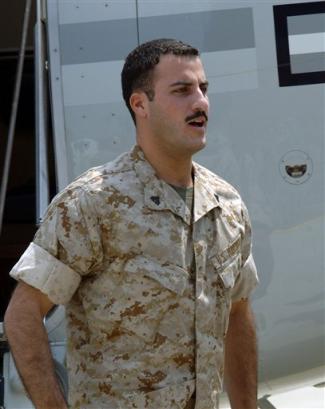 Ten years ago this month, U.S. Marine Wassef Ali Hassoun disappeared from Camp Fallujah in Iraq. After a five-month military investigation, he was charged with desertion and theft, brought back to Virginia's Quantico Marine base and then transferred to North Carolina's Camp Lejeune for trial.

Yet, a full decade later, Hassoun is as free as a bird.

The accused deserter's whereabouts are unknown. No trial ever began. No punishment ensued. And our leaders in Washington don't seem to be doing a thing about this.

Hassoun was born in Lebanon and immigrated with his family to Utah in 1999. A few years later, he joined the Marines as an Arabic translator. On June 20, 2004, Hassoun bailed on guard duty at his base in Fallujah. He took his military-issued gun and his Muslim prayer rug. Military records obtained by the Salt Lake Tribune showed that he was "torn between military loyalty and Muslim beliefs."

According to the internal probe, he undermined intelligence-gathering operations by refusing to translate questions about Islam. He balked at raising his voice to suspected jihadi imams and sheiks. He openly threatened to "walk out the front gate and leave." [Hassoun torn by internal conflict, By Robert Gehrke and Derek P. Jensen, The Salt Lake Tribune, September 2, 2005]

The Muslim Marine told his colleagues he supported Hezbollah terrorist attacks on Israel. Members of his unit told investigators he was "anti-American" and listened to jihad sermons on propaganda CDs. Hassoun had received spiritual counseling from Navy Lt. Cmdr. Abuhena Saifulislam, a Muslim military chaplain tied to a radical Wahhabist outfit under federal investigation, according to Hoover Institution fellow and journalist Paul Sperry.

A bizarre video by Hassoun's Islamist "kidnappers" showed him blindfolded with a sword above his head. But his fellow Marines suspected it was all staged and the "abduction" a collaborative fake. What did the purported hostage-takers want in return for the shady, disgruntled American serviceman? The release of jihadists in "U.S.-led occupation prisons." Translation: Gitmo detainees. (Americans would never negotiate such a reckless trade, right? Oh, wait.)

In an even weirder twist, Hassoun somehow resurfaced at the U.S. embassy in Lebanon a few weeks after he walked away from his base. His family was rumored to have enlisted the aid of an Islamist group associated with the Muslim Brotherhood.

Hassoun denied desertion charges, came back to the U.S. for trial and then deserted a second time after failing to return to Camp Lejeune after visiting family in Utah. In 2011, Hassoun's family sought a $1 million book and movie deal in Hollywood. One of his brothers said the fugitive Marine was with family in Lebanon.[Family of AWOL Marine renews interest in book deal, By Jennifer Dobner, Associated Press February 8, 2011]

Ten summers after he abandoned his post, double-deserting Hassoun is still on the run and has yet to be held accountable.

It's worth reminding Americans about Hassoun's story in light of President Obama's exploding Bowe Bergdahl scandal. By all appearances, this administration has no intention of taking action on longstanding allegations that Bergdahl, like Hassoun before him, deliberately abandoned his post in 2009. Defiant Obama said he makes "no apologies" for the treacherous deal, even as reports of Bergdahl's renunciation of U.S. citizenship and conversion to Islam have surfaced in the past 48 hours.

Soldiers on the ground have described how Bergdahl's disappearance catalyzed deadly coordinated attacks by the Taliban on numerous U.S. outposts in Afghanistan. The response has been breathtaking. One of Obama's minions, former Veterans Affairs bureaucrat and now Housing and Urban Development flack Brandon Friedman defended his boss by suggesting that Bergdahl's colleagues were "psychopaths."

Nancy Pelosi's daughter, Alexandra, sneered that Bergdahl's critics inside the military are "dysfunctional." Harry Reid invoked Hillary Clinton's "What difference does it make?" retort. The president himself sniffed that swelling anger among the families of the fallen was "whipped up."

Islamist sympathizers inside our military walk away, and the Obama White House turns a blind eye. The Fort Hood jihad attack by Nidal Hasan, who invoked Hassoun in PowerPoint presentations to his military supervisors, is "workplace violence." Gitmo recidivist Abu Sufian bin Qumu, lead suspect in the Benghazi attack, roams free despite the president's promise to make "justice" his "biggest priority."

Our commander in chief empties Gitmo of the worst of the worst jihadists and shrugs at the recidivists targeting American soldiers and civilians. And in a desperate attempt to deflect from the rising death toll of the Veterans Affairs book-cooking scandal, Obama gave Bob Bergdahl a Rose Garden stage to invoke Allah in Arabic.

If you're not "whipped up" into Category 5 disgust, you're not paying attention.