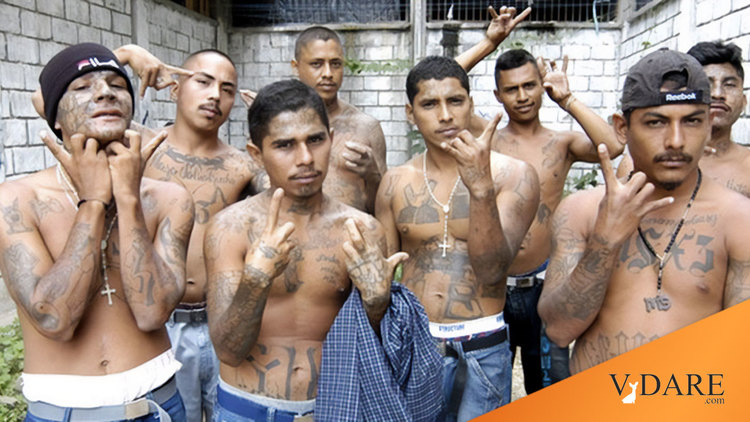 The Shenandoah Valley is justly celebrated in American history as the place where Stonewall Jackson  made his name driving back Northern invaders during the Civil War—in battles like Cross Keys and Port Republic. But now, thanks to federal immigration policy, it has serious Hispanic gang problems, dating from the early 2000s.

About a year ago, a student at James Madison University was leaving the 7-Eleven on South Main Street in Harrisonburg, Va., to return to his apartment. It was 2 a.m., hardly an unusual time for a kid in the college town to walk the streets near campus.

Yet walking about the city that late is just as unsafe as it common. Three members of the Mexican SUR 13 gang attacked him, the city's daily newspaper reported, and beat him unconscious. They took $1 and a cell phone.

After the crime, a friend of the victim texted the cell phone, the newspaper reported, only to receive a scatological, threatening text in return—the printable part said "South Side Sureneos run these 540 streets". [Harrisonburg: gang-member's sentence twice that of sentencing guideline recommendations, January 26, 2010]

540 is the area code for the Shenandoah Valley. Sureneos, (properly spelled Sureños) stands for SUR 13, one of the murderous gangs federal immigration authorities have permitted to spread nationwide because they are too terrified of organized Hispanics to close the borders.

Two of the feral culprits were convicted and landed in prison. But their cyberphonic claim isn't far from the truth. Harrisonburg is turning into a scaled-down rural version of Los Angeles. Menacing young Hispanics run the streets and join gangs; racial gang fights with blacks are increasing. The cops can't lock them up fast enough.

Harrisonburg had its first gang-related murder back in 2008. A young man connected to another unit of the Bloods was shot to death at a party near JMU's campus. A criminal connected to that crime was involved in a gang attack in the county jail, the newspaper reported. He copped a plea and was released.

Across the Valley generally, the murder of Brenda Paz in 2003 was law enforcement's first wake-up call. Paz was the MS-13 member found slashed to death in rural Meem's Bottom near Woodstock, in Shenandoah County. So violent was the attack, The New York Times reported, the killers nearly severed her head. They stabbed her 16 times. She had agreed to testify against her gang friends.

As The Times explained it,

"The killing shook Shenandoah in ways that can be hard for urbanites to comprehend. For weeks following the discovery of [Brenda Paz], her murder was the talk of the towns along Route 11 in Virginia — from the dairy cooperative in Strasburg, to the C.E. Thompson & Son hardware store in Edinburg, to the old-fashioned lunch counter at the Walton & Smoot pharmacy in Woodstock, across Main Street from the sheriff's office. This sort of thing simply did not happen in a place where many families trace their ancestries in the region to before the Civil War, where people still take the time to stop in on their neighbors, where few people say they feel the need to lock their front doors. This was not Washington, 80 miles and a world away to the east. Folks here tended to worry more about copperheads and rattlesnakes than about knife-wielding murderers." [Hillbangers, By Matthew Brzezinski, August 15, 2004]

But "knife-wielding murderers" who belong to gangs are indeed what folks in the Shenandoah Valley have to worry about now. In 2005, law enforcement officials identified 100 gang members in Harrisonburg. Five years later, that number has jumped to 850 members and associates.

Among the gangs: SUR 13, the major Hispanic gang in Harrisonburg; MS 13; the Latin Kings.

A survey of area news reports shows that Hispanics are committing more than their fair share of the mayhem. Obvious conclusion: if they weren't here, illegal or not, SUR-13 and MS-13 wouldn't be here either. Illegal immigration is such that local law enforcement is treading water to keep up with the workload. Harrisonburg and its surrounding county, Rockingham, have detailed three police officers and a sheriff's deputy to work full time on a gang task force.

Aside from the crimes listed above, authorities filed at least 225 gang charges in 2009, the local newspaper reported, including malicious wounding, robbery, arson, larceny, credit card fraud, and, of course, gun possession as a felon. In November, a member of the Gangster Disciples was nailed on 46 charges. In October, a grand jury handed down an indictment with 71 counts against eight members of SUR-13 and one member of the Crips.

One of the first signs of gang activity is graffiti, or "taggings", which marks a gang's territory or presence. In June, the newspaper reported that police logged a major increase in taggings after gangs hit seven stores in Harrisonburg's main shopping strip in a nice section of the city. In 2007, gang graffiti and associated activity on the other side of town virtually ruined business in a small shopping center after an anchor store moved out. Gangs left their graffiti; prostitutes and public drinkers loitered in the parking lot. It became, the newspaper reported, "a gang-ridden hole" that terrified shoppers. Unsurprisingly, a night club catering to the city's Hispanics had moved into the shopping center.

In 2006, city police nailed one MS-13 member because he was involved in a fender-bender, the newspaper reported. His gang tattoos tipped off police. In other words, gang members are brazen and don't much try to hide who they are or what they are doing.

A side effect of the rise of Hispanic gangs has been something of a backlash among blacks. Gangs compete for territory. In at least one case, Hispanics have pushed blacks off their turf. An open air drug market in Harrisonburg near an elementary school, which blacks once controlled, is now under Hispanic management. Or should we call that "Latino?" [VDARE.COM note: Some activists like Latino better than Hispanic, because "Hispanic" suggests Spain, which is "historically white."  See Hispanics (Sorry, Latinos) Discover Racial Identity. What About Whites?, By Sam Francis, September 8, 2003]

The city's crime problem took a major turn for the worse with illegal Hispanic — oops, 'Latino' — immigration, and black victims of Hispanic violence sometimes strike back to send a message.

Gangs are fighting elsewhere in the Valley as well. About 70 miles north Interstate-81 from Harrisonburg and closer to D.C., Winchester has much the same problem as Harrisonburg. A member of the Bloods landed a 5-year prison sentence in Winchester for targeting a home associated with a SUR 13 member.

In 2007, a local television station reported that Winchester was home to 500 gangbangers who had residents on "high alert". The Bloods were largest gang with about 130 members, but the second largest was Sur-13 with 50-60 members. MS-13 boasted 30-40 members.

If the rate of increase in Harrisonburg holds true for Winchester, then the number of gang members there is also close to 850. So Harrisonburg and Winchester are now home to nearly 2,000 gang members. The number approaches the size of some small towns in the Valley—the population of Woodstock, the town where Brenda Paz was found sliced to pieces, is just 4,000.

In its story about gangs in the Valley after the murder of Brenda Paz, The Washington Post explained the situation succinctly:

"Law enforcement officials in the Shenandoah Valley say they believe sprawl from the inner suburbs is the main reason for an appearance in the last year or two of violent and largely Latino street gangs. But there are other likely reasons, including a well-established community of Latino immigrants in which to blend, including thousands of Mexicans and Salvadorans drawn here for jobs in the poultry, plastics and construction industries."[Gangs Find Bucolic New Turf in Va., By Michelle Boorstein, Washington Post, May 30, 2004]

"As far as law enforcement can tell, MS-13 gang members arrived on the scene in Shenandoah [County] early last year. For them, the Hispanic communities springing up around food-processing facilities across the country present an opportunity to expand their business interests — in particular, dealing methamphetamine — and to attract new members. (For now, the rise of rural gangs does not include African-American gangs, which remain based in large and midsize urban areas.)"

In other words, industries that draw large numbers of Hispanics, many of them illegal aliens, also draw gangs who exploit them and recruit new members, and as well move into an area that, for all intents and purposes, is open territory.

Illegal aliens in particular and immigration in general is a major issue — and expense — for taxpayers. Harrisonburg's newspaper reported in October that 13 percent of residents in 2008 were foreign born, and 78 percent of those were not citizens. And 81 percent of surrounding Rockingham County's 3,659 foreign-born residents were not citizens.

Naturally, their children must be educated, so city and county schools are spending millions on English-As-A-Second-Language programs. In May, the local newspaper reported that 1,751 of the city's 4,232 students, about 41 percent, require ESL at a cost of more than $1,400 a head.

At $2.45 million for ESL in the city alone, taxpayers are groaning under the weight of immigrants without counting the crime. At least 75 percent of ESL spending targets Hispanics.

Needless to say, officials told the newspaper, "we embrace the diversity". Yeah, right. Whether the Valley's white and black families whose ancestors have lived there since the late 18th century embrace all this diversity, we are not given to know. We do know they have not been asked.

Gangs aside, immigrants caused myriad other problems. Prosecutors frequently jail Hispanic males who beat their wives and molest children. Because many of the victims are illegal aliens, prosecuting the offender becomes problematic because the victims fear deportation.

That poses a real problem for prosecutors. No human being deserves to be raped or otherwise molested, regardless of immigration status. But if a victim is an illegal alien, it affords a measure of protection for the rapist or molester.

And as with illegals in other cities, immigrants in the Shenandoah Valley drink, drive and kill, and they are frequently involved in shootings and other violence.

The newspaper doesn't appear to have published numbers for 2009. But one needn't be a pessimist to know things haven't much improved. Nothing, after all, has changed with border enforcement.

In early February, Immigration and Customs Enforcements picked up a dozen of Harrisonburg and Rockingham's "criminal aliens" in a wide-ranging raid of employers here and in Northern Virginia and Washington, D.C.

Presumably, the authorities will deport them. And local law enforcement officials want the illegals kept out once they are deported. But like a successful second marriage, this expectation may be the triumph of hope over experience.

Where is Stonewall Jackson when we need him?