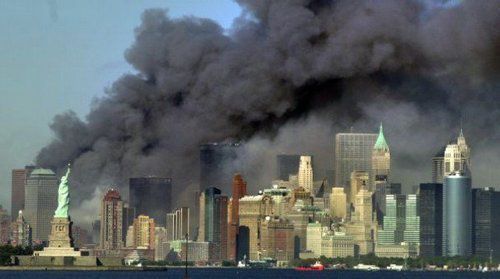 Three Years After 9/11: Is The Tragedy Just Beginning?

[See also 09/23/01 - For them… life is going to be miserable and A Reasonable Chinese Immigrant Reflects On 9/11; Peter Brimelow Responds]

Despite the triumphalist rhetoric of the recent Republican convention, where 9/11 and the subsequent American invasions of the Middle East are clearly seen as the defining issue of the Bush Presidency—and, tacitly, an answer to the party's chronic problem of motivating its neglected and immigration-inundated base—the third anniversary of the terrorist attacks must be viewed as a somber occasion.

Directly after 9/11, I noted that the answer to terror had two parts: war abroad and immigration reform at home. I said VDARE.COM would not take an editorial position on the efficacy of war abroad (although the syndicated columnists we carry because of their support for immigration reform do write both for and against the war). But we would continue to emphasize the second part of the answer: immigration reform at home—to paraphrase President Clinton's campaign theme: "It's The Immigration, Stupid." Every one of nineteen 9/11 hijackers was an illegal immigrant by definition. None of them told the U.S. immigration authorities what they intended to do.

The war in Iraq has now claimed more than 1,000 American dead, the great bulk of them since President Bush proclaimed that major combat operations had ceased in May 2003. Incisive critics argue that the military situation is much worse than generally realized. National Guard units, including that of our own Allan Wall, are still being mobilized for Iraq. Even optimists concede no end is in sight.

Meanwhile, the 9/11 Commission found that Iraq was not involved the attacks. And Iraq appears to have had no "weapons of mass destruction." It's as if the U.S. responded to the Japanese bombing of Pearl Harbor by invading China—possibly desirable, but oddly off-topic.

Whatever you think of all this—and as a British-American who grew up in a dissolving empire, I have to say Iraq and Afghanistan look depressingly like typical doomed colonial wars—it has to be said that at the very least the Bush Administration's answer to 9/11 has been totally disproportionate.

In contrast to the enormous national effort expended on the war abroad, there has been absolutely no statutory and essentially no executive branch action on immigration reform at home. And incredibly, President Bush's Homeland Security Undersecretary Asa Hutchinson has just celebrated the 9/11 anniversary by telling reporters that it is "not realistic" to reduce the 8-12 million illegal aliens now in the U.S. and that it is "probably accurate" that no law enforcement officers are looking for them. ["Rounding up all illegals 'not realistic,'" by Jerry Seper, Washington Times, September 10, 2004.]

Ed Rubenstein supplies these compelling numbers: there are about 9,500 personnel in the Border Patrol. There are 125,000 U.S. military personnel in Iraq. The "Customs and Border Protection" part of the Homeland Security Budget amounted to some $6 billion in fiscal year 2005— including things like agricultural inspections unrelated to terrorism. The Iraq war will probably cost at least $150 billion. ["Report: The 'real' costs of the Iraq war," by Hannah K. Strange, Washington Times, July 4, 2004.]

Indeed, the Bush Administration has actually made the immigration situation worse. On the second anniversary of 9/11 last year, the groundswell of opinion in favor of immigration reform had become so pronounced that I suggested a litmus test would soon be necessary to out opportunistic Beltway weather vanes like the editors of National Review.  But I never got to detail my litmus tests because of Bush Administration's extraordinary amnesty-cum-guest worker proposal launched on Christmas Eve.

Of course, the Bush proposal stalled because of intense, if inchoate, resistance from the grass-roots. But that also happened to Bush's earlier amnesty proposal, dead in the water long before 9/11. Whatever promises he had made to Vicente Fox were obviously inoperative for security reasons alone after 9/11. But the Bush commitment to amnesty and mass immigration appears to be beyond the reach of reason. It will certainly be renewed if he wins re-election.

Bush's policy after 9/11 has been what Steve Sailer has aptly called "Invade the World—Invite The World." At a minimum, the two components of this policy are contradictory. Quite possibly, they mean that the tragedy of 9/11 is just beginning.