The Return of Leftist Assassination Fascination In The Age Of Trump

Alert the CDC: Left-wing America has been overcome by another contagious epidemic of assassination fascination. It's time to declare a public health crisis.

In Cleveland, unhinged 24-year-old Zachary Benson tweeted his "life goal is to assassinate Trump." The hashtag #AssassinateTrump surfaced on Twitter, along with a flood of bloodthirsty death wishes.

Another #AssassinateTrump threat came from Atlanta public transit employee Aleama Philips, who tweeted, "I wish I had the balls to kill him myself," illustrated with a photo of Trump dead and riddled with bullets. She was fired by the Metropolitan Atlanta Rapid Transit Authority last week.

In San Diego, the loony (and now former) CEO of cybersecurity firm PacketSled, Matt Harrigan, took to Facebook on election night to declare: "I'm going to kill the president." He further threatened that he was "getting a sniper rifle and perching myself where it counts. Find a bedroom in the White House that suits you, [expletive]. I'll find you."

In the music world,Rick Ross vowed to "assassinate Trump like I'm (George) Zimmerman."

Inevitably, the Kill Trump mania has spread overseas. French radio host Pablo Mira reportedly gloated: "Donald Trump and his victory have given a hope in the American people—the hope that he would be killed even before his inauguration."

Where is your condemnation of these perverted incitements to violence, President Obama?

Where are you, media concern trolls, to bemoan the anti-Trump culture of hatred and climate of intolerance?

AWOL, of course. The Blame Righty crowd that has falsely blamed random shootings and suicides on conservative talk radio, the tea party, right-wing blogs and Fox News is nowhere to be found when left-wing violent extremism rears its ugly head.

Double-standard-itis is a chronic and recurring condition, accompanied by politically expedient amnesia. Assassination chic was all the rage when George W. Bush took office and extended throughout his two terms in office. I remember—even if the civility and tolerance police at The New York Times don't.

Protesters displayed signs of a decapitated Bush gushing blood from his neck and slogans proclaiming "Bush—the only dope worth shooting." 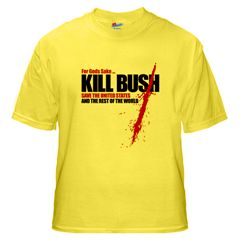 Former Democratic Kentucky Governor Steve Beshear joked: "When I mention that Democrats are problem solvers, I can think of only one Republican who can be a problem solver—that is Vice President Dick Cheney (who accidentally shot a hunting companion in 2006) if he would just take George on a hunting trip."

Sarah Vowell wrote "Assassination Vacation," a best-selling murder travelogue of assassinated Republican presidents, in which she confessed she was so crippled by hatred of Bush that she couldn't even write his name and admitted that her "simmering rage against the current president scares me."

Across the pond, Guardian columnist Charlie Brooker lamented Bush's election with a screed asking, "John Wilkes Booth, Lee Harvey Oswald, John Hinckley Jr.—where are you now that we need you?"

British docudrama "Death of a President" imagined the assassination of Bush by a gunman at the Chicago Sheraton hotel after an anti-war rally.

And Code Pink poster woman Cindy Sheehan penned an autobiography in which she confessed her presidential murder fantasy—going back in time and killing the infant Bush in order to prevent the Iraq War. She admitted she had entertained this infanticidal fantasy "often."

From "Kill Bush" to #AssassinateTrump, the naked hypocrisy of the "love and peace" left is on full display. Spare us the lectures about diversity, tolerance and safe spaces. Look in the mirror. Put down the haterade. Seek help.