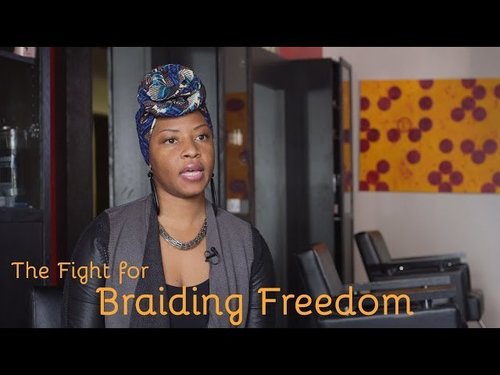 The Beltway Right specializes in launching well-publicized crusades on tangential issues, especially those that can be used in pointless pandering to minorities. Both Jeb Bush and Rand Paul seem to have put nonwhites at the center of their presidential campaigns, and not surprisingly, a new poll shows the largely white Republican base doesn’t seem to care about them [Poll: GOP Establishment candidates falling, by Eric Bradner, CNN, August 17, 2015]. Yet that isn’t stopping Conservatism Inc. from becomingly wildly excited about one of Barack Obama’s recent initiatives—cracking down on state occupational licensing requirements that affect immigrants and minorities. And the man at the center is the same one who co-wrote Jeb Bush’s forthrightly anti-American book Immigration Wars: Clint Bolick.

The White House later released a report, Occupational Licensing: A Framework for Policy Makers, which declared that such a regulation “creates substantial costs” and observed that “the requirements for obtaining a license are not in sync with the skills needed for the job.” Moreover, it claimed, there is evidence “that licensing requirements raise the price of goods and services, restrict employment opportunities, and make it more difficult for workers to take their skills across State lines.” The report cited Milton Friedman, the Cato Institute, and the American Enterprise Institute.

Not surprisingly, many conservatives and libertarians are praising the report. Reason described it as “a good sign or first step” [Occupational Licensing Hurts Just About Everyone, Says White House, by Elizabeth Nolan Brown, July 31, 2015]. Similarly, Instapundit’s Glenn Reynolds called it a major step forward for local economic freedom because it’s “one thing for libertarian economists and lawyers to argue for a position, and it’s another for it to be endorsed by a Democratic White House” [White House leans right on licensing, USA Today, August 2, 2015].

Both the report and libertarian commenters mention that these licensing laws harm immigrants. The report notes immigrants

must often complete duplicative and costly requirements in order to acquire a U.S. license in their chosen career. In many cases, the training or experience that these immigrants acquired overseas does not count toward fulfilling the relevant licensing requirements.

For example, the report says that in Illinois, “If an engineer earns a degree from most universities abroad, she [sic] must submit proof that she worked under a U.S. engineer for four years; other work experience abroad will not suffice.”

Much of the libertarian commentary repeated this complaint. I decided to look up the source. It came from the Illinois Coalition for Immigrant and Refugee Rights, which bemoaned the fact that engineers who attended schools “not accredited by the Accreditation Board for Engineering Technology (ABET)” have to meet the additional prerequisite [Foreign-Educated Engineers: Barriers to Employment and Professional Relicensing in Illinois, by Fanny Lopez, et. al., 2014].

But it turns out ABET has bilateral recognition agreements with foreign accreditors and will accredit foreign schools in countries without agreements [Global Presence, ABET]. However, there is a difference between a degree from Cal Tech and Calcutta Tech. Is it so unreasonable for Illinois to have a few extra requirements for those who did not graduate from accredited universities?

[L]icensing laws often contain blanket exclusions for the formerly incarcerated or those with criminal records, regardless of whether their records are relevant to the job for which they are applying. This renders a great number of individuals – as many as one in three Americans has some form of criminal record (either for an arrest or a conviction) – ineligible for a large share of jobs, in turn perpetuating unstable economic situations for these individuals.

This claim is justified by citing a paper from the left wing Center for American Progress. Yet that paper does not cite any such law [One Strike and You’re Out, by Rebecca Vallas and Sharon Dietrich, December 2, 2014].

I honestly cannot imagine a single state law that has blanket exclusions for people charged with, but not convicted of, a misdemeanor. The only example the White House provides are laws that bar convicted felons from certain licenses.

Surprisingly, the White House report does not complain that laws restricting immigrants and/or criminals from obtaining licenses have a “racist” disparate impact. However, libertarians have already laid the groundwork for that. As both Reason and Reynolds noted, the libertarian legal advocate, the Institute for Justice [IJ], has fought state level licensing reforms in the courts for over two decades.

The Institute was founded by Clint Bolick, a self-described “bleeding heart libertarian” who recently coauthored Immigration Wars with Jeb Bush. Under Bolick’s leadership, IJ launched a number of lawsuits against hair braiding regulations.

A principled libertarian stance would require all licensing laws to be abolished. However, the Institute for Justice pushes the more palatable legal argument that it’s unfair to require braiders to "to learn totally irrelevant things" to receive their license [Standing Up for Natural Hair Braiders’ Right to Earn an Honest Living, Braiding Freedom.com].

Yet creating a separate license for hair braiding would increase the government’s cost of enforcing regulations. Moreover, if someone wished to do both African braiding and other types of hair styling, then they would need to get two licenses. Just as regulations can be overbroad, they can be too narrow. Assuming we admit the legitimacy of licensing, there’s something to be said for requiring general knowledge, as with requiring lawyers to pass a bar exam that contains subjects they may never use in practice.

Nonetheless, IJ made hair braiding regulations their poster-child for intrusive and unnecessary regulation, partially because minorities have a hard time passing tests. Bolick’s book, Changing Course: Civil Rights at the Crossroads, charges: "Like Jim Crow laws, contemporary licensing requirements are administered in the form of examinations." Bolick disapprovingly cites a study which found "blacks... and other specific groups are more likely to fail written licensing examinations" and complains that beautician exams require "mastery of the English language" [p. 99-100, 1988].

So it’s not surprising IJ’s first hair braiding lawsuit was issued on behalf of Taalib-Din Abdul Uqdah, Pamela Ferrell, and Cornrows & Co against the DC Board of Cosmetology. As IJ explained, Cornrows and Co.

[S]pecializes in hair braiding, extensions, and cornrows, and it trains and employs highly trained braiders to create intricate and artistic hair styles that trace their origins thousands of years to Africa. A classic example of bootstraps capitalism, Cornrows & Co. soon flourished, providing a popular service to the community. [Challenging Barriers To Economic Opportunity, by Clint Bolick and David Legge, IJ.org]

The case was dismissed, but DC eventually exempted hair braiders from the requirement.

Did this turn Ferrell and Uqdah into free market leaders in the minority community? Hardly. Instead, they began anti-libertarian litigation against private companies. According a profile of Ferrell,

[Hair Me Out: The Road to Growing an Afro, by Karim Orange Huffington Post, December 15, 2011]

Though Bolick left in 2004, IJ still continues to push hair braiding as its hallmark. It has filed eight lawsuits challenging hair braiding regulations, some of which succeeded, and maintains a special “Braiding Freedom” initiative with six white attorneys.

That’s more than the number of attorneys working for the Immigration Reform Law Institute—the only patriotic immigration reform legal advocate in the country.

I have no doubt that many professional licensing requirements are too burdensome. However, these are issues that should be addressed on the state and local level. The rationales from the Obama administration and the “bleeding heart libertarians” suggest that federal oversight of state licensing will likely result in narrow changes to regulations that affect felons, immigrants, or racial minorities, rather than constituting meaningful expansion of economic liberty for everyone.

But it will allow them to signal how much they want to help nonwhites, instead of having to take on controversial issues. And that makes all the difference.