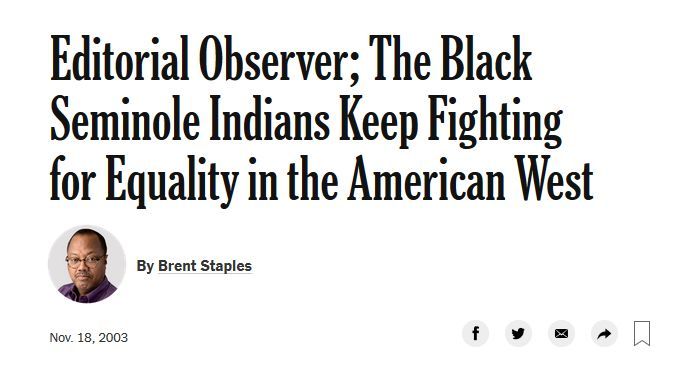 The Fulford File, By James Fulford | Some Are Indeed More Equal Than Others

Brent Staples, the black columnist (he reports he has Cherokee blood) published a piece in the November 18 New York Times about the Black Seminoles.  This is the group in the southwest whose ancestry comes from both the Seminole Indians in Florida and from escaped slaves and freedmen.

Black Seminoles fought against American civilization in the Florida swamps, and for it on the Western Plains, where they were scouts for the U.S. Cavalry. (Staples mentions only the Florida part, of which he seems to approve.)

Some modern Seminoles don’t consider them real Indians, and the black Seminoles receive only some of the benefits that Indians get from the Bureau of Indian Affairs.

It turns out that Indians are more racist than white people (this is not quite how Staples puts it), for when a Black Seminole woman

"…challenged rules that barred blacks from receiving benefits, some other members told her to ‘go back to Africa’ and referred to the black Seminoles as ‘cattle’ while mooing and stamping their feet in the meeting hall. Ms. Davis was threatened with death after she persuaded a young civil rights lawyer, Jon Velie, to file the first of several suits against the tribe and the government. Reactionaries seized control of the tribe and expelled the Freedmen, along with Ms. Davis."

The odd thing about this article is its title: "The Black Seminole Indians Keep Fighting for Equality in the American West."

What the someone who seeks to be classified as an Indian is seeking is not "equality" but racial special privilege.

"But the decision to grant black Seminoles second-class benefits — while excluding them from the health, prescription and housing benefits that are given to other Seminoles — has strengthened Ms. Davis’s resolve to fight on."

[All emphases are mine, if you haven’t guessed.]

All those federally funded goodies are not what most people mean by "equality," what Abraham Lincoln called, in the Lincoln-Douglas debates, "common right of humanity."

Instead they represent the "divine right of kings."

If you are born an American Indian, you have the right to a variety of special privileges and immunities which neither whites not blacks can claim.

The immunities include immunity to gambling laws and tobacco taxes, and even sovereign immunity from the Civil Rights laws! (The only part of the package of which Mr. Staples disapproves, since it reminds him too much of States Rights.)

The privileges that come with Indian birth include a large share of the (mostly white) American taxpayer’s dollar. A piece of this interracial wealth transfer is what the Black Seminoles are fighting for.

To quote Lincoln in the Lincoln-Douglas debates again:

"It is the same principle in whatever shape it develops itself. It is the same spirit that says, ‘You work and toil and earn bread, and I’ll eat it.’ No matter in what shape it comes, whether from the mouth of a king who seeks to bestride the people of his own nation and live by the fruit of their labor, or from one race of men as an apology for enslaving another race, it is the same tyrannical principle."

I suppose the Black Seminoles have as much right to this kind of graft as the paler kind of Seminole.

But don’t call it "equality."