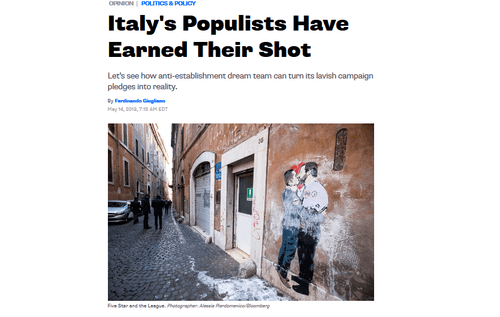 Welcome to VDARE RADIO and I’m your host Virginia Dare.

It’s the ultimate nightmare for the European establishment, which means it is a dream for patriots. It looks like the nationalist Lega party and the populist Five Star Movement are going to be joining forces to create a new government for Italy.

Steve Bannon suggested an alliance between the Five Star Movement and Lega would be the "ultimate dream" for populists. While unlikely, it is now a possibility, and would certainly be the ultimate nightmare for the EU. The real question is whether the Five Star Movement wants to participate in government at the national level, or whether it intends to remain in more or less permanent opposition.

Now, with the Five Star Movement’s openness to participation in government, EU bureaucrats who want to keep stripping European nations of sovereignty and neoconservatives who want to keep increasing tensions with Russia are in a panic. And needless to say, most of the Main Stream Media is in hysterics. Consider this headline from the UK Express. “Today Italy gets first right wing ‘populist’ government since Mussolini” [by Alice Scarsi, May 14, 2018]

Not quite. As even Bloomberg reluctantly conceded, the populist coalition has earned the right to govern and possesses democratic legitimacy. [Italy’s Populists Have Earned Their Shot, by Ferdinando Giugliano, Bloomberg, May 14, 2018]

The Five Star Movement and Lega are natural allies because each party is relatively strong where the other party is weak. Lega, formerly the Lega Nord, a secessionist party, is strong in its power base of Northern Italy. The Five Star Movement, in contrast, dominated southern Italy. [Italy’s Populists Redraw Political Map, Split Country in Half, by Gregory Viscusi and Hayley Warren, Bloomberg, March 6, 2018]

Those looking for ideological unity are sure to be disappointed. Labels such as “right” and “left” are a bit difficult to pin on the two parties. Lega had an alliance with former Italian Prime Minister Silvio Berlusconi’s center-right party during the elections, but it actually outperformed its more establishment ally. Meanwhile, the Five Star Movement, created by a former comedian, has an idiosyncratic platform that borrows from both the left and right. In recent years, it seems to be moving closer to a nationalist position, especially on issues such as immigration and European integration.

One thing that is clear is that the new populist government is going to be pursuing policies that are far different than anything Conservatism Inc. would support in the United States.

There’s no firm agreement yet, and this being Italy, anything could happen. [Political instability drags in Italy with populist parties split on key issues, by Silvia Amaro, CNBC, May 15, 2018] Yet assume for the moment this happens. It is significant on two levels.

First, it shows that all the rhetoric about right/left being replaced by populist/establishment is now translating into real political alliances. Secondly, it shows that there is some creative thinking taking place about actual policies. It’s not just the same program as it would have been if the center-right or the center-left had won.

There was a glimpse of something like this taking shape in our country during the 2016 election. You saw populist alliances opposing the Trans-Pacific Partnership, neoconservative foreign policy, and neoliberal media bias. These forces generally rallied behind the candidacy of Donald Trump.

Unfortunately, since taking office, President Trump has largely governed as a movement conservative. Conservatism Inc. is showing no signs of rethinking its policy preferences. And rather than championing populist, Trumpian policies on trade and immigration, the GOP House is going to vote on more regulatory relief for banks. [Three questions as House reg relief vote nears,  by Joe Adler and Neil Haggerty, American Banker, May 9, 2018] As if the crowds showing up to those huge Trump rallies were coming because they thought the government was too hard on banks.

What is needed is something like a “national populist” agenda for America that combines patriotic policies on immigration with legislation that can build a new nationalist majority by appealing to the working class. Italy may show the way forward. Rather than looking to Conservatism Inc. for answers, patriots who are concerned about America’s future should be looking to Italy.