Surprise! Sanders’ Supporters Less Affluent Than Clinton’s—And Telling Them To “Check Their Privilege” Won’t Win Them Back

A significant fraction of Bernie Sanders supporters still can’t stomach Hillary Clinton. Her lead in the polls shrinks significantly when voters are given the option of Third Party candidates. The Libertarian ticket usually pulls more Republicans than Democrats, but because of disgruntled Sanders supporters they seem to be split in this election. And as Fox News reports, the Green Party’s Jill Stein has successfully  “appealed to Bernie Sanders supporters vowing to oppose Clinton’s candidacy”. [Recent polls show Trump gaining on Clinton when 3rd-party candidates considered, August 16, 2016] Leftist enforcers in the MSM have responded with race-shaming—further evidence of divisions in the Democratic coalition, and a tactic that might well backfire.

The disgust of Sanders supporters is further illustrated by a FiveThirtyEight analysis of Sanders supporters. In a head-to-head match, Clinton received 65%-91% of their support, with Trump receiving between 6%—14% of Sanders voters. But when they were given an option for a Third Party, Clinton’s support fell to 49%-69% [About A Third of Bernie Sanders’s Supporters Still Aren’t Backing Hillary Clinton, by Harry Enten, August 8, 2016]

The ultimate effect of the Bernie Holdouts remains to be seen, but this is not a new phenomenon. Whenever an ideological candidate with a strong following loses in the primaries, whether it’s Pat Buchanan, Ron Paul, Jerry Brown or Howard Dean, strategists and pundits try to figure out what they will do in the general election—support the party’s nominee, support the other major candidate, support a Third Party, or stay home.

The nominee’s supporters will typically use arguments along the lines of “don’t make the perfect the enemy of the good,” or “you must choose the lesser of two evils.”  However, Clinton’s supporters chosen a different tactic against Bernie-or-Bust Brigade: accusing them of “privilege.”

How privileged do you need to be to imagine that it’s a good idea to risk the actual lives of vulnerable Americans because you “hate” Clinton so much that you vow to stay home if Sanders doesn’t get the nomination? How protected from the consequences of a Trump presidency do you need to be to think your hatred of Clinton constitutes, as I saw someone say earlier this week, an ‘inviolable principle,’ meaning that it’s more important than the lives of vulnerable Americans?”

The gist of all these complaints: Bernie Sanders’ supporters are privileged enough to survive Trump’s presidency so they can afford to be ideologically pure, while “vulnerable” groups face an existential threat from Trump.

Some put this in purely racial terms. One black columnist claimed: “A Trump presidency will likely have no impact on white folk’s lives, but for minorities, well, we don’t have the luxury of being “Bernie or Bust” supporters.”[The White Privilege of Bernie or Bust Puts Minority Lives at Risk of Living in a Trump Presidency, by Quiana Fulton, Inquisitr, August 7, 2016]

My comment: All of this is completely wrong. By conventional measures—wealth and education—White Clinton supporters are much more “privileged”.

As the New York Times’ Nate Cohn reported at the beginning of the primary season, “the big difference” between Bernie and Hillary voters “is class and income.” Sanders had a "less affluent coalition" while Clinton adopted a "more pragmatic message that may have more appeal to affluent voters.” [A Key Divide Between Clinton and Sanders Supporters: Income, February 4, 2016].

Below, I compiled exit polls, looking at the groups that could be considered privileged: high income earners and those with postgraduate degrees. All the numbers which are bolded indicate that Hillary Clinton outperformed among these groups. [Compiled from Democratic Exit Polls, CNN] 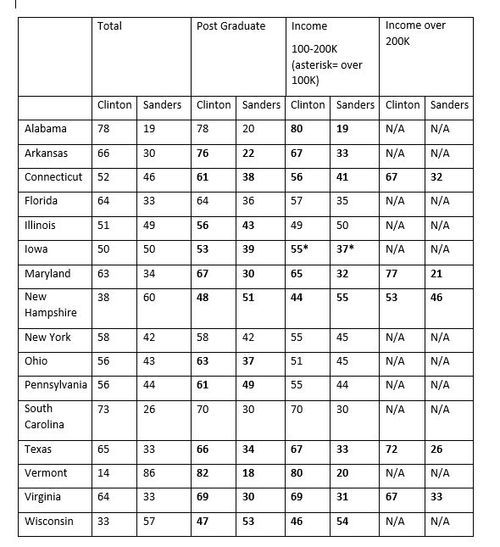 As you can see, Hillary Clinton outperformed Sanders in higher-income groups in almost all states, the few exceptions being those with large non-white populations.

The Daily Beast’s Barett Pitner tries to square this circle, by describing any economically progressive agenda as suffering from white privilege:

Sanders’s class-based, inequality and economy focused agenda was not intended to stoke racial divisions, but even progressives are impacted by the class and race-based structures that American society has been built upon.

His argument: while minorities don’t like Wall Street and big banks in theory, “many of the economic and social injustices we face exist on Main Street” and that “while Sanders may see this distinction, some of his supporters appear not to.” Thus by focusing their attention on Wall Street, Bernie’s "young, white and privileged" supporters appear incapable of realizing the oppression faced by blacks—the “issues and the lives of others had become 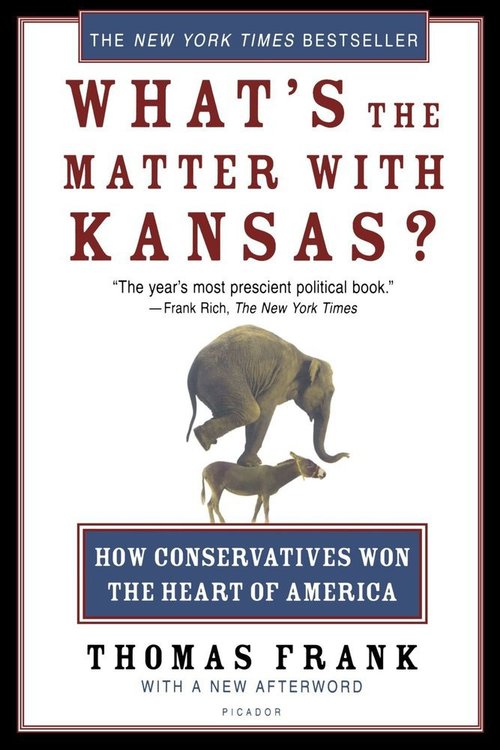 irrelevant." [The White Entitlement of Some Sanders Supporters, June 5, 2016]

The Left used to bemoan that Republicans had tricked working class whites into voting against their class interests by appeals to social issues and race—most famously expressed in Thomas Frank’s What’s the Matter with Kansas. Now Clinton is demanding that whites vote against their economic interests, on trade and (unmentionably) even immigration, to elect her so she will help non-whites.

Frank is not a Trump supporter, but he at least acknowledges this disconnect:

As our modern Clintonists of 2016 move instinctively to dismiss the concerns of working people, however, they should keep this in mind: those people may have finally found somewhere else to go.

[Hillary Clinton needs to wake up. Trump is stealing the voters she takes for granted, Guardian, July 28, 2016]

Telling working class progressives to “check their privilege” while enacting pro-plutocratic policies gives affluent Hillary supporters a new group of poorer white people to feel morally superior to.  However, it's not likely to win many Bernie Sanders' holdouts to her campaign.

If Hillary and her apologists continue this condescending strategy, Trump may win more of the "Bernie or Bust" vote than anyone could have predicted.