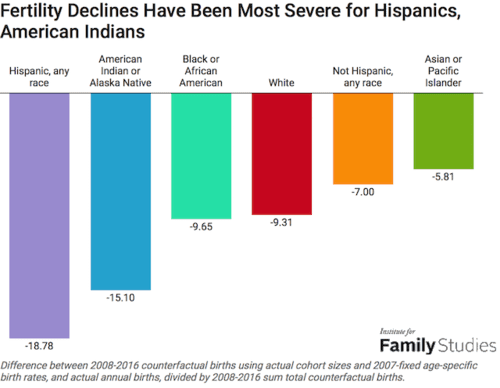 “Hatched, matched, and dispatched”—my mother’s term for the births, marriages, and deaths columns in our local paper.

What's mainly happening in the hatcheries: a slowdown of business. Americans are not making as many babies as we used to: Births plunge to record lows in United States, MSN, May 17, 2018. The report is about the latest numbers on fertility from the CDC, the Centers for Disease Control. 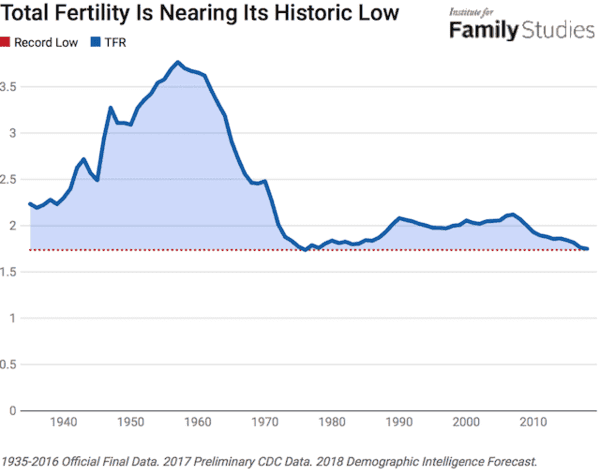 The key number here: Total Fertility Rate, or TFR. That's the average number of children a woman will have in her reproductive lifetime at present rates. So we assume that when she's twenty-five, she'll reproduce at the rate twenty-five-year-olds are reproducing at today; when she's thirty, she'll reproduce at the rate thirty-year-olds are reproducing at today; and so on. That's the TFR.

For a stable population, one that's neither increasing nor decreasing, you need a TFR a tad higher than two per woman, to allow for people who don't reproduce.

This actually seems to be happening. From the MSN report:

The only group that saw an increase in births were women aged 40-44, said the report. Whether they can't afford children, or they have access to contraception and simply prefer to wait, women in their 20s and 30s continue to put off having children in America. This is a general trend that has been visible in the data—with a few ups and downs—since the 1970s.

What's that? You want to know the breakdowns by race? Shame on you! 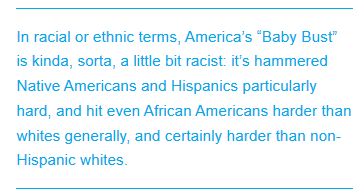 Since you ask, though, here's a different summary of the CDC figures at the Institute for Family Studies website: Baby Bust: Fertility is Declining the Most Among Minority Women, by Lyman Stone, May 16, 2018.

That's right. Where the Baby Bust is concerned, you can bring out the old New York Times cliché: "minorities hardest hit." The biggest decline across the last decade has been among Hispanics, who went from 2.85 to 2.1, a drop of 36 percent.

Hispanics started high, though. Aborigines—American Indians and Alaska natives—started lower, with a TFR of 1.62, and dropped to 1.23 across the decade. Nobody's sure why.

Black fertility dropped from 2.15 births per woman to 1.89. Non-Hispanic whites went from 1.95 to 1.72, a comparable drop from a somewhat lower start point. 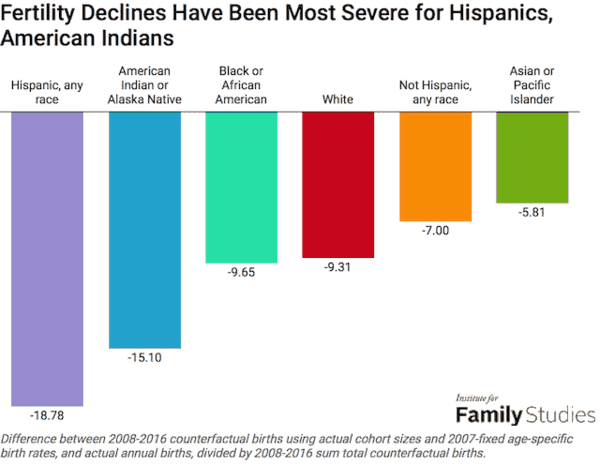 As you can tell, the CDC report is a treasure trove for us math geeks. You could get a couple of Ph.D. theses out of these numbers.

There's a political angle, for example. As that second study, the IFS study, reports, the TFR has fallen in every state, except, mysteriously, North Dakota.

However, it's fallen more in states Hillary won in 2016 than in Trump states. The old conservative jeer against liberals, that we'll just out-breed them at last, may actually be coming true.

The general decline of interest in sexual intercourse must also be playing in to these numbers somehow.

I have often reflected on how odd it has been, across my own lifetime, to see the general decline in libido all over the Western world. Fifty years ago—I was there, reader, I was there—when not one citizen in a hundred had a gym membership, and halitosis and body odor were common, and the male-female imbalance in workplaces, clubs, sports, schools was way more marked than it is today, making it harder to get to know the opposite sex; back in those benighted days—with all those disadvantages and deterrents, the people of the West were going at it like rabbits.

The young adults of today, contrariwise, with their buff bodies, perfect dentition, and daily showers, with sex segregation actually outlawed almost everywhere—heck, we even have women on submarines today—they can't be bothered. From a report in Maxim magazine last July, based on a different set of numbers from the CDC.

The CDC report is called Sexual Activity and Contraceptive Use Among Teenagers in the United States, 2011–2015, June 22, 2017 [PDF], but the Maxim column is called  Here's Why Millennials Are Having Way Less Sex Than Generation X The reason is actually pretty shocking..., Zeynep Yenisey, Jul 7, 2017.

Maxim is a “lads” magazine, filled with pictures of women that young men would be having sex with…if they could  be bothered.

This image is the one use to illustrate the ladies of the former age—Sophia Loren in Yesterday, Today and Tomorrow.

It's fascinating to watch these strange currents in human tastes and behavior. What do they tell us? What, if anything, should we do about them?

This is an area where any thoughtful person can develop opinions and arguments.

One thing is clear, though: triumphalist Democratic predictions about the imminent Election of a New People through immigration policy may be, er, exaggerated.

Fascinating. If I could have my time over again, I'd become a demographer.