Why Ted Cruz Is Not A True Latino

The day after Ted Cruz won the Iowa caucuses, La Opinión, the biggest Spanish-language newspaper in the U.S., published  Ted Cruz, primer latino en ganar en Iowa ¿Por qué no estamos celebrando? (by Pilar Marrero, February 2, 2016) which translates to “Ted Cruz, first Latino to Win in Iowa, Why Aren’t We Celebrating?” Note that “we” does not mean “Americans.”

The name on his birth certificate is Rafael Edward Cruz, born in 1970 of father Rafael Bienvenido Cruz, who was born in Matanzas, Cuba and of Eleanor Elizabeth Wilson, of Wilmington, Delaware. Theoretically then, Ted Cruz, the victor of the Iowa caucuses for the Republican Party, should be considered in the United States as part Latino or simply as one more Latino.

Why then is there not a great headline on all the newspapers proclaiming the triumph of the first Latino candidate in the Iowa caucuses? Where are the declarations of national Latino organizations, declaring the triumph of Cruz for the first time in the history of the country, in the famous caucuses? Or the third place of Marco Rubio?

The answer is complex and depends upon the meaning each person gives to the “Latino” identity…. [My translation]

So “we,” of course, refers to Latinos. Marrero’s article is a discourse on “Latino” identity—and, for those of us whose identity is “American,” it’s bad news:

For both Cruz and Rubio, it has less to do with the nationality of their parents and more with their ideas, the form in which they themselves identify or present their political positions on topics of great importance for the Latino Collective in the United States

Note the term “Latino Collective”—el colectivo latino. “Latino” as used in the U.S. is an elastic term. It isn’t really racial term, but for activists who think like Marrero [email/Tweet her], it’s not really cultural or linguistic either: It’s political.

And it doesn’t seem compatible with the old model of immigrant assimilation. Marrero writes:

Between Cruz and Rubio….there are some notable differences. Cruz does not self-identify as a son of immigrants or as Latino, although on occasion has referred to himself as ‘son of a Cuban refugee who escaped oppression”…. Never, until now, has Ted Cruz been heard speaking Spanish in public and in his speech on Monday night (February 1st) he principally identified as a “Christian”. 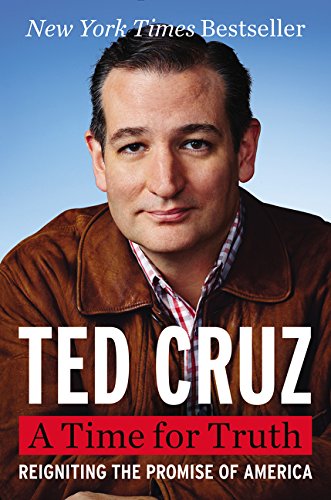 Cruz says in his autobiography A Time for Truth (does every candidate have one?) that his schoolmates made fun of him for being called “Felito,” rhyming it with “Fritos, Cheetos, Doritos and Tostitos.” So Cruz started going by “Ted,” from his middle name Edward, though his father wasn’t happy about it.

Marrero contrasts this with Rubio, who still utilizes “Marco” rather than “Mark”.

Moreno quotes Francisco Barbosa [Email him] a history Professor at Metro State University in Denver, who admits “the term ‘Latino’ in its modern version was invented in the United States and really doesn’t exist in Latin America.”

For me the Latino political space is reserved for persons who recognize the common struggles of the persons of Latin American origin in the United States….If you call yourself Latino you must act thusly.” [Emphasis added]

Therefore, Barbosa argues: “Under my definition, Ted Cruz is not a Latino”.

Cruz has supposedly forfeited his identity because, according to Marrero, he has:

[W]ounded the sensitivity of the majority of politically active Latinos in the United States by taking extreme positions on immigration and surrounding himself with personalities considered hostile towards immigrants, such as Sheriff Joe Arpaio and Congressman Steve King of Iowa, one of the most hardline immigration restrictionists in the House of Representatives. Most Latino Republicans have closed ranks behind other candidates, such as Jeb Bush or Marco Rubio. [Links added]

But this isn’t true. According to a recent poll, Donald Trump is actually the favorite among Latino Republicans with 38% as opposed to 15% for Cruz—and just 8% for Rubio!

And what is this constant emphasis by Hispanderers on “sensitivity?” In essence, they’re saying we can’t discuss important issues which might hurt Latinos’ feelings.

Of course “extreme positions on immigration,” just means the shocking idea that American immigration laws might actually be enforced.

…the economy, health and immigration, are issues that are constantly among the most important for Latinos in the United States. In that sense Senator Cruz has been opposed to the issues that the majority of Latins consider important, at the same time he has distanced himself from his cultural identity as a Latino.

Of course Cruz has not ignored the “economy, health and immigration.” He just doesn’t agree with Hispanic Leftists on what to do about them.

Alex Veras, a Republican activist in Massachusetts, was quoted drawing a contrast between Cruz and Rubio:

[Cruz] has absolutely no sympathy for the Latino people. Now Rubio speaks hard because he is in a Primary, but his record as a senator is very different.

That’s an interesting admission—that Rubio can say one thing in the campaign and do another thing in the Senate. But we knew that.

To be Latino, then, is more than an ethnic or national origin. In the case of Cruz, has not worked to create links or even to recognize the struggle of the immigrants or of the other Latinos.

On the contrary, he seems to have rejected them. This removes him from the Latino identification, says Alejandro Jose Gradilla, Professor of Chicano studies at Cal State Fullerton.

This Gradilla  [Email him] went on to say that a true Latino must “recognize the community,” and “recognize that this community exists and that it has a certain identity and ideas.”

In other words, to be a real “Latino” you must support Open Borders for Latinos and Latino triumphalism in an American context. If you don’t, you’re not Latino. If you assimilate to America, you’re not Latino either.

By the way, Marrero reports that Cubans are also questionably “Latino" :

Some directly accuse Cruz and Rubio directly of not being “verdaderos latinos” (true Latinos) for being Cubans and not Mexicans, or White instead of Mestizo. This offends other Latinos, particularly Cubans, who in the past have felt unjustly attacked by the Latin American Left and have been called “worms” [Gusanos]by leftists regardless of their true political ideas or their immigration positions. [VDARE.com note: The term "gusano", apparently first used by Fidel Castro himself, is used by Leftists to refer to anti-Communist Cuban expatriates.]

Gradilla, the Chicano Studies prof (presumably of Mexican ancestry), mentioned above, hastened to say that all Cubans aren’t like that now, but Marrero said that “in the case of Rafael Edward Cruz, the old stereotypes seem to gain new life and new power in US politics.”

The exchange occurred in Storm Lake, Iowa in early January. (Storm Lake has two meatpacking plants, and as a result, this town of 10,000 is 36 percent Latino.)Ofelia Valdez, a 30-year old DACA beneficiary who claims to have been in the U.S. since she was 15 told Cruz she was worried about deportation. The exchange was in English.

As a DACA holder myself, I worried about whoever comes next to the presidency and what’s going to happen to people like us... I think of myself as part of this community and you know, first day of presidency, you decide to deport, you know, people like myself, you know, it’s just very difficult to process.[Dreamer Says She Fears Deportation After Exchange with Ted Cruz, by Suzanne Gamboa, NBC, January 17, 2016]

Well listen, I would note, if you’re a DACA recipient, that means that you were brought here illegally, and violating the laws has consequences. And one of the problems with our broken immigration systems is that it is creating human tragedies... but I can tell you what the law is in every country on earth. If I illegally emigrate to England, or Germany, or France, or China, or Mexico and they catch me, they will deport me. That’s what every country on earth does. And there’s no reason that America’s laws should have less respect than the laws of every other country on earth. We should welcome people who come following the laws but there are consequences for breaking the law. And that is part of what makes America the nation that we are.

Kudos to Ted Cruz upholding the rule of law. Note too he wasn’t rude or unkind, but he answered a difficult question.

Honestly, after that night I had many emotions. That conversation made me go back and feel all that I have lived as an undocumented person during so many years. It is very difficult to hear presidential candidates of this country who speak in this way.

Latinos in the United States may be of Mexican, Cuban, Puerto Rican and other national origins. The activists quoted above are attempting to construct an overarching “Latino” identity, which looks imposing on the macro-level. But most “Latinos” still identify more with their particular national group.

Thus Rodolfo Casparius, [Email him] a writer at La Opinión, complains about Latino disunity and exhorts Latinos to work together:

We continue being Mexicans, Cubans, Salvadorans, Guatemalans, each with his very particular situations and problems, but we have not known how to get together to attack the common problems. Nor do I currently see any leader of the caliber of Henry Cisneros that can unify us to increase our political force.

As I’ve written before, I don’t see it happening either.

In Mexico, pundit Leo Zuckermann [Email him] in his February 4th Juegos de Poder (“Power Games”) column in Excelsior, writes about the U.S. elections in ¿Una mujer Presidenta? It’s mostly about Hillary but he also makes a reference to the Republicans.

Here’s how he describes Trump, Cruz and Rubio:

…. [Rubio] is the one that [Hillary] fears the most in her campaign. It would be easier [for Hillary] to beat Trump or Cruz, two demagogues of the extreme right who will find it difficult to obtain the votes of electoral minorities, especially Latinos. Rubio…is the least crazy of the three. Within the current Republican Right-Wing, [Rubio] is the most centrist and pragmatic. ….. [Rubio] strangely can capture more Latino votes for the Republicans despite his hardline position against the undocumented immigrants.

Note that, even though Zuckermann thinks Rubio is less crazy than Trump or Cruz, he still thinks Rubio has a hardline position on illegal immigration.

After all, from a Mexican perspective, anything less than immediate Open Borders for Mexicans (with full benefits!) is “anti-immigrant.”

The Hillary campaign is running a Spanish-language ad in Nevada. Hillary is portraying herself as a maternal amiga to Hispanics. Even if you don’t understand Spanish, you can still get the feel of it.

You learn who your true friends are.

Hillary Clinton has always been with us in the struggle for a migratory reform that keeps families united.

She fought to provide medical access to 8 million children and her plan as President is to make university education more affordable.

There will always be obstacles, but with a friend like Hillary we will go forward.

So Hillary is in favor of Amnesty (and benefits!)

But “go forward” where?