The Trump-bashing in Mexico continues. Mexico’s elite realizes that Trump is a threat to the system. Good for him!

Just as north of the border, the tired old Hitler analogies continue to be used.

Or all of the above. 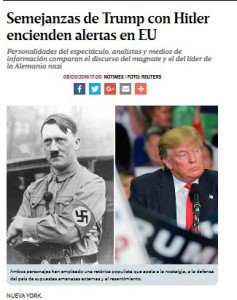 The Notimex article, filed from New York City, and emblazoned with photos of both individuals, starts off thusly:

As time goes by, more entertainment personalities, analysts and information media in the United States are warning of the similarities between the discourse of Donald Trump and the leader of Nazi Germany, Adolph Hitler.

It’s great that Notimex included entertainment personalities. We wouldn’t want to be without their expert testimony!

Notimex says the warnings emanate from both liberals and conservatives, and it even includes a reference to the increasingly-unhinged Glenn Beck, whom I personally heard call Trump the most dangerous man to run for the  presidency of the U.S. in history.

But what do these “experts” say Trump and Hitler have in common? Well, you see, “both persons have employed a populist rhetoric that appeals to nostalgia, the defense of the country and supposed external menaces and resentment.”

Hmm, that sounds just what a Mexican congresswoman is purveying in my next item…. 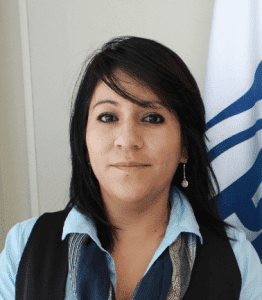 The constant advance of Donald Trump in the race for the presidency of the United States worries us, because his declarations of hate against Mexican migrants are not only a threat to our fellow Mexicans who reside in the U.S., but also an outrage against the diplomatic relations between our countries.

I’d agree with the congresswoman on this. Donald Trump’s candidacy is a threat, not to Mexico or Mexicans, but to the status quo in Washington and Mexico City.

And that’s a good thing.

FOX COMMENTARY ON THE U.S. ELECTION

I refer here not to the Fox Network but to commentary by Vicente Fox, who was president of Mexico 2000-2006. Fox has gotten hysterical about Trump’s candidacy. Plus, it helps keep Fox in the public eye.

In an interview with Adela Micha of Grupo Imagen Multimedia published on February 26th, Fox even had some debate commentary. We wouldn’t want to miss out on Vicente Fox’s analysis would we? Here’s what he said:

In last night’s debate [debate of February 25th) it was seen that the other two tipejos [scoundrels, rascals, despicable persons] that they say are of Mexican origin, with Spanish surnames, are equally atrabancados [imprudent, careless, reckless] on the subject of migration. Therefore, not Rubio, nor Cruz nor Donald.

So who does Vicente Fox endorse? We really need to know!

Although she wasn’t my preference, but I see her centered and well-equipped, Hillary (Clinton), and the truth is that she should be the hope of that great nation.

Thanks, Vicente! We always need to know what you think!

Here’s a story that has been totally ignored by the U.S. English-language media. But it illustrates some troubling aspects of the relationship between Mexico and some alleged American citizens. 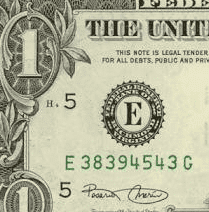 Rosario Marin was born in Mexico and moved to the U.S. (legally) with her family at the age of 14. Years later, from 2001 to 2003, she was appointed by the George II Administration to be Treasurer of the United States. (That office should not be confused with Secretary of the Treasury, the cabinet-level position, but if you have a dollar bill issued in 2003, her signature is on it.)

Rosario Marin was recently back in her birthplace, Mexico City, to receive a special award from the Mexican Senate. The purpose of this award, according to the Mexican media, was to “callar” (shut up) Trump.

As an example of the great contribution that Mexican migrants have made to the United States, the Senate of the Republic presented, in solemn session, the Elvia Carrillo Puerto Award to Rosario Marin, former treasurer of the United States….The presentation of the recognition, said the president of the Senate, Roberto Gil Zuarth, serves to callar (shut up, silence) those who attempt to separate both countries and promote the discourse of hate against the Mexicans. This is an allusion to the Republican pre-candidate for the White House, Donald Trump.

She, Rosario, is the best counter-argument to the discourse of hate that wants to put walls between Mexico and the United States. Rosario Marin is the best proof that the Mexican migrants do not go to harm the society, that Mexican migrants have no other purpose but to contribute to the development of a great nation.

So a Mexican-born U.S. citizen, a former U.S. official in the Bush administration, is presented an award by the Mexican Senate, to silence Donald Trump. As for Rosario Marin, she played right along by publicly calling Trump a “fascist”. From Excelsior:

The full Senate of the Republic presented the Elvia Carrillo Puerto Prize to Rosario Marin, former treasurer of the United States. The recipient (Rosario Marin) called her people to stop Donald Trump, whom she called “despicable”, “fatal”, “fascist”, “Ignorant” and “sinister”, who uses the Republican Party “to lift up his spurious interests”.

She reminded Donald Trump that she was the first Mexican woman to become Treasurer of the United States, thanks to the Republican Party. [She was appointed by George W. In 2001.]

She is the first Mexican-born woman to be Treasurer, but she is now a U.S. citizen. Is that not significant?

Rosario Marin waxed eloquent in her public denunciation of Trump:

“… it is a risk that demands the attention and unity of women and men of good faith of our countries to denounce and detain the ambitions of a despicable subject [Trump], an individual who in his crazed and proud desire to take power, in the purest fascist style, aspires to provoke xenophobic and racist feelings, especially against Mexicans…

So here we have a Mexican-born naturalized citizen, a Republican, and former government official in the Bush Administration, receiving an award from the Senate of the land of her birth, and publicly attacking a presidential candidate in the land of her current citizenship, where she was a public official. [Rosario Marin: a Republican to Put Democrats Off Balance, by George Skelton, LA Times, February 16, 2004]

Vice-President Biden recently was criticized by some for something somewhat similar on his visit to Mexico City.

So how about what Rosario Marin has done?