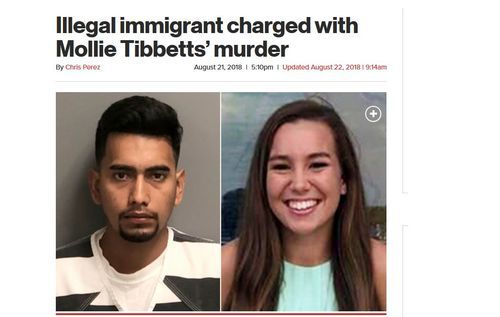 Missing for a Month, Mollie Tibbetts Is Dead, Murdered by an Illegal Alien Mexican

Our borders are so open to the criminal scum of the world that even a small town in Iowa is not safe from them. Mollie certainly thought it wouldn’t be dangerous to take a run near her home, but a foreigner followed her in his car, kidnapped and killed her.

Below, Mexican illegal Cristhian Rivera is under arrest for the murder of college student Mollie Tibbetts. 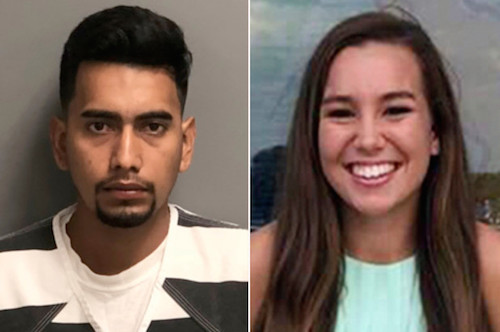 I’ve been followed while on foot by strange men in cars, and it is unnerving — they can run you down if they want.

Every crime committed by an illegal alien is a preventable one; the fact that so many Americans have been killed by foreigners who shouldn’t be here shows how little elites and the political class care about public safety. Now Mollie’s family must join a tragic group of parents and relatives who have lost loved ones to illegal alien crime — like the parents who spoke at Donald Trump’s nominating convention.

“This is an outrage, a preventable crime that should’ve never happened.”

Agnes Gibboney, whose son was killed by an illegal immigrant, comments on the death of Mollie Tibbetts. @foxnewsnight https://t.co/Oz0U9BxZiB pic.twitter.com/aUI23HLmEO

It looks like local police did good investigative work to find the killer. Unfortunately, Iowa does not have the death penalty. Killer Cristhian Rivera claims he “blacked out” at the moment of the actual murder, so the insanity defense is likely. He will probably be portrayed as the victim, as happened to a degree with the killer of Kate Steinle.

Another important question is the employment of Rivera — which curiously is unspecified now — where was he working? If America had universal E-verify to weed out illegal alien workers, their numbers would drop like a rock, since American jobs are the only reason the invaders are here.

An “illegal alien” is in custody for the murder of Iowa college student Mollie Tibbetts, according to police officials.

Cristhian Rivera, 24, was charged Tuesday in Poweshiek County after being brought in without incident by local cops.

Investigators spoke to him at length about what happened on July 18 — when he allegedly abducted Tibbetts — and revealed what he said during an afternoon press conference.

According to officials, Rivera told cops that he saw the young woman running, circled around a few times in his car, and eventually approached her.

He got out an ran up behind Tibbetts and accidentally spooked her — causing the 20-year-old to panic, officials said.

Rivera told cops that he then blacked out, and didn’t come to again until after Tibbetts was already dead — at the intersection in rural Poweshiek County where investigators found her body.

Cops would not say when the young college student was left there.

Rick Rahn, special agent in charge at the Iowa Division of Criminal Investigation, told reporters that federal officials were able to confirm Rivera’s status as an illegal immigrant after he was brought into custody on Monday.

“He’s an illegal alien, been in this area for four to seven years,” Rahn said.

Investigators were able to link Rivera to the missing person case after catching his black Chevy Malibu on surveillance camera the day Tibbetts disappeared. He was allegedly tailing her as she ran.

“He followed her around,” Rahn said. “Circled around a couple times, located her, then began to interface with her.” (Continues)

They say he passed E-Verify.