Unsurprisingly, the Spanish-language media does not like the RAISE Act (and its companion in the House). A recent unsigned piece in La Opinión, the largest Spanish-language newspaper in the U.S., tells us “Trump wants to end the principle which founded this great nation” and features a scowling, finger-pointing Trump [La nueva guerra migratoria de Donald Trump afectará a todos en EEUU—“ Donald Trump’s New Migratory Will Affect Everybody in the United States,” December 15, 2017.]

It claims Trump is about to attack a “new victim.” And who is this victim? “That’s chain migration, which permits relatives of naturalized immigrants to eventually obtain legal residence and later their citizenship in the United States.”

The paper warns Trump is preparing an “intense media campaign to influence public opinion and congress with the single goal of ending the immigration system based on the family.”

I hope the paper is right. It’s certainly a more important goal than the tax bill.

La Opinión gives the game away when it tries to denounce the president’s preferred policy.

Let’s not promote education and employment! That would be unjust or something. Besides, aren’t boosters of Latin American immigration always telling us how economically beneficial Latinos are to the United States and how we can’t live without them?

The government is assembling data to reinforce the argument that the current legal immigration system not only is wrong but that it is dangerous to the security of the United States and for the country’s workers.

This country’s security and its workers are not high priorities for La Opinión.

La Opinión knows what is at stake here. Chain migration is, to put it bluntly, the mechanism by which this country is being transformed demographically. Expect the paper and other Hispanic activists to fight any threat to chain migration to the death. 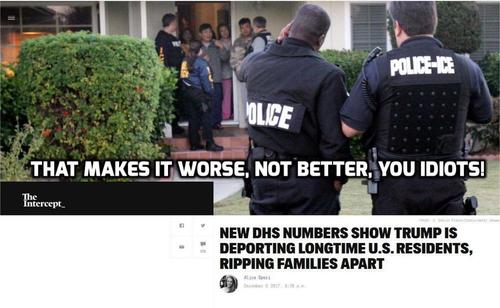 The paper mourns all their time in America was “worth nothing because this Friday… they left the United States from Newark Airport, to Mexico City.”

Why was the time here “worth nothing?” Presumably they made a lot of money and had their children educated by the American taxpayer. Are they not going to thank America for allowing them to live here illegally for almost three decades?

The sob story quotes Oscar Campos’s last words to “friends and family who accompanied them to bid them farewell.” But don’t worry. The couple is leaving behind its three anchor babies—“all American citizens,” as the paper gloats.

Once again, we need to immediately abolish automatic birthright citizenship for children of illegal aliens.

They [the couple] emphasized that “there are many good people, don’t be discouraged and keep fighting.”

Good advice for immigration patriots too .

La Opinión says “the reasons for” the couple’s deportation “have not been specified.” Just a guess—but It could be because they are illegal aliens. Campos entered the U.S. in 1989. VDARE.COM has many readers who weren’t even born then.

NJ.com suggests the Campos couple went through some kind of process with ICE in order to stay. Senator Cory Booker even lobbied on the family’s behalf. But the law is the law and they were finally deported [Despite pleas, couple in U.S. for 30 years deported to Mexico, by Bill Gallo Jr., December 8, 2017]

I can sympathize at a personal level. But they made choices, and finally those choices have caught up with them.

On a national level, illegal immigration has been tolerated for so long that there’s no easy way to put an end to it. But it must be ended—if our country is to survive.

New Book Tells Illegals Reasons They Might Get Deported

Illegal aliens and especially their activist defenders have an entitled attitude. They somehow believe it is an injustice they can be deported. They’ve gotten away with for it so long that this attitude only grows with time.

Hopefully this is changing with President Trump. But it hasn’t changed yet.

Little by little, the government of President Donald Trump seems to be adding conditions to deport thousands of immigrants in the United States, to fulfill his campaign promise and to implement his new rules of immigration ‘by merit.’

[Cualquier inmigrante con alguna de estas condicionantes podría ser deportado —“Any Immigrant in any of these situations can be Deported”) November 22, 2017 ] 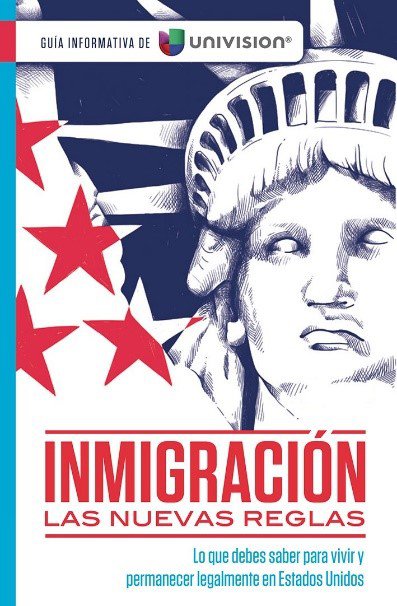 As a public service to the illegal alien community, there is a new book out to help illegals navigate their way through Trump’s America. It is “written by Univisión experts and published by Random House Mondadori…..” The book discusses conditions of deportation and is entitled Inmigración, las nuevas reglas [“Immigration, the New Rules”].

These the things that could lead to deportation—any illegal aliens in these conditions had better beware:

Basically, don’t get in trouble.

But aren’t these people already in violation of the law by being here illegally?

As a matter of fact, the article from The Hill quotes Tom Homan on that score:

The ICE director, Tom Homan, indicated that the simple act of being indocumentado is a reason to be deported.

Exactly! Maybe I just saved someone the book’s purchase price.

Of course, La Opinión believes that no illegal Latin American should be deported, so it closes with this bit of advice:

Activists suggest that any immigrant contact a lawyer or organization in defense of civil liberties if they have any of these conditions or are detained by ICE.

Remember, the process doesn’t end until the illegal immigrant wins.