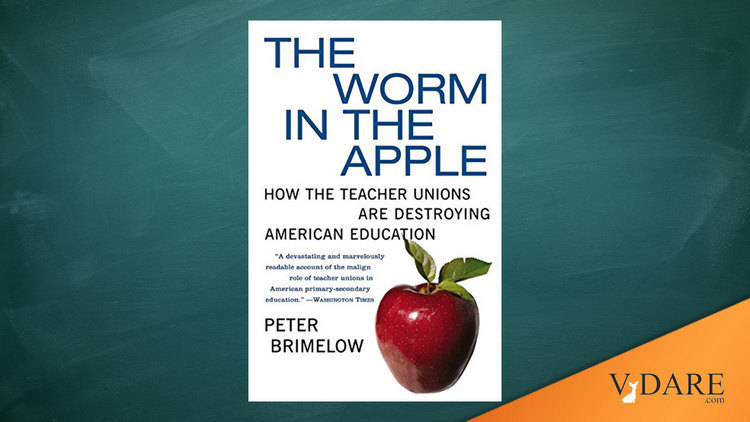 Review Of WORM IN THE APPLE: Why the Teachers Can't Be Trusted

I attended an education conference in Washington the other day, and something unusual happened. It is not easy to notice when the watchdogs don't bark, but this time they surely didn't.

The occasion was a Hoover Institution symposium on the lack of progress since a report very critical of U.S. schooling came out twenty years ago. Recently, Hoover assembled a task force, and now its members were here to tell us their finding: "U.S. Education Still Flunks" There has been no progress, apparently. Maybe even further decline. The leadoff speaker was Rod Paige, the secretary of education.

Cabinet members sometimes give the impression that they regard their boss as Stalin: the man who can end their careers at any moment. Given the war fever in Washington, President Bush is unlikely to be paying much attention to education these days; we can feel confident that, whatever his place in history, "education president" won't be it. Still, when Paige started to talk about the No Child Left Behind Act, he gave the impression that Bush was looking over his shoulder: "Historic in its sweep, historic in its findings, historic in its commitment to children... Never before has this nation, any nation, or any society...regardless of race or family.."

It's never easy to notice when the watchdogs don't bark

Some of us were beginning to doze off when Paige abruptly woke everyone up. He was talking about his own department:

We've had nineteen people arrested, several convicted. Five arrested for stealing, using funds to buy a red Corvette, and billing us. Two million dollars stolen from Impact Aid, $450 million missing! We recovered 95 percent of those problems. We found credit cards all across the organization, with spending limits of up to $300,000. We shut them down completely. We've cut it down to $2,500, for a few people only. And Ernst & Young for the first time said, "This organization deserves a clean audit." We've still got work to do. But we are building a coherent, functioning organization.

Good thing I had the tape recorder running! I checked the department Web site the next day, and there was the secretary's speech. But his backhanded progress report somehow wasn't included. I queried the secretary's personal assistant. How new was this? He forwarded a department press release, dated two weeks earlier. It mentioned: "One million dollars in false overtime had been charged to the department" Also: "A theft ring inside the department used hundreds of thousands of the taxpayers' dollars to buy and then steal all manner of electronic equipment:' Money intended for South Dakota schools was "diverted to buy real estate, a Lincoln Navigator, and a Cadillac Escalade." As to those arrested, "the former department employee and acknowledged ring leader of this group of nineteen people is scheduled to be sentenced on March 28, along with her husband—an employee of the EPA—son, and two others." It went on for paragraphs.

If you read Education Week you may have heard about this. Otherwise I doubt it. Hardly anyone in the general press wrote about it, according to the press secretary. Private sector delinquency gets frontpage coverage. But when thousands of bureaucrats dispose of tens of billions of taxpayers' money each year, some of it into their own pockets, the media watchdogs sleep on. These massive government agencies operate essentially without media scrutiny, and the people who work there know it. Months pass between desultory reports about the department in the Washington Post, for example.

A friend at the Department of Education told me that the problem Paige described arose in the first Clinton administration. Some internal auditing had been terminated because senior officials naively believed that people who work in education can be trusted to "do the right thing" By Clinton's second term the diversion of funds was rampant and the truth was beginning to dawn. Secretary Paige was delivering a progress report on an investigation that has been going on for a few years.

As newsworthiness is currently assessed in Washington, moral turpitude in government agencies is considered a minor thing. The reigning idea is that those who work at the taxpayers' expense are idealistic (unless they work for the Pentagon). In contrast, workers in profit-seeking enterprises are inspired by greed. Press scrutiny of government workers is far more essential, of course, because their revenues are obtained coercively. And failing agencies are rewarded with budget increases. They never, never go out of business. In contrast, the shares of mismanaged private companies decline in value. Eventually they will go out of business. So the problem is self-correcting.

The amount of money spent on education at all levels has now risen to unbelievable heights. It is now a $750-billion industry in the United States. When the U.S. Department of Education was created, in 1980, its budget was $14 billion; today it has grown by a factor of four. In 1980, conservatives called for the department to be shut down. Recently, it was favored with a Ted-Kennedy-sized budget increase. Ronald Reagan called for the department to be abolished when he first ran for president. But when he was elected, his secretary of education, Terrel Bell, did not agree. (More recently it has been reported that Rod Paige did not agree with President Bush's No Child Left Behind proposal and was "out of the loop" when it went through Congress. He had hoped that Bush would take a harder line.)

Eventually Terrel Bell appointed an independent commission to study the problems of U.S. education. It included high-ranking academics, and its report, A Nation at Risk, was well received. This in turn "ended the debate about abolishing the department and guaranteed its political survival" according to Diane Ravitch, a professor at New York University, and a member of the Hoover panel assembled in Washington. In its most quoted comment, A Nation at Risk said that the U.S. education system was "being eroded by a rising tide of mediocrity that threatens our very future as a nation and a people."

That was in 1983. What has happened since? According to Paul E. Peterson, the Henry Lee Shattuck Professor of Government at Harvard and another member of the Hoover group, the overall picture is "unmistakably grim." We have long trailed many other countries in math instruction, he said, and there are no signs of that gap closing. As for reading and writing, there are "multiple signs of a downward trend." Moreover, the declining performance among high schoolers has been accompanied by "a decline in the percentage of students finishing high school. Students are walking away from public schools, choosing other ways of getting an apparent diploma."

I talked to Terry Moe, a professor of political science at Stanford. He is the author of several books on education and school vouchers and an expert on the key role of the teacher unions. The ongoing decline, or at best stagnation in government schooling, has occurred even though "we are spending three times more per child than we spent in 1960" he told me. And that is corrected for inflation.

This is what the education establishment doesn't want to hear: More money yields no improvement in the classroom. Chester Finn, a walking encyclopedia of all things educational, and chairman of Hoover's Koret Task Force, said that more money "hasn't worked, isn't working, and after twenty years how much more experiment with failure do we need?"

An argument one heard was that the Soccer Moms are content with their schools. They rate them B plus, everyone else's C minus. In the same way people think their own congressman is good and all the others are bad. So the parents fear many reforms, lest their own schools lose out in a perceived zero-sum reshuffle.

"Well, the suburban schools are not working as well as people tend to think" Chester Finn said. "The great American middle class is under a bit of an illusion that its schools are just fine. Compare them with student achievement in Germany or Japan or Korea or a wide range of other countries, and we can show that it just isn't true."

Here are some of the main task-force findings: The United States is falling behind many other countries. SAT scores remain well below their 1970 levels. The school year is about seven days shorter than it was. The share of teachers with a master's degree in a subject area (rather than the dismal subject of education) has fallen from 17 percent in 1982 to 5 percent now. Teachers have smaller classes, and their salaries rose from $19,000 a year to $35,000 in 2000. Their fringe benefits have increased rapidly.

This is where the teacher unions come in. In his excellent new book The Worm in the Apple: How the Teacher Unions Are Destroying American Education (HarperCollins), Peter Brimelow points out that the great change in these unions didn't occur until the early 1960s, when they were transformed from professional associations to labor unions with monopoly power. The problem that they pose is still novel enough that "many of today's politicians and pundits reached adulthood before the new reality of the teacher unions had reared its ugly bifocals." The venerable economist Milton Friedman says that Brimelow's book "demonstrates beyond a shadow of a doubt that the teacher unions, through their control of the government education monopoly, are the major source of the gross deficiencies in our government school system."

The unions and their incentives provide the analytical key to understanding both educational decline and the prospects for reform. They explain what has happened (smaller classes mean more teachers), and allow us to predict what will happen (or won't). The unions' interests are straightforward: They want increased wages and fringe benefits for their members and no threats to their jobs. They are not interested in education, although they pretend to be. I see that a recent issue of Education Week has an article by the president of the United Federation of Teachers in New York with the headline: "Writing a Curriculum—It's Union Work."

The political power of the unions allows them to block "almost everything that they don't want," Terry Moe told the conference. "And that's going to be the reality for the foreseeable future." The main reforms the Hoover panel likes are accountability and school choice, but the unions will bitterly oppose both. Accountability puts a spotlight on the performance of both schools and teachers. Bad ones can be fired, good ones rewarded. School choice will allow parents to remove their kids from lousy schools. "When they leave, kids and money flow out of unionized schools," Moe said. "They will have fewer members, fewer resources, and less political power."

For these reasons, the interests of teacher unions are for the most part directly opposed to good schooling. Working with the Democrats, they will be able to block needed reforms, probably for years. If so, however, the gap between the suburban schools and those in the inner cities will continue to widen. Eventually, it will become plain for all to see that government education is a civil rights issue—as several people at the conference pointed out. At the moment, liberals don't care about this because they value the political support of the teacher unions more than they care about the literacy of minorities. But one day the great middle class will figure it out and at that point the Teacher Trust will be in trouble.