Barack Obama’s strategy on mass immigration can best be summarized as “Damn the Constitution, full speed ahead!” Our already overloaded America may have to accept as many as 5.5 million additional illegals by executive fiat. What’s remarkable is that this act of almost dictatorial arrogance directly contradicts what Barack Obama himself has said in the past about limits to his authority.

For months, President Barack Obama said there were limits to his power to protect people living illegally in the U.S. from deportation. Now, he is considering broad action to scale back deportations that could include work permits for millions of people, according to lawmakers and immigration advocates who have consulted with the White House.

The shift in White House thinking came after House Republicans said they wouldn't take up immigration legislation, which Mr. Obama and advocates for immigrants had hoped would create a path to citizenship for many in the U.S. illegally.

Mr. Obama already has offered work permits and safe harbor from deportation to so-called Dreamers—about 500,000 people brought to the U.S. illegally as children. The new action could expand those protections to their parents or to other sets of illegal immigrants.”

On the right is WSJ’s chart of the number of children with at least one parent here in the US illegally—that’s a lot of potential “unaccompanied minors.” 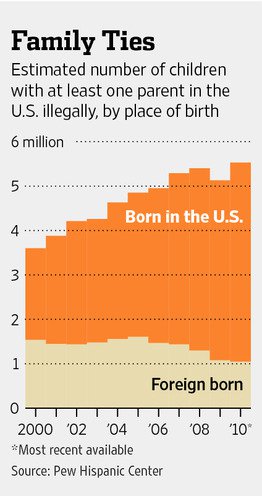 The results would be catastrophic—lower wages, lower quality of living, and a lower levels of education, health care, and other basic services for the American people. However, businesses continue to demand cheap labor, ethnic lobbies want more recruits, and religious groups want to showily display their morality—and get millions of taxpayer dollars to administer welfare programs.

Unfortunately, this is a classic case of privatizing benefits while dumping costs on the public. The vast majority of illegals have little education or skills and will be an economic burden. The American people as a whole will pay the costs, while specific interests reap the benefits.

While the Catholic Church has a financial motivation for its open borders lobbying, there’s also a public relations benefit. From the Pope on down, the Church hierarchy is lobbying for “unaccompanied kids” to receive amnesty and benefits. They may be hoping to fill the empty pews abandoned by the Irish, Italians, and other European ethnic groups that are now having smaller families.

But the real reason may be more prosaic. While the Church showily displays its morality (and quietly counts the money), the American taxpayer is the one actually expected to make the sacrifice. It costs the Pope nothing to speak in favor of amnesty, but it may cost Americans their Republic.

The result is an alliance of convenience between the Vicar of Christ and American progressives. Take this email from FaithfulAmerica.Org, a Religious Leftorganization:

The situation at the border is heartbreaking: tens of thousands of young children, fleeing horrific violence in their native countries, are being crammed into overcrowded Border Patrol jails and held for long periods with no access to family or to legal representation.

And our nation's response? Congress wants to take away children's right to a fair hearing. President Obama has asked for funds to deport the kids back to danger. Protesters have blocked and screamed epithets at buses of children.

At a moment like this, it worth remembering that Jesus fled King Herod's violence in his home country as a child — without documentation. Christians cannot sit idly by while these innocents are sent back to be killed or forcefully recruited into violent street gangs.

Pope Francis has called the situation a "humanitarian emergency" requiring that these children be "welcomed and protected." We agree — and we think it's time to show our leaders just how many Christians are outraged at this profound lack of basic human decency.

"Everything you need to know about the child and family migrant crisis," Vox, July 9, 2014

Jesus was an undocumented child refugee? I seem to recall the very first part of the Gospels being about Christ getting “documented” in a census, but never mind.

Of course no one is opposed to these children getting a fair hearing (although many of them are not children.) But this is simply misleading propaganda that is trying to guilt Americans into doing something that will hurt their interests while benefiting the Vatican, the Religious Left, and the Obama Administration. What President Obama is proposing is simply the unilateral abolition of immigration law enforcement—which makes impeachment seem a lot more reasonable.

This talk of a mass executive amnesty should be regarded as a trial balloon. If there is opposition, he may not go through with it—after all, an election is coming up and millions of Americans are out of work. But that that will only happen if Americans make their voices heard—and don’t allow the Religious Left and the Obama Administration to hand away our country by fiat.