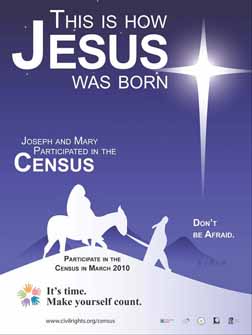 While some Hispanics support a boycott of the upcoming Census count, others want every illegal adult, teen and anchor baby toted up for the future billions of dollars in social services those numbers will attract from the spendo-goverrnment.

As it happens, Mexicans in particular are fixated in December on the image of Mary and Joseph searching unsuccessfully for a place to spend the night. They think that they, as illegal aliens, are similar to the holy family, believing that the inconvenience of full-up hotels is somehow like the semi-unwelcome they receive in America. It's another Mexican delusion, because Mary and Joseph were where they were supposed to be, unlike millions of Mexes.

Anyway, the image of the holy family has been further turned into another propaganda ploy because of an odd twist of illegal Mexican culture.

A push to spread the gospel about the 2010 Census this Christmas is stoking controversy with a campaign that links the government count to events surrounding the birth of Jesus.

The National Association of Latino Elected Officials is leading the distribution to churches and clergy of thousands of posters that depict the arrival of Joseph and a pregnant Mary in Bethlehem more than 2,000 years ago. As chronicled in the Gospel of Luke, Joseph returned to be counted in a Roman census, but he and Mary found no room at an inn, and Jesus was born in a manger.

"This is how Jesus was born," the poster states. "Joseph and Mary participated in the Census."

Most of the posters are in Spanish and target Latino evangelicals, says Jose Cruz, senior director of civic engagement at the Latino association, which launched its Ya Es Hora (It's Time) campaign in 2006 to promote voter registration among Latinos.

It is promoting the Census, used to help allocate $400 billion a year in federal dollars, redraw state and local political districts and determine the number of seats each state gets in Congress.

Interestingly, at least one Hispanic thinks the campaign is off the reservation.

The Rev. Miguel Rivera, chairman of the National Coalition of Latino Clergy and Christian Leaders, says invoking the name of Jesus to promote the 2010 Census is "blasphemous" and "violates the concept of separation of church and state." Using the name of Jesus for "a political and secular intention, it is definitely an assault against our Christian faith," Rivera says.

Despite the objections of one clergyman, it appears the campaign will go forward since money still comes first for immigrants, aliens and their supportive infrastructure.