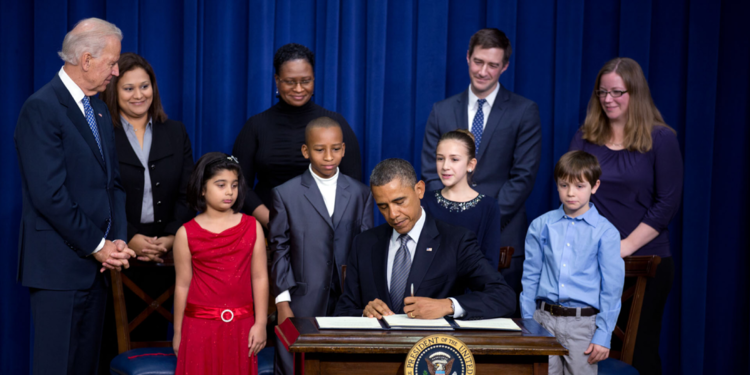 Prop-a-palooza: The Use and Abuse of Kiddie Human Shields

The president of the United States will release a binder full of new gun-control executive orders on Wednesday. Instead of standing alone, bearing full responsibility for the imperial actions he is about to take, President Obama will surround himself with an audience of kids who wrote to him after the Newtown, Conn., school massacre. This is the most cynical in Beltway theatrical staging—a feckless attempt to invoke "For the Children" immunity by hiding behind them.

What has happened to the deliberative process in this country? Public debate in Washington has deteriorated into Sesame Street sing-alongs. We are already inundated with logical fallacies: argumentum ad populum (it's popular, therefore it's true); argumentum ad nauseam (if you repeat it often enough, it'll become truth); argumentum ad hominem (sabotage the person, sabotage the truth); and argumentum ad verecundiam (if my favorite authority says it's true, it's true).

To that list we can now add "argumentum ad filium": If politicians appeal to the children, it's unassailably good and true. The Obama White House has shamelessly employed this kiddie human shield strategy at every turn to blunt substantive criticism and dissent.

During the legislative battle that rammed the federal health care takeover through Capitol Hill and down our throats, President Obama and the Democrats piled up youth props around them like bunker sandbags. Nancy Pelosi wore babies like Wonder Woman bracelets, one on each arm, to deflect troublesome questions about costs and constitutional concerns.

Obamacare stage managers paraded 11-year-old Marcelas Owens of Washington State in front of the cameras to make the case for the half-trillion-dollar tax hike plan. The boy's "qualifications"? Owens' mother, Tiffany, had died of pulmonary hypertension at the age of 27. A single mother of three, she lost her job as a fast-food manager and lost her insurance. She received emergency care and treatment throughout her illness, but died in 2007.

As I noted at the time, Washington State already offered a plethora of existing government assistance programs to laid-off and unemployed workers like Marcelas' mom. For some reason, unexplained by the family or its zealous exploiters, she didn't bother to enroll. Moreover, she died nine months after she reportedly lost her health insurance. By the time she lost her coverage through her employer, she was apparently already in dire health straits. It's not clear that additional doctor visits in the subsequent months would have prevented her death. Nor did Obamacare do anything to address very real flaws with our employer-sponsored health care system.

Young Marcelas admitted he didn't understand health insurance reform and didn't "think it's anyone's fault" that his mom died. No matter. Big government-by-anecdote doesn't need the anecdotes to be true or the solutions to do anything effective to solve our problems.

The intellectual infantilization of politics and public policy is nothing new, of course. The Clintons engaged in one of the most notorious examples of poster child abuse involving an ailing 7-year-old girl named Jennifer Bush. Her mother, Kathleen, wrote to the White House about the agonizing decision to "choose between purchasing groceries for the week to feed your family or buying needed medications for your chronically ill child." Her gall bladder, appendix and fragments of her intestines had been removed in a desperate attempt to diagnose her mystery sickness.

Coached by her overbearing mother, Jennifer gave the Clintons a lucky silver dollar "to bring you good luck so everyone can have good insurance." She dutifully told the press: "I pray every night that I can get better—and that everyone can have insurance." Hillary trotted the family all over Capitol Hill for photo ops and press conferences on behalf of her health insurance mandate proposals.

Two hundred hospital visits, $2 million in medical bills later and two years after Hillary propped her up, doctors discovered that the only thing wrong with little Jennifer was that her mother had been starving and exploiting her while splurging on trips, motorcycles and home remodeling. Mrs. Bush was sentenced to five years in prison on two counts of aggravated child abuse and welfare fraud.

From health care to gun control, the left has perfected this fallacious art of prop-a-palooza—the well-being of the children and national discourse be damned. Political vultures in Washington refuse to do the one thing that might actually benefit the children they recklessly use and abuse as fodder: Grow up.