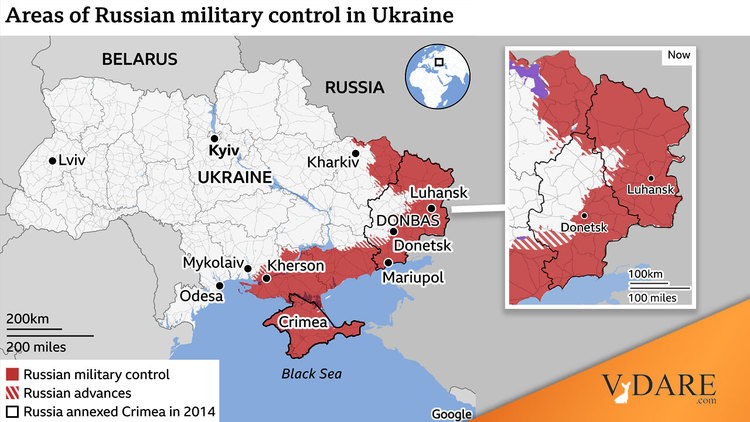 Patrick J. Buchanan: US and Ukraine, Goals in Conflict

Among the nations aiding Ukraine in its resistance to the Russian invasion, America has been foremost. Yet the war interests of our two nations are not identical.

To the U.S., the imperative is that the war be contained, not expanded, and that we not be drawn into a wider war with Russia.

For the independence, territorial integrity and democratic rule of Ukraine, while championed by the U.S., are not vital U.S. interests. None of them justifies a war with Russia that could imperil the security and, if it escalated to nuclear weapons, the very survival of our country.

That America is not "all in" in Ukraine is obvious. Before Feb. 24, the U.S. never brought Ukraine into NATO, never gave it an "Article 5" war guarantee, never agreed to fight alongside it if attacked.

From the first February days of this war, we ruled out U.S. "boots on the ground" or U.S. participation in a "no-fly zone," which would require U.S. pilots to shoot down Russian planes.

These decisions and declarations about what we would not do testified to the limits of the U.S. commitment to Ukraine, as well as to our reluctance to take serious risks to ourselves on Kyiv's behalf.

President Volodymyr Zelenskyy's goal, however, the defeat of the Russian invaders and their expulsion from Ukraine, would require greater support from the U.S. and NATO than he is receiving or is likely to receive.

The U.S. and NATO are willing to supply Ukraine with the weapons to defend themselves and defeat the Russians in battle, but neither NATO nor the U.S. is prepared to fight the Ukrainians' war for them.

When it comes to the fighting and dying, this is their war, not ours.

To shame NATO and the U.S. more fully and openly into his war, Zelenskyy is accusing reluctant Western nations of being appeasers cut from the same bolt of cloth as Neville Chamberlain at Munich.

What is Zelenskyy saying?

Henry Kissinger has said that, in any negotiated settlement, Ukraine will likely have to cede some territory to Russia. Ideally, said Kissinger, "the dividing line should be a return to the status quo" before the 2022 invasion. Russia has held Crimea and parts of Luhansk and Donetsk since 2014.

"Pursuing the war beyond that point would not be about the freedom of Ukraine," said Kissinger, "but a new war against Russia itself."

A livid Zelenskyy replied: "It seems that Mr. Kissinger's calendar is not 2022, but 1938 ... Nobody heard from him then that it was necessary to adapt to the Nazis instead of fleeing them or fighting them."

These cracks in the coalition backing Ukraine are certain to become more pronounced, as Russia appears to be consolidating control of the Donbas, which Putin has set as his principal goal.

Italy, France and Germany are all in contact with Putin. All are pressing for negotiations. None has insisted on what Zelenskyy has at times demanded: Russia's surrender of Ukrainian territory it has held since 2014.

East European nations, familiar with Russian rule, echo Zelenskyy in calling for the defeat, humiliation and expulsion of Russia from Ukraine.

When and if a ceasefire comes and negotiations begin, there seems certain to be a fracturing of the coalition backing Ukraine.

For while Russia was defeated in its offensives to capture Kyiv, Kharkiv and Odessa, Moscow has succeeded in capturing Mariupol, the Sea of Azov and the "land bridge" it sought from Russia to Crimea—and appears to be moving toward dominance of the entire Donbas.

Ukraine is also blockaded by Russian warships from exporting its wheat and corn, upon which a number of developing nations depend to feed their populations and avert malnutrition and even famine.

And with Russia making slow but steady gains in the Donbas, Putin does not appear to be holding a weak hand in any negotiations.

With the Ukrainians and Russians exchanging artillery fire in the Donbas, Zelenskyy asked the U.S. for its High Mobility Artillery Rocket Systems, known as HIMARS.

With strike capabilities of almost 50 miles, this could put Russia itself in range. But U.S. officials say they have assurances from Ukrainian leaders that HIMARS will not be used against Russian territory.

The Kremlin has warned that any nation sending advanced weapons to Ukraine will face harsh repercussions. Russian Foreign Minister Sergei Lavrov has charged the West with declaring "total war" on Russia.

What this suggests is that the war is now generating greater risks and dangers for the U.S. than any additional rewards we might realize from "weakening" Russia with further fighting.

It may be time to tell Zelenskyy not only what we will and will not provide but what we believe are the acceptable terms for a truce.