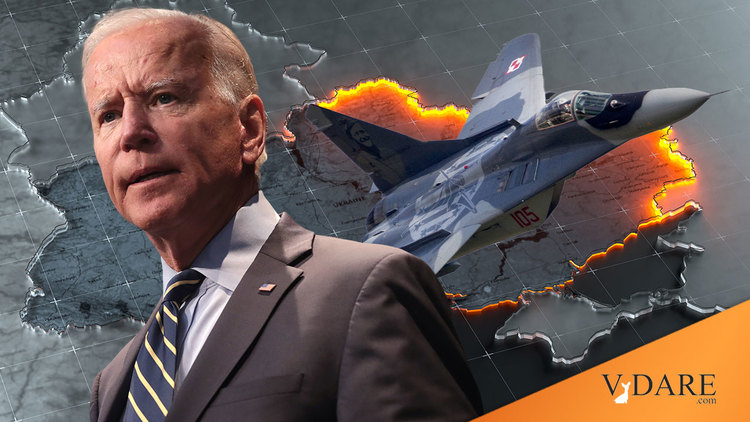 When several NATO nations revealed that they had dozens of Russian-made MiG-29s, the idea arose to fly them to Ukraine and turn them over to Ukrainian pilots familiar with the MiGs.

America would provide F-16s to replace the MiGs.

Poland had an even better idea. Warsaw would fly its 27 MiG fighter jets to the U.S. Ramstein Air Force Base in Germany. The planes would be turned over to the Americans there, repainted and flown to Ukraine.

How to get the MiGs to Ukraine's pilots would be left to the Americans.

Now, as Russian President Vladimir Putin has said that a NATO "no-fly zone" over Ukraine would be an act of war, and NATO intervention could escalate to nuclear war, Warsaw's proposal raised instant American alarms.

The Poles seemed, in the old cliche, to be putting the monkey on our back, having the Americans take the primary risk of defying a specific warning of Putin.

"The prospect of fighter jets 'at the disposal of the Government of the United States of America' departing from a U.S./NATO base in Germany to fly into airspace that is contested with Russia over Ukraine raises serious concerns for the entire NATO alliance."

According to the Washington Post, CIA Director William Burns was at the same time warning the House intelligence committee that Putin's nuclear saber-rattling is of concern, because of Moscow's military doctrine of "escalate to de-escalate" during a regional conflict.

Russia, said Burns, will use tactical nuclear strikes "in extremis" if its forces fail to pacify Ukraine and the U.S. and NATO join the war.

Yet, the Poles' MiG plan, now dead, is revealing for what it says about us.

First, while we support Kyiv in its just war, there are limits to that support. We are not going to risk war with Russia for the independence or territorial integrity, or even the continued existence, of Ukraine.

Second, as we are unwilling to send MiGs to Ukraine to stop the Russian bombing, lest that involve us in a war with Russia, what is there of sufficient value to us in Eastern Europe that we would actually declare war on Russia, a war that could horribly damage or destroy us both?

When the Russians hit a maternity hospital in Mariupol, Ukrainian President Volodymyr Zelensky castigated the U.S. and NATO:

"How much longer will the world be an accomplice ignoring terror? Close the sky right now!"

"Stop the killings!" Zelensky thundered: "You have power, but you seem to be losing humanity."

Zelensky's message to the U.S. and NATO, almost daily now, is: "Don't be cowards. Man up. Do your duty. Close the skies over Ukraine, or send us the planes to do it ourselves."

The U.S.-NATO reply: "We're with you up to a point. But we are not risking our own security and survival, in what is not our war, for yours."

Putin's ambition, his goal, his dream, appear transparent—to bring home to the bosom of Mother Russia the diaspora Russians left behind in the lost 14 republics when the USSR splintered and came apart.

Those housing significant Russian minorities are Ukraine, Belarus, Kazakhstan and the Baltic republics of Latvia and Estonia.

Query: Would we really go to war with Russia if Russia invaded our NATO ally Estonia to bring home Russian peoples left behind at the end of the Cold War?

If Russia seeks to create a land corridor through Lithuania and Poland to its separated province of Kaliningrad on the Baltic, would we declare war on a nuclear-armed Russia to prevent it?

The Biden administration, with Secretary of State Antony Blinken in the lead, has said again and again these last two weeks that the U.S. will defend "every inch" of NATO territory.

Will we? What are we really willing to die for, and what should we be willing to fight for? For that means putting at risk the lives of millions of our people and the ruin of our country.

America's media are full of reports of the new "unity" in NATO.

But one of the matters about which the Allies seem to be most united is that the Russia-Ukraine war is not ours to fight and we should prevent its spread to any of the 30 NATO nations.

On national media, one also hears enthusiasm for bringing Finland and Sweden into NATO.

But Finland is the size of Germany and has an 833-mile border with Russia, which would be NATO's largest. Is it really credible that the U.S. would declare war or go to war with Russia to secure Finland's border?