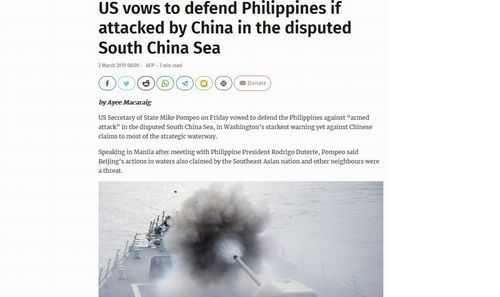 As President Trump flew home from his Hanoi summit with Kim Jong Un, Mike Pompeo peeled off and flew to Manila. And there the Secretary of State made a startling declaration.

Any armed attack by China on a Philippine ship or plane in the South China Sea, he told the Philippine government, will be treated as an attack on an American ship or plane, bringing a U.S. military response.

Article 4 requires the U.S. and the Philippines to come to the defense of the other if one is attacked. The treaty dates back to August 1951. There are Americans on Social Security who were not born when this Cold War treaty was signed.

Why would we make such a commitment? Why take such a risk?

Is Trump aware of what Pompeo's promise could entail?

For years, Beijing has claimed as national territory virtually the entire South China Sea. Vietnam, Malaysia, Singapore, Taiwan and the Philippines all reject China's claims to the Paracel and Spratly Islands within that sea. But Beijing has occupied and expanded half a dozen islets; landed planes and troops; and fortified them as military and naval bases.

Beijing is not going to give them up, and Manila is too weak to take them back. A report from the Center for Strategic and International Studies says a Philippine attempt to build on a disputed islet in the Spratly chain brought a flotilla of nearly 100 Chinese ships to halt Philippine construction.

Why did Pompeo issue this war guarantee?

Because Duterte and members of his Cabinet are unsure the U.S. would come to the defense of the Philippines in such a clash, and they believe their best course may be to appease Beijing, the rising power in Asia and the western Pacific.

Since the end of the Cold War, when Manila ordered us to vacate the Subic Bay Naval Base—only to invite us back when Manila grew nervous about her neighbors—and we were forced to abandon the Clark Air Base, the U.S. has not faced the fundamental question here.

Do we have a vital interest, justifying a war with China, in defending Manila's claim to the Spratly Islands that China also claims, holds and defends as sovereign territory?

If so, how do we plan to get the Chinese off these islands, short of a naval and air war that could escalate? Is the Philippines capable of holding these islands if we help to retake them? Or would Manila rely on U.S. naval and air power in perpetuity to keep them?

Could America sustain such a commitment? More important, why should we? Has the White House thought through the implications of what the Pompeo threat may bring?

If the Chinese politely inform President Duterte that any attempt to take a Chinese-claimed island by force will be met by superior force, what do we do? Tell Duterte it is still his call, even if it means our war?

Is it wise for a great power to cede to a weak ally the ability to drag it into a great war? Ask the late Kaiser Wilhelm II.

When a Chinese fighter crashed into a U.S. reconnaissance plane over the South China Sea in 2001, then-President George W. Bush and Secretary of State Colin Powell apologized for the death of the Chinese pilot—to retrieve the crew China had interned on Hainan Island.

We were unprepared to confront China over an act of aggression over international waters. Yet we are now prepared to fight China over who owns and occupies Mischief Reef or Scarborough Shoal?

In Monday's Wall Street Journal article "The U.S. Is Ceding the Pacific to China," writer Mark Helprin says America must "alter the correlation of military forces in the Western Pacific ... so that it no longer moves rapidly and inevitably in China's favor."

He urges a massive buildup of U.S. ships, planes, missiles, troops and Marines all across the Asia-Pacific theater. And if we do not?

"Frankly, if we do not, the Pacific Coast of the United States will eventually look out upon a Chinese lake," says Helprin.

Today, the U.S., $22 trillion in debt, has treaty commitments dating to the early Cold War to defend Japan, South Korea, the Philippines and Australia, all thousands of miles of ocean away from the USA.

If Trump cannot cut back these war guarantees, who will?