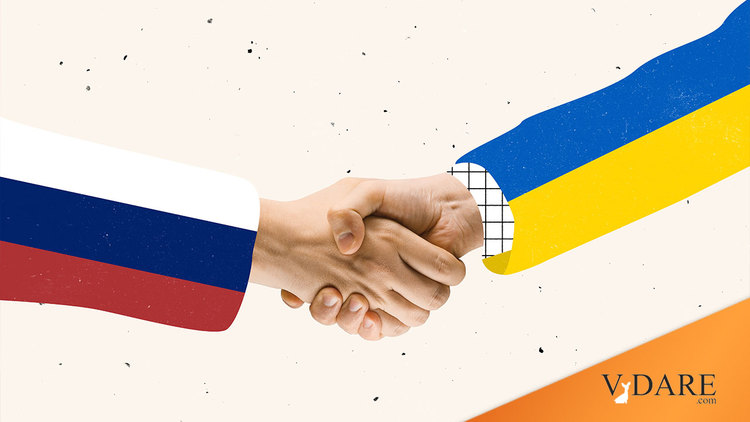 Patrick J. Buchanan: Is There A Peace Deal Putin And Zelensky Can Accept?

In an interview with Reuters, Dmitry Peskov, Russian President Vladimir Putin's spokesman for decades, made a startling offer. Moscow could end the Ukraine war immediately, said Peskov, if four conditions were met.

Ukraine should cease all military action, recognize Crimea as part of Russia, accept the independence of the Luhansk and Donetsk separatist enclaves, and enact a constitutional commitment to "neutrality," which would prevent Ukraine from ever joining NATO.

Were this to be done, said Peskov, the war "will stop in a moment."

As this would restore the situation in Ukraine to the "status quo ante" that existed before Putin ordered the invasion, Peskov's offer seemed not to be believable.

Yet, according to the New York Times, Ukraine's President Volodymyr Zelensky "seemed surprisingly open to the idea."

Zelensky "said he had 'cooled down' on joining NATO, saying it was clear the western alliance 'is not prepared to accept Ukraine.'"

As for Luhansk, Donetsk and Crimea, said Zelensky, "We can discuss and find a compromise on how these territories will live on."

Monday, Ukraine and Russia held a fourth session of peace talks, and expressions of optimism were heard from both sides.

Ukrainian negotiator Mykhailo Podolyak volunteered that Russia is beginning to talk constructively. "I think that we will achieve some results literally in a matter of days."

Yet, Russia's strategic goals, manifest in its unfolding military action, seem to go far beyond the moderate demands of Peskov.

Three weeks into this war, what do Russia's goals appear to be?

First, besiege and bring down the Kyiv government of Zelensky and replace it with a Russian client regime.

Second, divide Ukraine along the lines of the Dnieper River, which bisects the country north to south, and create an East Ukraine as a pro-Russian state.

Third, seize and occupy the entire coast of the Sea of Azov, turn it into a Russian lake, and capture all of the Ukrainian Black Sea coast from the Donbas to Mariupol, Crimea, Kherson, Odessa and Transnistria, the last a slice of seceded Moldovan land Moscow now controls.

This would leave a landlocked rump state of west Ukraine, which would be a buffer between NATO nations Romania, Hungary, Slovakia and Poland—and Russia-backed East Ukraine.

The Wall Street Journal said Monday that Russia's realization of these goals would be tantamount to victory in Putin's war:

"A Ukraine divided in two, with Russia in control of the east, and a rump, Western Ukraine cut off from the coast might look like a victory to Mr. Putin—especially if sanctions are removed in some cease-fire agreement."

With this kind of peace in hand, Putin could then warn the NATO nations that if they attacked East Ukraine directly, or indirectly by arming insurgents, they would face "consequences you have never seen."

As no NATO nation risked war to save Georgia from Russia in 2008, or to save Ukraine from the Crimean and Donbas amputations of 2014, it is not likely NATO would risk war with Russia, and a potential third world war, if Russia declared a truce once it got full control of eastern Ukraine.

Where would that leave the West?

The Americans and British would likely treat Putin as a pariah and never meet with him again. But would President Emmanuel Macron of France and Chancellor Olaf Scholz of Germany cut off all communication with Russia, when they have been making daily phone calls to Putin and regular visits to Moscow, even as Putin's war of aggression was raging?

If Russia and Ukraine reached a ceasefire and a truce, would the EU and NATO nations of Europe not swiftly stand down themselves, rather than keep the Ukrainian resistance fighting?

If Kyiv falls to a Russian strategy of encirclement and strangulation, capitulation and conquest, how long would it be before EU nations seek an end to Russia's isolation and a new era of detente?

Or would the continued existence of a regime headed by Putin mean permanent hostility?

Three years after Nikita Khrushchev sent Soviet tanks into Budapest to crush the Hungarian Revolution of 1956, the Soviet premier was riding up Pennsylvania Avenue in an open convertible with Dwight Eisenhower to spend the night at Blair House before a 12-day tour as the guest of the president of the United States.

As of now, the winner of this Russia-Ukraine war appears to be China.

Given the severity of U.S. sanctions and the ostracism of Russia from the West, China is the only partner nation and economy to which Moscow can turn to recoup its losses.

If this war continues to unfold in a manner that is slow, painful and ugly, China and Russia are likely to establish far better relations with each other than either has with the United States.

But how is China, which is engaged in cultural genocide against its Uyghur minority of 10 million, a racial and ethnic persecution featuring reeducation camps, rapes, forced abortions and sterilizations, a morally superior regime to Putin's?