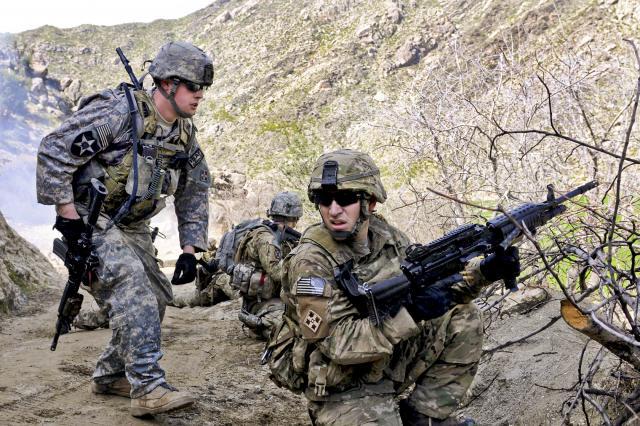 Patrick J. Buchanan: America Still Policing The World—When, If Ever, Can We Lay This Burden Down?

Friday, President Donald Trump met in New Jersey with his national security advisers and envoy Zalmay Khalilzad, who is negotiating with the Taliban to bring about peace, and a U.S. withdrawal from America's longest war.

U.S. troops have been fighting in Afghanistan since 2001, in a war that has cost 2,400 American lives.

Following the meeting, Trump tweeted, "Many on the opposite sides of this 19 year war, and us, are looking to make a deal—if possible!"

Some, however, want no deal; they are fighting for absolute power.

Saturday, a wedding in Kabul with a thousand guests was hit by a suicide bomber who, igniting his vest, massacred 63 people and wounded 200 in one of the greatest atrocities of the war. ISIS claimed responsibility.

Monday, 10 bombs exploded in restaurants and public squares in the eastern city of Jalalabad, wounding 66.

Trump is pressing Khalilzad to negotiate drawdowns of U.S. troop levels from the present 14,000, and to bring about a near-term end to U.S. involvement in a war that began after we overthrew the old Taliban regime for giving sanctuary to Osama bin Laden.

Is it too soon to ask: What have we gained from our longest war? Was all the blood and treasure invested worth it? And what does the future hold?

The Taliban control more of the country than they have at any time since being overthrown in 2001. And time now seems to be on their side.

Why have they persevered, and prevailed in parts of the country?

Motivated by a fanatic faith, tribalism and nationalism, they have shown a willingness to die for a cause that seems more compelling to them than what the U.S.-backed Afghan government has on offer.

They also have the guerrillas' advantage of being able to attack at times and places of their own choosing, without the government's burden of having to defend towns and cities.

Will these Taliban, who have lost many battles but not the war, retire from the field and abide by democratic elections once the Americans go home? Why should they?

The probability: When the Americans depart, the war breaks out anew, and the Taliban ultimately prevail.

And Afghanistan is but one of the clashes and conflicts in which America is engaged.

Severe U.S. sanctions on Venezuela have failed to bring down the Nicholas Maduro regime in Caracas but have contributed to the immiseration of that people, 10% of whom have left the country. Trump now says he is considering a quarantine or blockade to force Maduro out.

Eight years after we helped to overthrow Col. Moammar Gadhafi, Libya is still mired in civil war, with its capital, Tripoli, under siege.

Yemen, among the world's humanitarian disasters, has seen the UAE break with its Saudi interventionist allies, and secessionists split off southern Yemen from the Houthi-dominated north. Yet, still, Congress has been unable to force the Trump administration to end all support of the Saudi war.

Two thousand U.S. troops remain in Syria. The northern unit is deployed between our Syrian Kurd allies and the Turkish army. In the south, they are positioned to prevent Iran and Iranian-backed militias from creating a secure land bridge from Tehran to Baghdad to Damascus to Beirut.

In our confrontation with Iran, we have few allies.

The Brits released the Iranian tanker they seized at Gibraltar, which had been carrying oil to Syria. But when the Americans sought to prevent its departure, a Gibraltar court ruled against the United States.

Iran presents no clear or present danger to U.S. vital interests, but the Saudis and Israelis see Iran as a mortal enemy, and want the U.S. military to rid them of the menace.

Hong Kong protesters wave American flags and seek U.S. support of their demands for greater autonomy and freedom in their clash with their Beijing-backed authorities. The Taiwanese want us to support them and sell them the weapons to maintain their independence. The Philippines wants us to take their side in the dispute with China over tiny islets in the South China Sea.

Around the world, America is involved in quarrels, clashes and confrontations with almost too many nations to count.

In how many of these are U.S. vital interests imperiled? And in how many are we facing potential wars on behalf of other nations, while they hold our coat and egg us on?