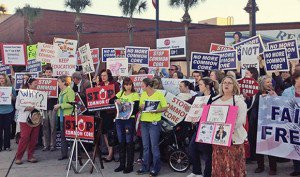 All politics is local. So Republican politicians with national ambitions better pay attention to what grassroots parents are saying and doing about the federal education racket known as Common Core. In bellwether Indiana this week, anti-Common Core activists won a pair of pivotal electoral victories against GOP Gov. Mike Pence.

Pence's attempt to mollify critics by rebranding and repackaging shoddy Common Core standards is fooling no one.

These same Big Business elites backed Pence's ploy to stave off grassroots parental opposition by "withdrawing" from Common Core—and then immediately adopting "new" standards that recycle the same old rotten ones. (See my April 30 column, "Big Government GOP's Common Core Rebrand Hustle.") As Hoosier mom Erin Tuttle put it, Pence's stunt "gave the appearance of voiding the Common Core, while the Indiana Department of Education and the Center for Education and Career Innovation walked it through the backdoor."

The way Pence is going, his 2016 ambitions may soon face the same fate. Pence's hero Ronald Reagan advocated for abolishing the federal Department of Education. Yet, Pence is busy emulating the bureaucratic behemoth. In addition to embracing the expedient "cut and paste" rewrite of Indiana's academic standards overseen by D.C. Common Core operatives, Pence is now pursuing the construction of a statewide student database. It looks and sounds a lot like the federal data-tracking warehouse championed by Common Core advocates.

You'll remember that one of those national information collection schemes is inBloom. The idea was originally funded with Obama stimulus money and grants from the liberal Bill and Melinda Gates Foundation. A division of Rupert Murdoch's News Corp. built the database infrastructure. The nonprofit startup "inBloom Inc." evolved out of this strange alliance to operate the invasive database. The entity planned to compile everything from student and family health-care histories to income information, religious affiliations, voting status, blood types and homework completion.

Once again, grassroots parents revolted. Moms and dads on both sides of the political aisle rose up across the country to reject the latest tech boondoggle peddled by educrat nosybodies. Last fall, voters kicked out three school board members in Jefferson County, Colo., over their support of inBloom. Challengers Julie Williams, John Newkirk and Ken Witt won decisively over their incumbent opponents.

The new board cut ties with inBloom; the superintendent, Gates Foundation-supported Cindy Stevenson, was forced to resign. And a few weeks ago, inBloom announced it was dissolving. It undoubtedly will morph into a newly renamed and repackaged entity, just like the Common Core standards in Indiana.

In their new book, "Conform," on what ails education in America, Glenn Beck and Kyle Olson expose the "open contempt" educrats have for parents. It's a classic Saul Alinsky tactic: Demonize your political targets. True to form, the professional character assassins of the Southern Poverty Law Center are now attacking anti-Common Core activists as "extreme" and "far right."

That's nonsense. The principles that unite parents of all ideologies against Fed Ed are bedrock tenets of our constitutional republic: local control, parental sovereignty, privacy protections and fundamental skepticism about the actual educational benefits of massive government expenditures in the name of "reform." The Davids of the Stop Common Core movement are exercising their freedoms of speech and association to beat back the deep-pocketed Goliaths at their schoolhouse doors.

As always, sunlight is the best disinfectant. The ballot box is the ultimate sanitizer. Ideas have consequences. And Indiana is a harbinger. If the Common Core cheerleaders and rebranders in both parties think their bad ideas won't ever come back to haunt them at the polls, they are in for a very rude awakening.

Post
Shakin’ All Over (Thanks For Nothing, China!) : VDARE.com's First WuFlu Victim Speaks

Post
The English Patients: Stats on 2,249 ICU Admittees in England Are Not Encouraging