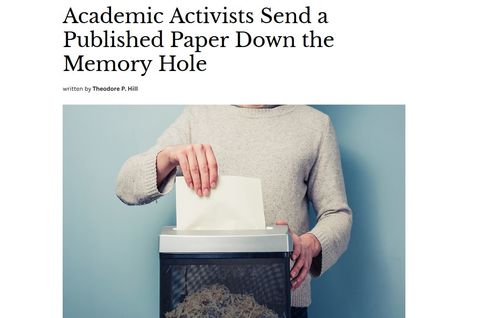 Academic Activists Send a Published Paper Down the Memory Hole

Ted Hill is Professor Emeritus of Mathematics at Georgia Tech, and currently a research scholar in residence at the California Polytechnic State University in San Luis Obispo.

In the highly controversial area of human intelligence, the ‘Greater Male Variability Hypothesis’ (GMVH) asserts that there are more idiots and more geniuses among men than among women. …

Professor Senechal suggested that we might enliven our paper by mentioning Harvard President Larry Summers, who was swiftly defenestrated in 2005 for saying that the GMVH might be a contributing factor to the dearth of women in physics and mathematics departments at top universities. …

… Three days later, however, the paper had vanished. And a few days after that, a completely different paper by different authors appeared at exactly the same page of the same volume (NYJM Volume 23, p 1641+) where mine had once been.

Unaware of any of this, I wrote to Steinberger on November 14, to find out what had happened. I pointed out that if the deletion were permanent, it would leave me in an impossible position. I would not be able to republish anywhere else because I would be unable to sign a copyright form declaring that it had not already been published elsewhere. Steinberger replied later that day. Half his board, he explained unhappily, had told him that unless he pulled the article, they would all resign and “harass the journal” he had founded 25 years earlier “until it died.” Faced with the loss of his own scientific legacy, he had capitulated. “A publication in a dead journal,” he offered, “wouldn’t help you.”

Colleagues I spoke to were appalled. None of them had ever heard of a paper in any field being disappeared after formal publication. Rejected prior to publication? Of course. Retracted? Yes, but only after an investigation, the results of which would then be made public by way of explanation. But simply disappeared? Never. If a formally refereed and published paper can later be erased from the scientific record and replaced by a completely different article, without any discussion with the author or any announcement in the journal, what will this mean for the future of electronic journals?

From my 2016 Taki’s column “From Orwell to Gladwell and Back” about how Wikipedia had memory-holed various notorious scandals involving telenovela actress Alicia Machado because Hillary, with her extraordinary judgment, had chosen Trump “fat-shaming” Machado as her knockout punch in the first Presidential debate:

In the Soviet Union a half decade after 1984 was published, the abrupt fall of Stalin’s successor Beria led to a letter-from-the-editor of the Great Soviet Encyclopedia instructing readers to cut out the admiring article on Beria and replace it with the enclosed expanded articles on the Bering Sea and other alphabetically adjacent topics.