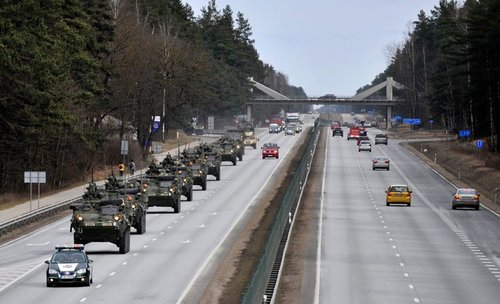 "U.S. Is Poised to Put Heavy Weaponry in East Europe: A Message to Russia," ran the headline in The New York Times.

"In a significant move to deter possible Russian aggression in Europe, the Pentagon is poised to store battle tanks, infantry fighting vehicles and other heavy weapons for as many as 5,000 American troops in several Baltic and Eastern European countries," said the Times. The sources cited were "American and allied officials."

The Pentagon's message received a reply June 16. Russian Gen. Yuri Yakubov called the U.S. move "the most aggressive step by the Pentagon and NATO since the Cold War." When Moscow detects U.S. heavy weapons moving into the Baltic, said Yakubov, Russia will "bolster its forces and resources on the western strategic theater of operations."

The Pentagon and Congress apparently think Vladimir Putin is a bluffer and, faced by U.S. toughness, will back down.

For the House has passed and Sen. John McCain is moving a bill to provide Ukraine with anti-armor weapons, mortars, grenade launchers and ammunition. The administration could not spend more than half of the $300 million budgeted, unless 20 percent is earmarked for offensive weapons.

Congress is voting to give Kiev a green light and the weaponry to attempt a recapture of Donetsk and Luhansk from pro-Russian rebels, who have split off from Ukraine, and Crimea, annexed by Moscow.

If the Pentagon is indeed moving U.S. troops and heavy weapons into Poland and the Baltic States, and is about to provide arms to Kiev to attack the rebels in East Ukraine, we are headed for a U.S.-Russian confrontation unlike any seen since the Cold War.

And reconsider the outcome of those confrontations.

Lest we forget, while it was Khrushchev who backed down in the Cuban missile crisis, President Eisenhower did nothing to halt the crushing of the Hungarian rebels, Kennedy accepted the Berlin Wall, and Lyndon Johnson refused to lift a finger to save the Czechs when their "Prague Spring" was snuffed out by Warsaw Pact tank armies.

Even Reagan's response to the crushing of Solidarity was with words not military action.

None of these presidents was an appeaser, but all respected the geostrategic reality that any military challenge to Moscow on the other side of NATO's Red Line in Germany carried the risk of a calamitous war for causes not justifying such a risk.

Yet we are today risking a collision with Russia in the Baltic States and Ukraine, where no vital U.S. interest has ever existed and where our adversary enjoys military superiority.

As Les Gelb writes in The National Interest, "the West's limp hand" in the Baltic and "Russia's military superiority over NATO on its Western borders," is "painfully evident to all."

"If NATO ups the military ante, Moscow can readily trump it. Moscow has significant advantages in conventional forces — backed by potent tactical nuclear weapons and a stated willingness to use them to sustain advantages or avoid defeat. The last thing NATO wants is to look weak or lose a confrontation."

And NATO losing any such confrontation is the likely outcome of the collision provoked by the Pentagon and John McCain.

For if Kiev moves with U.S. arms against the rebels in the east, and Moscow sends planes, tanks and artillery to annihilate them, Kiev will be routed. And what we do then?

Send carriers into the Black Sea to attack the Russian fleet at Sevastopol, and battle Russian missiles and air attacks?

Before we schedule a NATO confrontation with Russia, we had best look behind us to see who is following America's lead.

According to a new survey by the Pew Global Attitudes Project, fewer than half of the respondents in Britain, France, Germany, Italy and Spain thought NATO should fight if its Baltic allies were attacked by Russia. Germans, by a 58-38 margin, did not think military force should be used by NATO to defend Lithuania, Latvia and Estonia, though that is what Article 5 of the NATO charter requires of Germany.

Americans, by 56-37, favor using force to defend the Baltic States. On military aid to Ukraine, America is divided, 46 percent in favor, 43 percent opposed. However, only 1 in 5 Germans and Italians favor arming Ukraine, and in not a single major NATO nation does the arming of Ukraine enjoy clear majority support.

In Washington, Congressional hawks are primed to show Putin who is truly tough. But in shipping weapons to Ukraine and sending U.S. troops and armor into the Baltic States, they have behind them a divided nation and a NATO alliance that wants no part of this confrontation.

Unlike the Cuban missile crisis, it is Russia that has regional military superiority here, and a leader seemingly prepared to ride the escalator up right alongside us.

Are we sure it will be the Russians who blink this time?