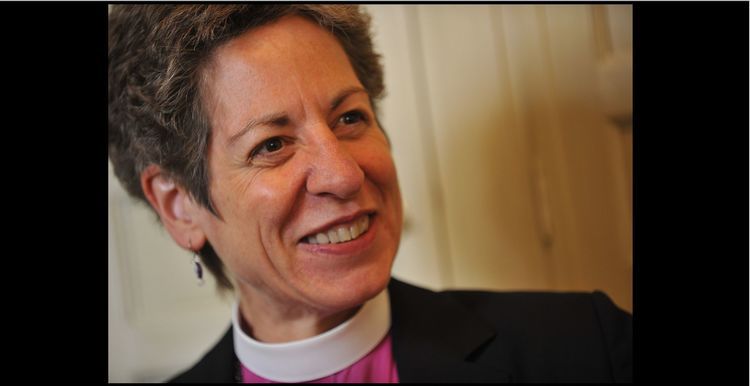 VDARE.COM editor Peter Brimelow came back from his Episcopal church one recent Sunday in a very bad mood and asked me to comment on the factual assertions made by Episcopalian Presiding Bishop Katharine Jefferts Schori in a statement on immigration inserted in that week's Order of Service.

The immigration issue regularly exposes gaps between religious leaders and the laity. Thus many Catholic and mainline Protestant officials oppose strict enforcement of immigration laws. Many support sanctuary policies in their local areas and "comprehensive immigration reform" a.k.a. nationally.

Yet the rank and file are skeptical. Most want the border sealed, immigration laws enforced, and amnesty proposals quashed.

As Brimelow says, immigration is not a matter of faith and morals but of public policy, economics and statistics. Case in point—this assertion by Schori is at best simply wrong, at worst deliberately disingenuous:

"Uncontrolled migration across the U.S. - Mexico border, for instance, actually has decreased by two-thirds over the last decade, and the total number of undocumented immigrants in the United States has declined about 10 percent."

The illegal alien inflow has indeed declined significantly, albeit because of the collapsing the U.S. economy. From March 2007 to March 2009 it averaged 300,000 per year—down nearly two-thirds from the 850,000 per year that came in during the first half of the decade (March 2000 to March 2005). [U.S. Unauthorized Immigration Flows Are Down Sharply Since Mid-Decade, By Jeffrey S. Passel, and D'Vera Cohn,Pew Research Center, September 1, 2010]  Illegals have also returned home, reducing the illegal alien population by about 8% below its 2007 peak.

But Schori insinuates that a decade's worth of illegal border crossings have been reversed by the recent slowing. Not so: the overwhelming majority of illegal immigrants did not leave the country, and hundreds of thousands of new ones entered each year. Since 2000, the illegal alien population has grown nearly five-times as fast as the native-born, outpacing even legal immigration as a source of population growth.

As recently as 1992—when Brimelow published the National Review cover story that was to become his 1995 book Alien Nation: Common Sense About America's Immigration Disaster—only 3.9 million illegals were estimated to be in the country. That's hard to believe.

But why worry if—as Ms. Schori and her ilk believe—they come here to do the work that American citizens don't want to do. She writes:

"…The American economic system depends on labor that is not being provided by citizens. Mexican citizens seek to fill that labor need in order to answer their economic need…."

Schori cites no evidence, but presumably she accepts the argument that the average illegal brings a different set of skills and experience to the workplace than the average native-born American.

Up to a point. A recent CBO study finds, for example, that 55% of Mexican and Central American workers lacked a high school degree in 2009 versus only 6% of natives. Almost half (45%) of workers born in Mexico or Central America are in 3 of 22 occupational groups: Construction and extraction, production, and building and grounds cleaning. Only 13% of native-born Americans work in those areas.

An average 1.035 million native-born dropouts were unemployed last year; their unemployment rate—16.5%—was about significantly above the 12.6% rate of immigrant drop-outs.

And that's the good news. The bad news: the vast majority of native dropouts—over 10 million—were too discouraged to look for work. Labor force participation for them was a measly 37.9%, compared to 61.4% for their foreign-born counterparts.

Bishop Schori, judging by her statement above, would certainly respond with the comfortable, conventional response of the immigration apologist: uneducated native-born Americans simply do not want to do the work done by illegal aliens.

But if this were really the case, there would be occupations manned entirely by immigrants. A CIS analysis of Census Bureau data debunks this. Occupations widely thought to be overwhelmingly immigrant are, in fact, still dominated by the native-born:

In only four of the 465 civilian occupations surveyed did immigrants account for more than 50% of workers. These four employed less than 1% of the U.S. workforce.

Needless to say, Schori's screed showed absolutely no awareness of the fact that immigration is depressing American wages, particularly for the poorest, although this is analytically indisputable.

More anguish for Anglicans: Rob Sanchez' blog tonight about the suffering of the family of murdered Arizona rancher Rob Krentz, showing the Episcopalian hierarchy up to their clerical collars in Treason Lobbying:

"The organization supporting the protest is called Humanitarian Border Solutions — a shadowy group that is supported and partially funded by the Episcopal Church. They are best known for putting water stations in the desert to make the journey easier for illegal aliens that need drinks of fresh water and food. Call it pure speculation on my part, but I doubt that any of the money they raised will be used to help ease the burdens forced on the Krentz family."