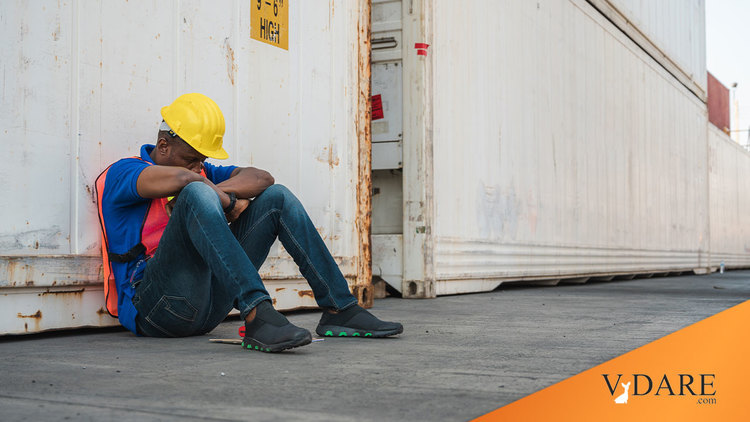 Black Americans overwhelmingly supported Barack Obama in his two presidential elections, but their employment prospects have, if anything, deteriorated during his term of in office. In particular, their position relative to other racial groups has worsened.

Historically, Blacks’ unemployment rates have been multiples of other major racial and ethnic groups. This relationship has not changed one iota during the first five Obama years. In fact, the latest unemployment report (January 2014) shows Black unemployment at 12.1%, or 2.12-times the white rate (5.7 %.) In January 2009 the black/white disparity was 1.79-times.

Of course the White House media machine would rather we all focus on the reduction in unemployment rates from the lofty levels of the early Obama years:

The casual newspaper reader might take this juxtaposition as a sign that Blacks are gaining jobs at a faster pace than Whites or Hispanics. But this assumption ignores two major disconnects between unemployment rates and employment:

Relatively high fertility among U.S.-born Hispanic mothers is one reason why the Hispanic population is growing faster than that of other groups. The other factor: immigration—perhaps more significant because, unlike fertility, it is under the control of public policy and can vary dramatically from year to year. Immigrants, legal and illegal, now make up some 37.4% of the U.S. Hispanic population—so high that we used to use Hispanics employment as a proxy for immigrant displacement of American workers.

(White labor force participation has also declined over this period. This, combined with sluggish white population growth, means fewer whites are working today than at the beginning of the Obama Era—despite a reduction in white unemployment rates over that time. Generally, Obama has been bad news for all Americans.)

Black unemployment rate reduction during the Obama years is disproportionately of the latter variety:

For decades Hispanics have had the highest overall labor force participation rate, mainly because they are younger than other racial groups and are more likely to be immigrants seeking jobs. A recent BLS study sees little likelihood the LFP rankings will change:

The past 12 months offer a classic example of how a horrific labor market can produce a paradoxical decline in unemployment rates. Black labor force participation fell to 60.2% in December 2013, its lowest level in 35 years, before rebounding slightly, to 60.5%, in January. [BLS Report, PDF]

A year earlier, in January 2013, Black labor force participation was a comparatively lofty 61.8%. Had that rate been maintained nearly 400,000 more Blacks would be in today’s labor market, at least 85% of them gainfully employed.

Yet the official Black unemployment rate in January 2014, 12.1%, was significantly below the rate of the prior January, 13.8%.

But Black teenagers are also bailing out big time. Over the past five years their labor force participation rate fell 11%, to a miniscule 26.4% in January 2014.

In fact, for all races, labor force participation rates for workers in their prime years, ages 25 to 54, are also in free fall. Cite They are too young for Social Security. The vast majority would rather work, or at least look for work, if there were any reasonable employment prospects.

The collapse in Black labor force participation rates may reflect the expiration, on December 28th, of federal unemployment insurance benefits for the long-term unemployed. To remain eligible, beneficiaries are required to continue their job search. Absent those benefits, there is no need to keep looking for jobs they know do not exist—or have been snatched by immigrants.