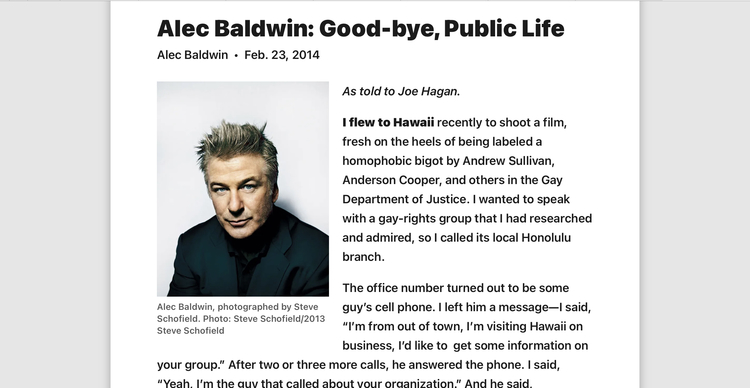 Bad boy-turned-bellyacher Alec Baldwin threw a 5,000-word, seven-page pity party for himself in the entertainment media he says he abhors. Hey, what better way for a Hollywood narcissist to protest the attention-starved shallowness of celebrity life than to wallow in it to the bitter end?

The rage-filled actor's bloated face is on the cover of New York magazine this week next to the headline "I Give Up." Inside, his rambling and nutty "as told to" confessional bids adieu to "public life." Baldwin seethes about, well, everything.

He's mad that countless reporters and photographers dared to cover his toxic little outbursts and violent confrontations over the years, because they ruined his "dreams of running for office at some point in the next five years."

He's mad at gays for calling him out on his gay-bashing statements that he either denies or forgets he made. (Oh, and he throws in a reference to an "F-to-M tranny" just to reassure the "Gay Department of Justice" that they're totally wrong about him.)

He's mad that his fellow New Yorkers don't bow down and kiss his ring like they used to, back in the day when they'd stop him on the corner and heap praise on his charitable activities and work as a "great supporter of the arts."

He's mad at MSNBC for not letting him book actress Debra Winger on his ill-fated, short-lived train wreck of a vanity talk show.

He's mad at liberal doyenne Arianna Huffington for an article in the Huffington Post about pimples.

And he's especially mad, mad, mad about how angry and hateful the rest of America has become. "The heart, the arteries of the country are now clogged with hate. The fuel of American political life is hatred," he fumes. It's all the fault, he fulminates, of "Roger Ailes," "Fox News" and "Breitbart."

Funny guy. These complaints are coming, after all, from the hate-clogged hate-monger who called Andrew Breitbart "a festering boil on the anus of public discourse" for exposing rapes and violence at Occupy Wall Street camps—and who taunted Breitbart's friends after the father of four's tragic death in 2012 by gleefully floating conspiracy theories on Twitter.

Bawling Baldwin can't take it anymore, America, but he sure loves to dish it out.

Remember: Our born-again champion of civility and tolerance is the same rageball who attacked a Starbucks barista he didn't like as a "queen," derided conservative women who identity themselves as "moms," mocked Filipina women as mail-order brides, smeared the entire state of Florida as a "f***ed up parallel universe" and savaged an American Airlines stewardess who told him to put his iPad away before takeoff. "Last flight (with) American," he sneered. "Where retired Catholic school gym teachers from the 1950s find jobs as flight attendants."

This abuser of service workers and serial misogynist's laments for a kinder, gentler America ring hollow. But they're not nearly as hollow as his habitual threats to disappear from public life.

Bloviating Baldwin threatened to move to Canada if George W. Bush won a second term, but he never followed through.

He threatened to quit show biz last fall, but he didn't go anywhere.

He's threatened to quit Twitter at least three times, but he always comes back.

Now he's threatening to decamp from the mean streets of Greenwich Village to Los Angeles, that sanctuary of privacy and oasis of compassion and sincerity, where the baristas will be more servile and the photographers will put down their cameras and toss rose petals at his feet.

Babbling Baldwin says he'll never talk to an American publication about his "personal life" ever again. If only it were true. We all know this drama queen ain't going nowhere. He won't leave the spotlight. He's addicted to fame and dependent on infamy. It's all he has left.