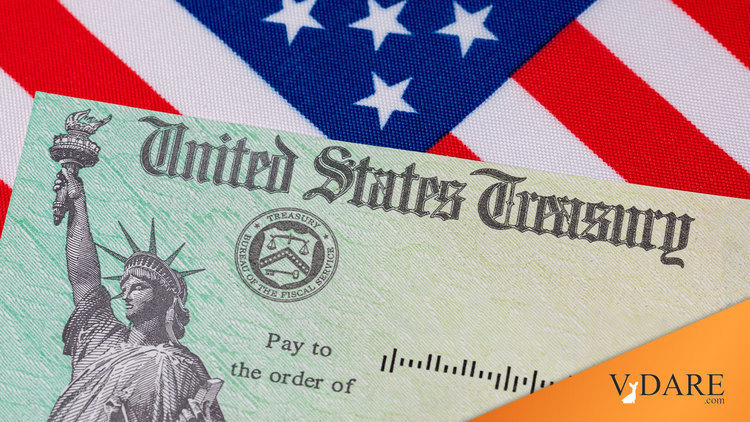 The story so far: the 2013 Schumer-Rubio Amnesty/ Immigration Surge bill, which aims to double legal immigration from what are already historic highs, must be regarded as the 1965 Immigration Act on steroids. The 1965 Act notoriously unleashed an era of mass immigration after a 40-year lull, and shifted the ethnic mix of new immigrants from predominantly European to Hispanic and Asian. It is responsible for setting the US on the path to a white minority by 2040 or so. It has had other consequences that the Main Stream Media won’t discuss, so VDARE.com (not for first time).is filling the gap. Today: poverty.

For two decades following the end of World War II, poverty rates fell like a stone. In 1947 nearly one-third (32%) of all families were officially classified as poor. [Have Antipoverty Programs Increased Poverty?  By James D. Gwartney and Thomas S. McCaleb, The Cato Journal, Vol. 5, No. 1 1985] By 1959, only one-fifth (22.4%) of persons had incomes below the poverty line. By 1973 the fraction of American families living in poverty dropped by more than half, to just over a tenth (11.1%).

But then progress against poverty stalled—and it has never resumed. The poverty rate rose back into the 15% range in the 1980s and early 1990s. The late 1990s boom, and welfare reform, pushed poverty down to 11.3% in 2000. But it has been on an upward trajectory since then.

Poverty rates have never broken under the low set in 1973—forty years ago. 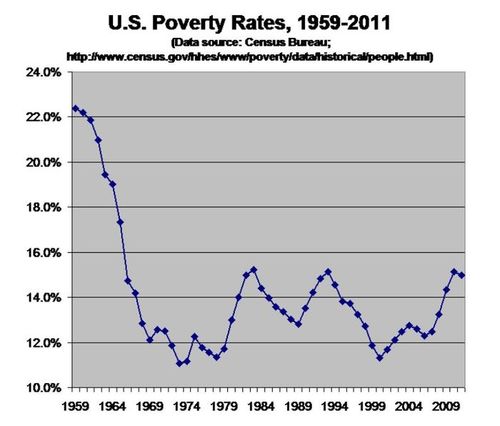 Note that most of the postwar poverty decline occurred before Lyndon B.  Johnson’s “Great Society” came on stream. Indeed, progress against poverty came to a grinding halt just as anti-poverty programs were expanding at a record pace and the economy was booming.

Why? No-one seems to know. True believers on the right blame the poverty programs themselves. In their view perverse incentives embedded in Great Society programs eroded the need for the unemployed to find work and for the near-poor to avoid poverty: people made themselves poor to qualify for the means-tested goodies. Other explanations include technological change—fewer low-skilled workers are needed.

Needless to say, what Peter Brimelow called in Alien Nation the “immigration dimension” is invariably ignored in conventional discourse. But it is must be huge. In the five years prior to 1965 the number of persons obtaining legal permanent resident status averaged 284,000 per year. In the subsequent five years, this legal immigration averaged 359,000 per year; by the 1990s an average 980,000 new legal permanent residents were admitted annually.

As quantity increased, quality declined. The newest immigrants in 1960 were better educated than the native-born; by end of the 20th Century the newest arrivals had almost two fewer years of education. [George Borjas, The Top Ten Symptoms of Immigration, CIS, November 1999]

Only since 1993 has the Census Bureau recorded yearly changes in the nativity of the U.S. poverty population. The immigrant share of that population has risen significantly since then: 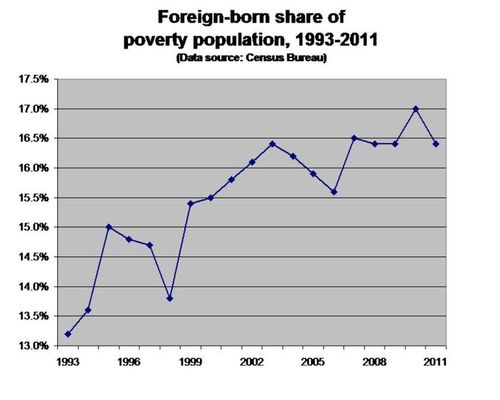 The twenty-year trend, however, is obvious and ominous.

Of course, a full accounting should add the native-born children of immigrants living in poverty. First generation immigrants and their minor children comprise about a quarter of all poor persons in the United States.

Data for 2011 show that the poverty rate for recent (non-citizen) arrivals is nearly twice that of natives:

Worse, optimism about second- and third- generation immigrants is misplaced: The poverty rate for native-born Hispanic adults, a community largely created by post-1965 public policy, is 21.5%—more twice the corresponding rate for whites:

Only native-born black adults, with a 28% poverty rate, fare worse than native-born Hispanics.

With Hispanic birth rates so much above the national average, even an immigration moratorium might not keep poverty from drifting higher. But it would slow the deterioration.

The 1965 Immigration Act was a disaster for America. Incredibly, the 2013 Amnesty/ Immigration Surge Act aims to compound that disaster.