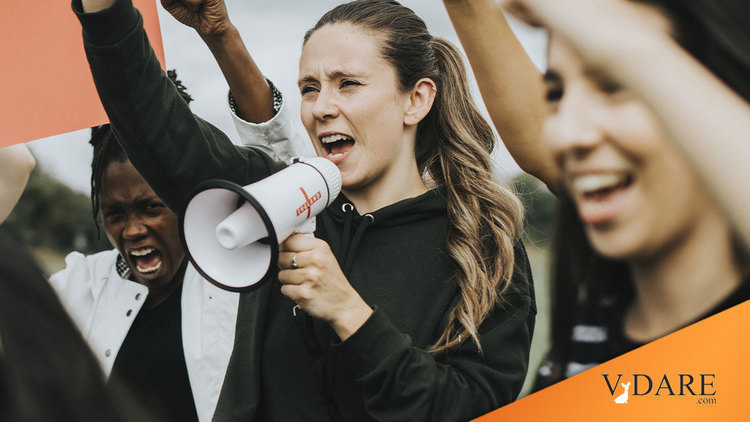 Flip-Flop On Feminism—Is Race Next?

Taking Sex Differences Seriously, a fine new book by Steven E. Rhoads, a professor of government at the University of Virginia, documents that just about every male-female stereotype you ever heard is true. Most of them stem from disparities in sex hormones. 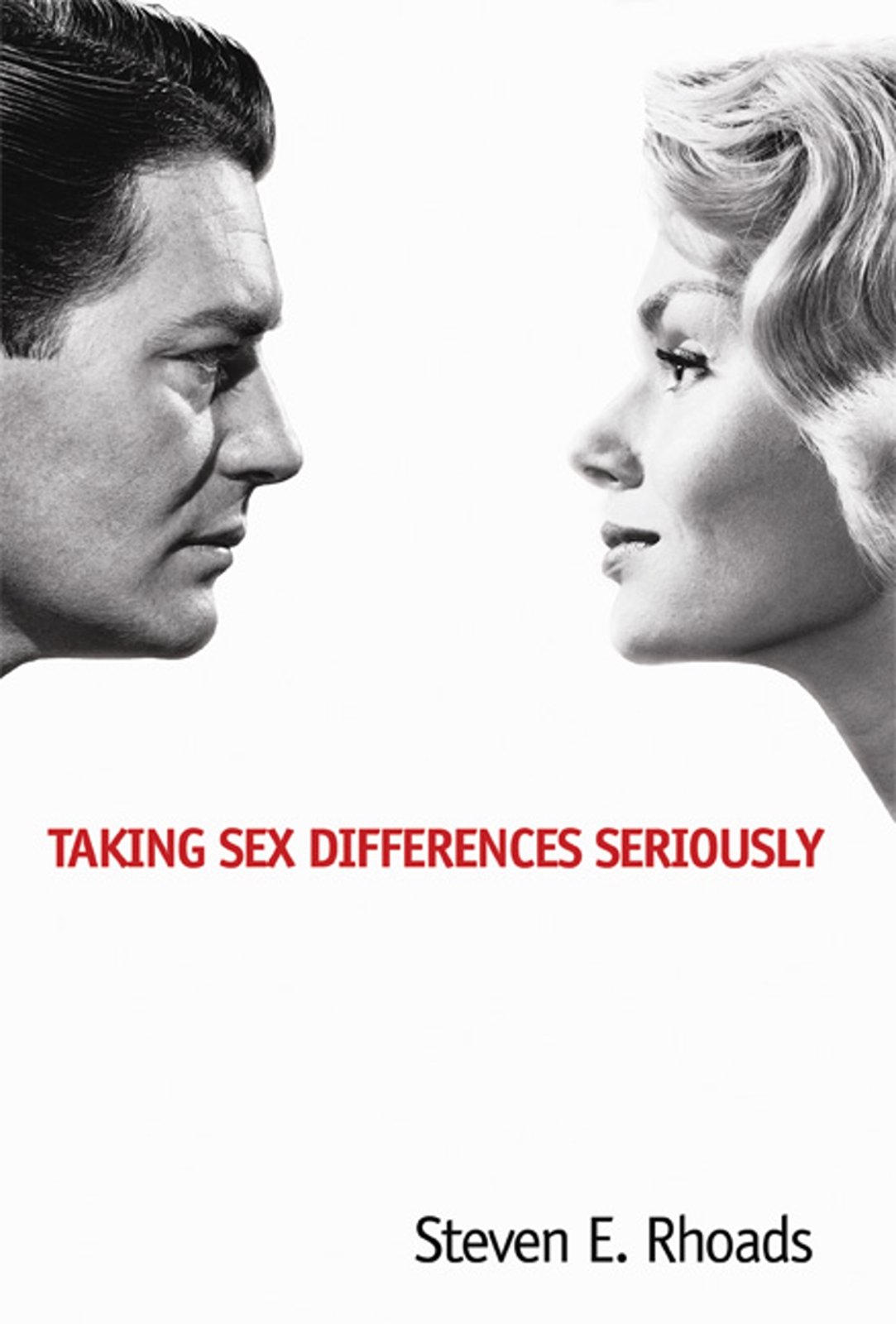 Reading Taking Sex Differences Seriously was something of a nostalgia trip for me. The questions Rhoads grapples with were ones of intense personal concern back in the early 1990s. At the time, feminists dominated public discourse with their insistence that distinctions between males and females were purely social constructs.

But somebody forgot to give my baby son the memo.  In 1990, at only 15 months old, he suddenly developed an intense disdain for all things girlish, along with a corresponding passion for watching strong men hit balls with sticks. My wife discovered, to her exasperated boredom, that her baby boy instantaneously began to whine anytime she tried to flip past televised baseball or, God forbid, golf. Whenever we left the house on a walk, he'd immediately have to find a stick to brandish menacingly, like the killer ape in 2001.

And he began throwing store-aisle temper tantrums whenever his mother denied him a flashlight (or toy sword, gun, spear, rocket ship, baseball bat, bow and arrow, screwdriver, slingshot, or whatever other "projection" device struck his hormone-warped fancy).

She learned there was only one way to silence him.

"That's a Girl Flashlight," she'd explain. "They're all out of Boy Flashlights. Do you still want it?"

Believe me, socialization isn't what differentiates the sexes—it's the only hope of their ever getting along civilly.

Then, in October 1991, the world seemed to go crazy over the Anita Hill-Clarence Thomas brouhaha.

To me, it appeared obvious that Hill was another attractive, accomplished black woman whose biological clock was ticking loudly as she searched for that rare black man of even greater achievement. Perhaps the crime of Thomas, the most eligible bachelor she had known, was that he had not propositioned her when he had the chance. And, worst of all, he had gone on to marry a blonde. Now, the woman scorned was having her furious revenge.

But the press, propelled by women reporters like Maureen Dowd of the New York Times, went bananas over the story. In the aftermath, feminism ruled unchallenged, with deeply stupid books like Naomi Wolf's The Beauty Myth and Susan Faludi's Backlash jet-propelled up the bestseller lists by the media frenzy.

Faludi argued that the media was severely biased against feminism. But of the 40 reviews of her book I found in the media, 37 were favorable. Which didn't exactly add up to a backlash.

The next fall, with his feminist wife Hillary by his side, Democrat Bill Clinton rode "The Year of the Woman" hoopla into the White House.

I had been traveling to Arkansas frequently to call on Wal-Mart. (I used to be a contender!—working in marketing, not journalism.) Arkansawyers regaled me with tales of their Gov. Clinton's adulterous exploits. So, in December of 1992, shortly after his election, I wrote an article beginning: "A specter is haunting the Clinton Presidency, one that the President-Elect needs to defuse immediately."

Forgive me for quoting from my 1992 essay at length, but it proved prescient:

"If I was an investigative reporter wishing to make a name for myself as the Woodward/Bernstein of the 90's, I'd be highly intrigued by these facts: Governor Clinton has for many years presided over thousands of female state employees…He is widely reputed to be a man like any other man, only more so… It seems likely that some enterprising reporter is going to think it worth his while to go Pulitzer hunting among the secretarial pools and law offices of Little Rock… At any moment over the next four years, a vast brouhaha may erupt. While initially amusing to contemplate, the thought of a Watergate-like paralysis of the executive branch … is not.

"If Mr. Clinton has any secret worries on this score, he should act now. A vague confession and apology would cause a short flurry of tsk-tsking, but the ultimate loser would not be the President but the expansive definition of sexual harassment."

Nobody would publish my article. But one of the magazines I sent it to, The American Spectator, did what I advised and sent David Brock to Little Rock. He found Paula Jones, who sued Clinton for sexual harassment (and eventually collected $900,000). Jones' lawyers asked the President about his affair with Monica Lewinsky. His perjury led to his impeachment.

So maybe it was all my fault.

One unexpected dividend from all this: Clinton's survival, which depended significantly on his near-unanimous support from hypocritical feminists, ended the era in which intelligent people took feminism seriously.

Feminism's intellectual demise has not hurt its institutional strength (yet). Thus Rhoads documents how Title IX forces colleges to dump male sports like wrestling and add scholarships for female athletes in sports like golf that few young women care about. Rhoads argues that colleges should instead label cheerleading as a sport, since tens of thousands of young women love it.

Still, Rhoads' book would have been far more daring a dozen or more years ago when feminism was so much stronger. Indeed, way back three decades ago, City College of New York sociologist Steven Goldberg's classic The Inevitability of Patriarchy, which proved the impact of sex hormones on society, won a place in the Guinness Book of World Records by being rejected by 69 publishers before it finally appeared in print in 1973. Today, in contrast, the newsweeklies routinely publish articles on hormones with only a derisory amount of bowing and scraping before feminist dogmas.

The interesting question: will the discussion of race differences some day undergo the same intellectual liberation?

I'd say the long-run prospects are good. The onrush of the genetic analyses will soon settle these questions once and for all.

And greater integration brings people of different races in closer contact. For example, interracial marriage is one little-noticed cause of more people becoming personally aware of racial differences. Quite a few of the leading race realists, such as psychometricians Charles Murray and Chris Brand and essayist John Derbyshire, have married women of other races.

On the other hand, the current trend in the media is strongly toward more lying about race and more demonizing of the honest.

So expect the climate to get worse before it gets better.

But ultimately, as the Great Flip-Flop On Feminism demonstrates, freer days are coming.