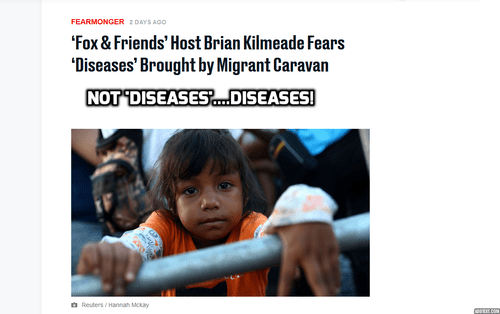 We live in bizarro times. Suddenly, it is controversial to state obvious, neon-bright truths. This week, it has become newsworthy to observe that illegal border-crossers who circumvent required medical screenings are a threat to America's public health and safety.

Just look at these hyperventilating headlines and tweets.

From Newsweek, which is supposed to, you know, report actual news of the week: "'We don't know what people have': Laura Ingraham calls migrant caravan a health issue."

This is not "news." It's propaganda recycled and regurgitated by lazy political operatives masquerading as journalists. At least the Newsweek writer gave credit to his zealous hitmen sources: "Ingraham's comments," he dutifully wrote, "were first highlighted by Media Matters for America."

MMfA is a militant left-wing oppo research outfit funded by progressive billionaire George Soros. Somehow, not-really-Newsweek forgot to mention this fact. (Alas, mentioning Soros subsidies has also become a forbidden act this week, but that's another story.) The determined intent of these "news" pieces is not to inform readers but to inflame them with the dog-whistle assumption that conservatives, Fox personalities and ordinary Americans who worry about diseases from immigration are de facto racists.

On cue, tennis star and celebrity leftist Martina Navratilova barked at Fox News' Kilmeade on Twitter: "YOU ARE THE DISEASE! the migrants are not the problem, trump and his sycophants, like you, are the problem. Stop spewing fear and prejudice."

And former Clinton press flack-turned CNN hack Joe Lockhart wrote: "This is the disease Fox News spreads every day. They are complicit with Trump in trying to change the character of our country."

Newsflash, fake newsers: It's neither racist nor xenophobic nor hateful to discuss the impact of unfettered mass immigration and unvetted caravans of illegal border-crossers on our public health.

My parents, legal immigrants from the Philippines, were screened for a panoply of communicable and infectious diseases.

My husband's great-great grandparents and their relatives from Ukraine underwent thorough medical and physical exams at Ellis Island immediately after disembarking from their arduous transatlantic journeys. A team of doctors checked for everything from eye disease and muscle weakness to heart conditions, ringworm and mental deficiencies. Those who failed were rejected and ejected. No appeals, no apologies, no amnesty.

I find it especially bizarre that some of the same outspoken, big government advocates for vaccinating every American citizen, young or old, against every possible condition, from the flu to chickenpox to HPV, are the same types now howling over the commonsense idea that we should protect ourselves from foreign diseases.

It wasn't Trump's idea to build a wall against microscopic invaders.

The Immigration and Nationality Act mandates medical screening exams for legal immigrants and refugees from around the world. The tests are performed by authorized physicians in either the applicants' countries of origin or in the United States. The process includes "a physical examination, mental health evaluation, syphilis serologic testing... and chest radiography followed by acid-fast bacillus smears and sputum cultures if the chest radiograph is consistent with tuberculosis (TB)."

Moreover, the Centers for Disease Control, not Fox News or the Trump White House or any other evil conservatives, reports that "most experts agree that testing for TB, hepatitis B, and HIV should be performed for most new arrivals to the United States. Clinicians should also make a habit of ensuring that this screening has been done for every new non-US-born patient they see, regardless of time since the person's arrival."

Actual public health experts across the Southwest have reported rises in drug-resistant TB and dengue fever. In June, Australian public health researchers reported that "scabies, long considered a disease of the past in the developed world, is making its way back." The scientists pointed to mass global migration as a leading factor, noting scabies outbreaks among refugees to the European Union and along America's southern border.

It's simply insane to argue we should turn a blind eye to the health status of law-breaking aliens. And it's treachery, yes, treachery, for so-called journalists to use their platforms to blithely smear those who dare to question open borders orthodoxy or report the highly inconvenient facts.