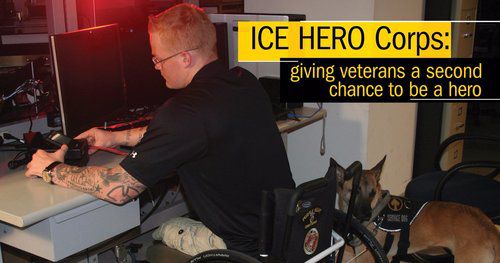 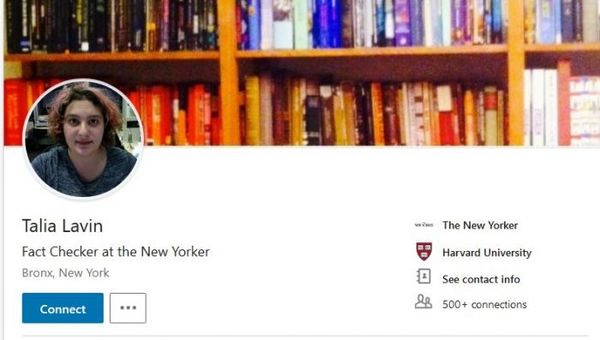 Take Talia Lavin, a young journalist who has enjoyed a meteoric rise. Her pedigree appears impeccable on its face: She graduated with a degree in comparative literature from Harvard University six years ago. After graduation, she won a Fulbright Scholar fellowship to study in Ukraine. She "worked in all realms" of the Jewish Telegraphic Agency news agency and wire service, copy-edited for the feminist Lilith Magazine, and contributed stories and translations for the Huffington Post.

Lavin has held the coveted position of "fact-checker" for the revered New Yorker for the past three years. The publication brags that its "fact-checking department is known for its high standards." It demands the ability "to quickly analyze a manuscript for factual errors, logical flaws, and significant omissions." The editorial department requires "a strong understanding of ethical reporting standards and practices" and prefers "proficiency or fluency in a second language."

Impressively, Lavin speaks four languages (Russian, Hebrew, Ukrainian and English). Her abdication of ethical reporting standards, however, raises fundamental questions not only about her competence, but also about her integrity—not to mention the New Yorker's journalistic judgment.

Lavin, the professional fact-checker, rushed to judgment. She abused her platform. Amid the national media hysteria over President Donald Trump's border enforcement policies, Lavin derided a photo of Gaertner shared by ICE, which had spotlighted his work rescuing abused children. Scrutinizing his tattoos, she claimed an image on his left elbow was an Iron Cross—a symbol of valor commonly and erroneously linked to Nazis.

The meme spread like social media tuberculosis: Look! The jackboots at ICE who hate children and families employ a real-life white supremacist.

Only it wasn't an Iron Cross. It was a Maltese Cross, the symbol of double amputee Gaertner's platoon in Afghanistan, Titan 2. He lost both legs during an IED-clearing mission and earned the Navy and Marine Corps Achievement Medal with Combat Valor and the Purple Heart before joining ICE to combat online child exploitation.

When actual military veterans, whom Lavin failed to consult before defaming Gaertner so glibly, pointed out that the image looked more like a Maltese Cross, Lavin [Email her] deleted her original tweet "so as not to spread misinformation."

Too damned late. The harm to Gaertner's name and honor is irreparable and cannot be unseen, unread or unpublished.

The New Yorker issued an obligatory apology and acknowledged that "a staff member erroneously made a derogatory assumption about ICE agent Justin Gaertner's tattoo." But what consequences will there be for her journalistic malpractice? Who is supervising her work at the famed publication? What other lapses might she be responsible for during her present and past stints as a checker of facts and arbiter of truth?

The magazine editors claim "we in no way share the viewpoint expressed in this tweet," yet the abject ignorance of, and knee-jerk bigotry against, law enforcement, immigration enforcement and the military underlying Lavin's slime run rampant in New York media circles. And they all know it. 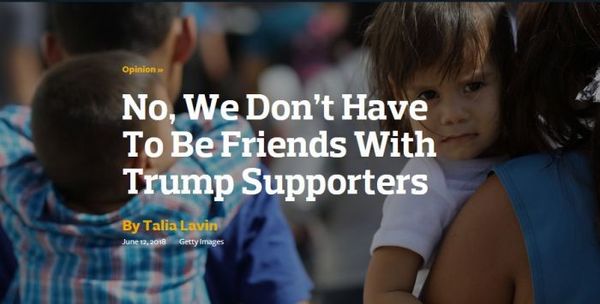 Lavin has not commented on the matter and instead turned her Twitter account private. But we can infer her attitude about her present troubles from a defiant piece she published just last week in The Forward magazine, where she pens a regular column. Titled "No, We Don't Have To Be Friends with Trump Supporters," the piece, laden with Nazi allusions, decries asylum reform, strengthened borders and ICE agents enforcing the law.

Rejecting calls for decency in public debate over these contentious matters, she spat:

"(T)ough nuts, sugar. When they go low, stomp them on the head."

"It is high time, when you find yourself next at a dinner party with someone who has gone Trump, to smash your glass to shards and leave. It is time to push yourself away from the table. It is time to cease to behave with subservient politesse towards those who embrace barbarity with unfettered glee."

Better "gone Trump" than gone mad. In her unfettered haste to condemn those with whom she disagrees, the New Yorker's professional fact-checker failed to check her own toxic biases. Lavin's act was no innocent gaffe. Like the journalists-turned-propagandists who have falsely spread Obama-era photos of immigrant detention centers to attack the Trump White House, Lavin engaged in mass manipulation under the guise of resistance journalism.