Earlier by Steve Sailer: Judge Gets Canceled for Speaking the Unspeakable: "I Believe A-- L---- M-----"

Should a peaceful, law-abiding man of faith be punished in perpetuity for publicly proclaiming his heartfelt belief that "ALL LIVES MATTER ... EVERY SINGLE ONE"?

The question is not merely rhetorical. It is now a legal matter for a California court and jury to decide. Grant Napear, radio talk show host and former announcer for the Sacramento Kings basketball team, filed a lawsuit last week against his former employer, Bonneville International Corp., after the Utah-based media conglomerate threw him under the bus last spring to mollify the un-mollify-able Black Lives Matter mob.

In case you had forgotten, hordes of lunatics across America lost their minds over the Minneapolis police–involved death of career criminal and drug addict George Floyd. Coast-to-coast riots caused nearly $2 billion in damages and cost scores of lives—all under the guise of "social justice" and "peaceful protest," of course. Those who dared stray from BLM orthodoxy—no joking allowed, no defense of law enforcement allowed, nothing less than full and immediate genuflection to the vengeful gods of "diversity" allowed—faced moral condemnation, social media persecution and even employment termination.

Napear suffered all three punishments. His crime? In response to NBA player DeMarcus Cousins' tweet to him asking "what's your take on BLM?" the veteran sports journalist answered with those fateful six words: "ALL LIVES MATTER...EVERY SINGLE ONE." 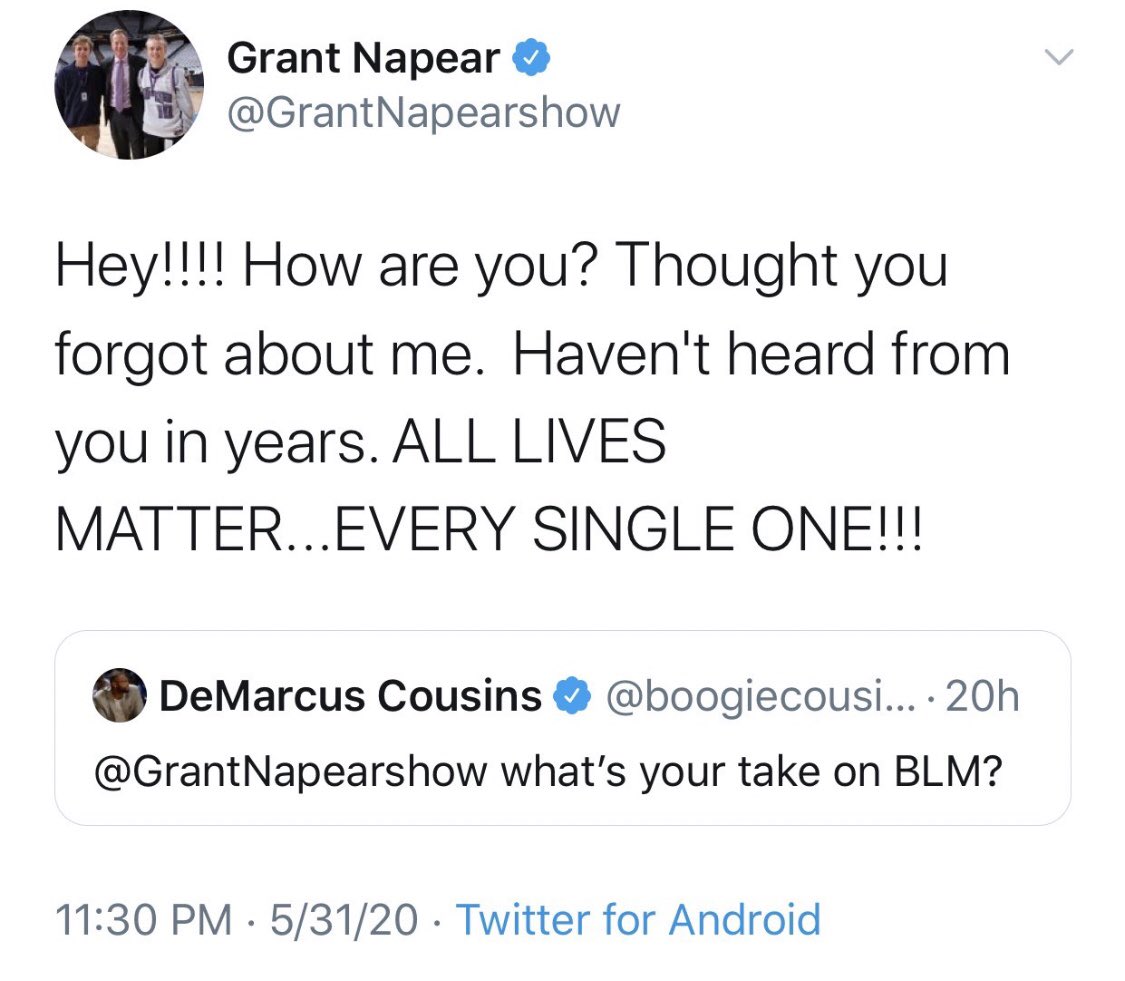 A tsunami of hate and smears ensued on social media. Another NBA player, Matt Barnes, gleefully tarred Napear as a "closet racist" and stoked a backlash. Barnes had preexisting grudges against Napear, who had called him out over a nightclub brawl that led to criminal charges against Barnes for assaulting a woman in 2016, among other unruly incidents.

"Plain and simple," Napear told me in an interview on Monday, "Matt called me a closet racist on Twitter to get back at me. The sad thing is his tweet was taken as judge and jury. If I'm a closet racist, why did you come on my show every week and ask to play in my golf tournament? This is just part of the sad cancel culture that exists in our country now."

Within 48 hours, corporate cowards at Napear's Sacramento radio station, KHTK, fired the 62-year-old veteran sports journalist, despite more than two decades of superlative work on the airwaves. Parent company Bonneville condemned Napear's innocent message as "particularly insensitive," kowtowing to BLM by expressing its "respect" for "the black community" and "marginalized" people. (Never mind all the black small-business owners and police officers targeted by Floyd-worshiping looters and shooters, or the white citizens marginalized for demanding law and order.)

In his lawsuit filed last week with the Eastern District of California court, Napear cited his religious beliefs in "the inherent worth and dignity of every person" and "the right of conscience and the use of the democratic process within our congregations and in society at large." Off with his head! Napear recounted how KHTK barred him "from the Company premises as if he were a criminal," despite a spotless and exemplary employment record. His complaint laid out how Bonneville fired him "for cause" without any justification or explanation of how his tweet in defense of the sanctity of all life constituted "misconduct."

Napear unflinchingly called out the corporate media giant for illegally discriminating against him "because he is a Caucasian male who published a phrase on social media" that went against Bonneville's unstated policy supporting BLM.

Asked for any response to the suit, a Bonneville spokeswoman informed me this week: "We have no comment."

As for Napear, he told me Monday: "My message is simple. What happened to me was a travesty. I'm trying to right a wrong. My hope is a victory will send a message to those who think canceling people for their beliefs won't be tolerated." He is standing in the breach because "too many people are scared to speak up for what they believe in and what is right. I've had numerous private conversations with some of the biggest names in our industry. They've told me they are nervous about saying something on the air that will be misconstrued, or misinterpreted." Napear has also talked to sports team owners who believe "it is easier to go woke then deal with criticism."

But instead of going gently into the good night over "six truthful words" that "ended my career," Napear is holding the feckless smear merchants accountable. "I want to be vindicated. I want Bonneville International to apologize to me. I want them to admit they panicked and made a mistake," he told me. "I am energized and ready to fight this battle not just for me, but for all of those who have been victims of this sick cancel culture."

In what remains of the land of the free and the home of the brave, Grant Napear's life and livelihood matter. All the witch-hunters who tried to destroy him must be held to account. Every single one.