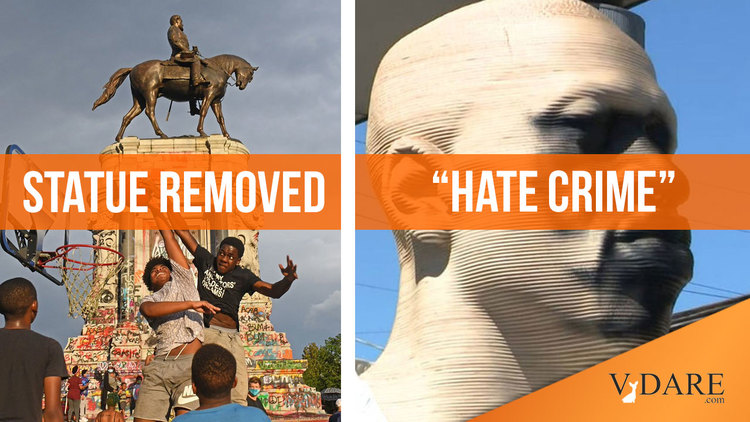 MEMO FROM MIDDLE AMERICA: The SPLC Still Whipping Up War On Confederate Monuments—Where Is This Hatred Headed?

The City Cleanup Corps is repairing the statue right now and a hate crime investigation is underway. We will bring these cowards to justice. pic.twitter.com/mTwzwIyG4z 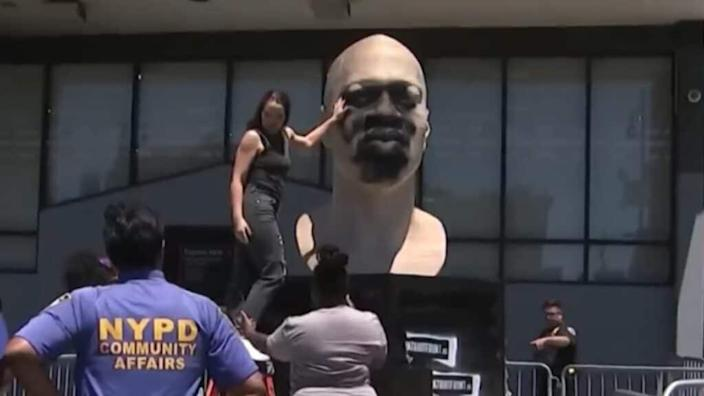 The contrast with the reactions to the public vandalism of Confederate statues—some of which are sculptural masterpieces—is breathtaking. Thus Virginia Governor Ralph Northam did nothing when Black Lives Matter rioters vandalized Antonin Mercié’s magnificent rendition of Robert E. Lee in Richmond. The war on Confederate images is moving along strongly—and it's part of a  war on America.

For the record, I’m not a neo-Confederate. My Union Army kinsman James Dunlavy, received the Medal of Honor in 1864 for capturing Confederate general John Sappington Marmaduke. Still, I recently learned I have other kin in the South who did support the Confederacy. Like many Americans, I had family on both sides. For me, this war on monuments, now including The Great Emancipator himself, is a war on my heritage, and that of all Americans.

Last year, I traveled through the South and saw a lot of history that should be preserved. This year, I returned, and found an out-of-the-way monument to which the $PLC has laid siege with an anti-white, statewide leftist outfit.

Heading westward through North Carolina on Interstate 85/40, a billboard about a Confederate monument—but not directing motorists to it —piqued my interest.

My 18-year old son was driving, which gave me the freedom to do some quick cellphone research.  I discovered we weren't far from that monument.

The increasingly unhinged SPLC’s partner is the North Carolina Commission on Racial and Ethnic Disparities, also known as NC CRED. Not that you need to know, but NC CRED, its website proclaims, is “a nonprofit, nonpartisan organization that works across professional, political and ideological lines to identify, document, and develop strategies to reduce racial disparities in North Carolina’s juvenile and criminal justice systems.”

That’s the long way of saying it wants to see fewer blacks convicted for the violent crimes they commit. Anyway, the group has mounted a campaign, with $PLC’s help, of course, to remove all 42 Confederate monuments that adorn the Tarheel State’s county courthouses [Campaign to Remove NC’s Confederate Monuments, NCConfederateMonuments.org].

Dedicated in 1914, thanks to the United Daughters of the Confederacy, the monument in Alamance County is a 30-foot column topped with a Confederate soldier [Alamance County Confederate Monument, NCPedia]. Here are the inscriptions on its north, south, east and west faces:

To commemorate with grateful love the patriotism, valor, and devotion to duty, of the brave soldiers of Alamance County …

On Fame’s eternal campground, their silent tents are spread, and glory guards, with solemn round, the bivouac of the dead …

Faithful until death, they are crowned with immortal glory.

Conquered they can never be, whose spirits and whose souls are free.

Inside the base is a copper box containing the names of 1,100 native sons who served in gray. The monument, which sits on the north side of the courthouse, is surrounded with a wrought iron fence that wasn’t always there. 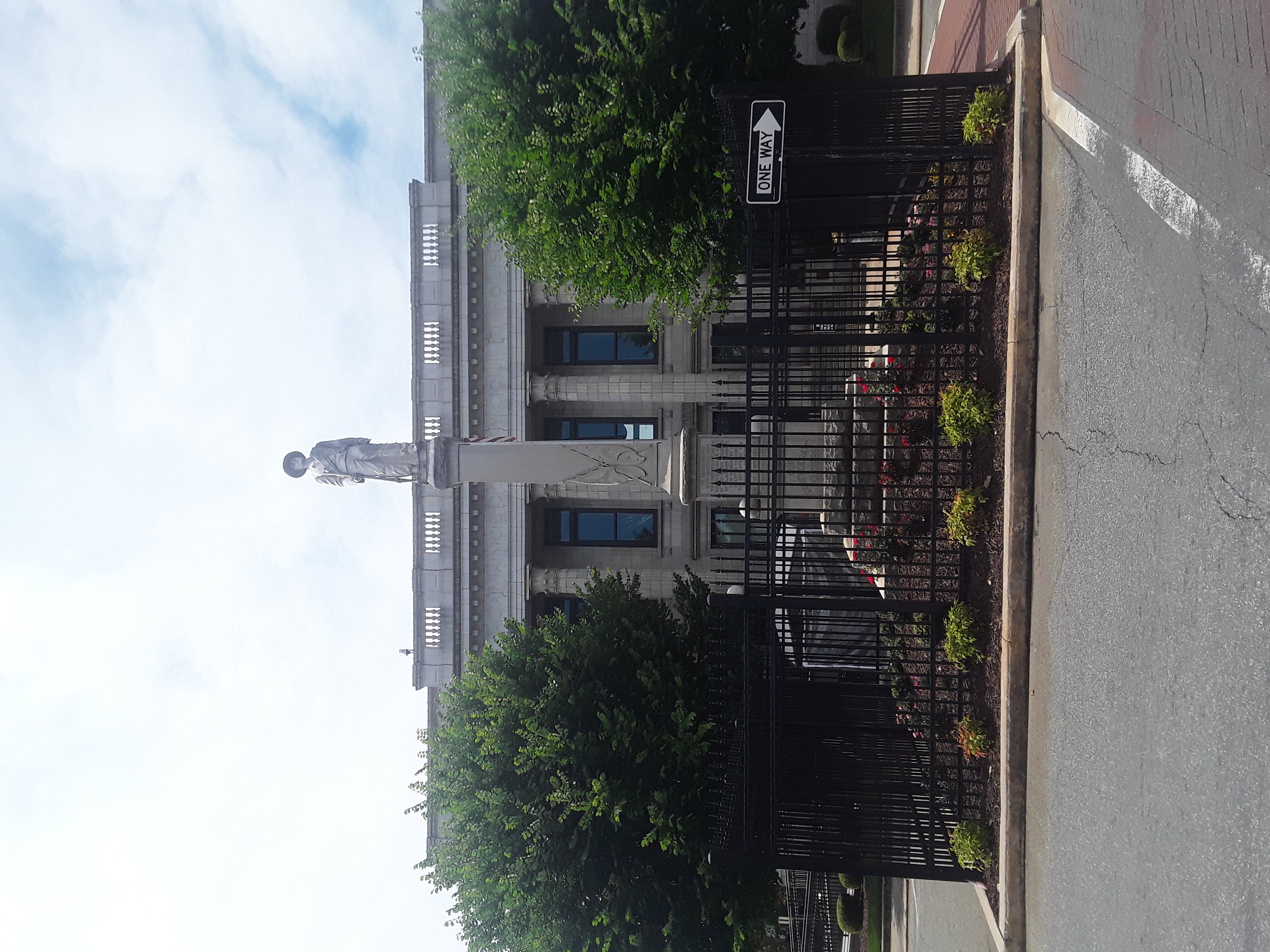 How removing this monument will reduce racial disparities in crime we are not given to know. A better idea might be persuading young black men from committing so many crimes.

Be that as it may, the county sheriff’s department reports 39 protests at the monument in 2020, more than three per month.

All was peaceful the day I visited.

On the other side of the courthouse, by the way, a pickup bearing a Mexican flag drove through the traffic circle. That’s a symbol too. 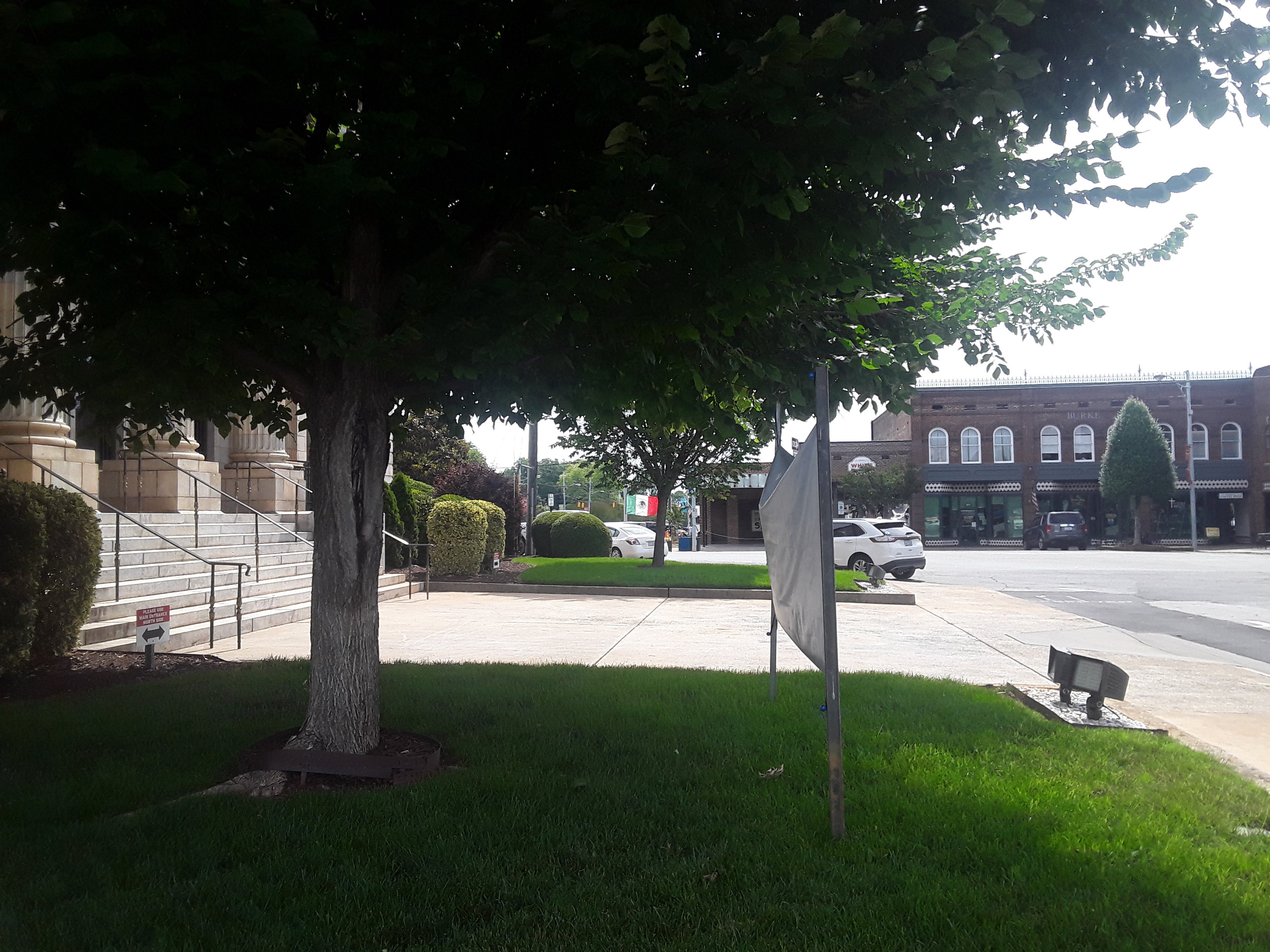 I suspect that if and when Mexicans take over North Carolina, they won’t much care about Confederate monuments, pro or con, or about slavery, or about who won the war. And they won’t feel guilty about blacks.

But the $PLC has taken sides, of course, and plans to bring down every monument or symbol related to the Confederacy.

That’s funny because Morris Dees, the SPLC’s weirdo founder, once said the Confederate battle flag “is just as much a part of my heritage as Dr. King’s march down 6th Avenue.”

But today’s $PLC, absent Dees, are obsessed with driving Old Dixie down. And it has been since 2015, the year that Dylann Roof tragically shot and killed nine people at an all-black church in Charleston, South Carolina. The shooting was $PLC’s pretext for attacking the battle flag, then monuments, as it reported just two weeks ago [Six Years Later: 170 Confederate monuments removed since Charleston church massacre, by Lin Vinson, $PLC, June 17, 2021]:

[T]he SPLC began to catalogue all of the Confederate monuments and other symbols in public spaces across the country and published the data in its Whose Heritage? report. … Since the Charleston Church shooting, more than 300 Confederate symbols have been removed, including 170 monuments.

But, the $PLC warns, plenty more Confederate symbols must be razed, removed, vandalized, and destroyed:

New data from the SPLC also shows that more than 1,895 Confederate symbols are still publicly present in the U.S.; 692 of those symbols are monuments, many of them prominently located at county courthouses and town squares. In addition to monuments, statues, plaques and markers, the overall number includes government buildings, schools, parks, counties, cities, military bases and streets and highways named after Confederate figures.

And $PLC has a new policy about pedestals. Removing a monument and not the pedestal doesn’t count. As far as $PLC is concerned, if the pedestal stands, the monument is still there [A Change in Methodologies].

The Whose Heritage? screed consumes an entire section of $PLC’s site.

No wonder. The war against Confederate monuments went off like an atomic bomb after George Floyd died of a drug overdose while being restrained by police. Hardest hit was Virginia, with 71 removals. “Blackface” Northam is an anti-Confederate zealot.

My home state of Oklahoma was Indian Territory during the Civil War, but the Indians took sides. So down came Confederate Cherokee General Stand Watie, the last rebel general to surrender. A Confederate Memorial Fountain was also removed.

Even South Dakota was on the list. Gettysburg, South Dakota, is a small town largely settled by Union veterans in the 1880s. The city police emblem contained overlapping U.S. and Confederate flags, so it had to go. George Floyd’s uncle lives there [Calls renewed to remove Confederate flag from police patch, Associated Press, June 11, 2020]. Apparently, he is the only black fellow in town.

“Over the course of seven months, more symbols of hate were removed from public property than in the preceding four years combined,” $PLC headmistress Lecia Brooks gloats.

To put this extraordinary frenzy in perspective, remember that no Pope ever thought to destroy the Colosseum, although the Romans actually fed Christians to lions there. The anti-Confederate hysteria is even extending to digging up Confederate dead. You have to wonder where this spasm of sheer hatred is going to end.

There’s something very poignant about these county monuments. They honor the young men, many of them teenagers, who went off to fight for the Confederacy, and in many cases never came back.   Their counties put up these monuments to honor them.

For Americans who live outside cities and towns, such as myself, county government is our most immediate level of government. We don’t vote in municipal elections but we do vote for county officials.   The county courthouse is our courthouse.

When outside activists go into a county and tell people what they can and cannot do, they're not just attacking a monument.   It’s an attack on self-government.   For the activists, that’s probably a feature, not a bug.

The continuing attack on Confederate monuments is an attack on the Historic American Nation, and it was never going to stop, as VDARE.com’s late contributor Sam Francis wrote [The War on White Heritage, American Renaissance, July 2000]—and as we now know from the demand of Macy Gray. She is the black songbird who has demanded that the American flag be redesigned [Macy Gray’s call for a new American flag receives mixed reactions: ‘Now the flag is too white?!,’ by Nate Day, Fox News, June 19, 2021].

Every American who wants to preserve our country, Southerner or not, had better understand this.