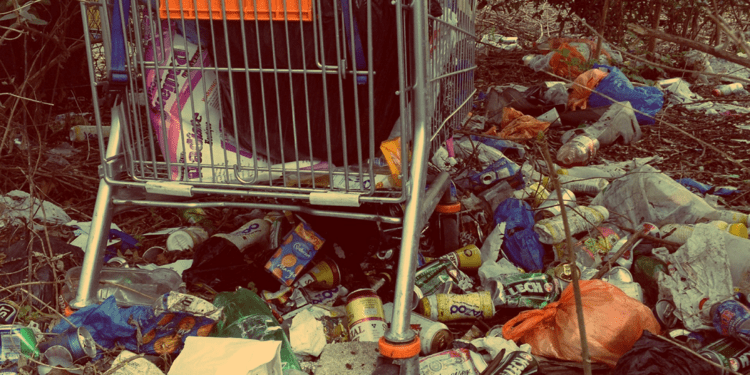 Memo From Mexico | Diversity Is Strength. It's Also…Litter.

Here in Mexico, people toss out litter with reckless abandon. You can see it everywhere—on vacant lots, roadsides, even in irrigation channels. When irrigation season rolls around, it just flows downstream.

You don't have to take my word for it. The Mexican government says the same thing!

SEMARNAT (Secretaría de Medio Ambiente y Recursos Naturales), the Mexican equivalent of the EPA, reported in 2001 that only 53% of the trash in Mexico winds up in officially-designated landfills and dump sites. The remaining 47% is tossed outside "in valleys, roads, vacant lots, bodies of water and 'clandestine dumpsites'".

There's a whole class of workers in Mexico who make a living by selling objects they pick out of trash dumps. They even have a word for that occupation- pepenador. And 15,000 families live in trash dumps!

As another SEMARNAT document describes the situation: "Trash has become a persistent element in our surroundings...."

So yes, there is definitely a problem.

Don't get me wrong. I'm not saying all Mexicans toss out litter (my Mexican wife doesn't, I hasten to add). And I don't deny that there is a problem with litter in the U.S. (That's why they started fining people for littering on the highway).

Generally speaking though, littering is more socially accepted in Mexico than in the United States.

Allow me to share a few observations from Mexico that illustrate the problem:

There are Mexicans who are concerned about this problem and wish to improve it.

Schools try to instill respect for the environment. And there are more public trash cans than there used to be.

SEMARNAT launched its Cruzada por un México Limpio (Crusade for a Clean Mexico), with the laudable goal of "achieving Cities and countrysides free of trash and toxic wastes, which negatively affect the health of the population."

I wish them well. Mexico is a country with beautiful natural scenery, which is marred by all that trash.

But the consciousness-raising has a long way to go.

In the meantime, illegal Mexican immigrants stream into the United States, and bring their propensity to litter with them. They treat the Arizona desert like – well, they treat it like they treat their own country, dumping trash with reckless abandon. (See here and here). Arizona ranchers are expected to just put up with this.

In contrast, George W. Bush doesn't have that problem on his Crawford ranch. Not having to live with the consequences, our president can afford to be an illegal-immigration booster.

But the immigration litter problem is not limited to the border region or California, though that would be bad enough. Reports from places as far removed as Long Island and Washington State associate litter problems with large groups of Mexican immigrants, often of the illegal persuasion.

We are constantly lectured about how enriching "diversity" is. However, we are not supposed to speak publicly about the diverse manner in which diverse social groups treat the environment.

It's become one of those taboo subjects. Occasionally though, it does crop up.

A 2002 article from Washington State (Wind isn't only culprit in roadside litter, Marty Toohey, Tri-City Herald, May 13th, 2002) decries the litter problem in the Tri-Cities area of Washington. One of the problems is human waste in plastic bags being tossed out on the highway.

Near the end of Toohey's article, you find this interesting information:

"The Department of Ecology's advertising campaign on TV and radio originally was broadcast only in English, until Baasch and several others requested a Spanish version, which began airing over the past two weeks."

"Theresa Quezada, president of the Hispanic Outreach Leadership Alliance in Pasco, said that although Mexico is becoming more litter conscious as its tourism industry grows, many of its emigrants come from areas where litter is culturally accepted and aren't told what is expected in the United States."

"She said the Tri-Cities could benefit from increased focus on educating incoming citizens about cultural expectations, and that the classroom is the best place to do it."

I have a better strategy. Tighten the border. Enforce employer sanctions. And quit encouraging illegal immigration!

We have enough problems in our country without importing more people who toss garbage and trash all over the place.