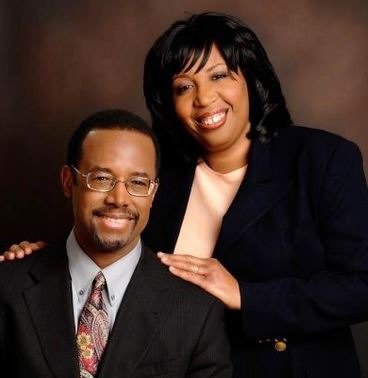 After nearly eight years of the East Wing's politics of mope and complain, it's refreshing to see a presidential candidate's spouse who is always smiling.

While Mrs. Obama first gained notoriety carping about racism and trashing America, Mrs. Carson helped kick off her husband's 2016 bid by playing the violin with a gospel choir as they performed a joyful, rousing rendition of The Star-Spangled Banner.

I met the couple, who recently celebrated their 40th wedding anniversary, a few weeks ago during a campaign stop in Colorado Springs. Dr. Carson's dazzling career as a Johns Hopkins pediatric neurosurgeon is well known. But Mrs. Carson's own personal story is remarkable as a standalone exemplar of the American Dream achieved.

The daughter of a teacher and a factory worker, Candy Carson grew up poor in inner-city Detroit with four siblings. She earned a scholarship to attend Yale University, where she met her future husband and fellow Detroit native. Mrs. Carson triple-majored in music, psychology and pre-med. She played violin for the Yale Symphony and Bach Society. Just as her church-organist mother insisted that all her children learn to play instruments, Mrs. Carson formed a string quartet (two violins, cello and viola) with her own three sons dubbed the "Carson Four."

Feminists loved Mrs. Obama's relentless jokes openly denigrating her spouse's shortcomings as a husband and father on the campaign trail. Victory did not improve her dour disposition. Even after moving into the White House and enjoying multiple taxpayer-financed vacations around the world, President Obama's bitter half bizarrely lamented her plight as a "busy single mother."

By contrast, Mrs. Carson revels in her role as family matriarch and life partner in her husband's endeavors. "The calling of a neurosurgeon isn't easy to live out, and Ben has been required to go above and beyond the call of duty many times," she writes in her upcoming memoir, "A Doctor in the House." "The life of a neurosurgeon's wife isn't much easier. But it's all been worth it. Together, we've been through poverty, tragedy, wealth, and joy, and I've come to love Ben more as each year has passed."

Mrs. Obama regularly grumbles about juggling her various roles. "Finding balance has been the struggle of my life and my marriage, in being a woman, being a professional, being a mother," she kvetched to Ladies Home Journal. "What women have the power to do, through our own experiences, is to push that balance out into the culture. If people are happier, and they're more engaged, and they have jobs they can value that allow them to respect and value their homes, that makes the home life stronger."

Struggle this, struggle that. Time for another Aspen ski vacation or carbon footprint-enlarging jaunt to Milan!

Meanwhile, moms like Candy Carson operate in a no-whine zone. It is a blessing to have so many opportunities and choices. And there's no time to waste.

In addition to raising the Carson children, co-founding the Carson Scholars Fund charity (which has awarded nearly 7,000 scholarships across the country to academically gifted students of all backgrounds who give back to their communities), and serving as sounding board and co-author of three of the Carsons' New York Times bestsellers, Mrs. Carson worked in trust administration, insurance and real estate. She also found time to earn a masters degree in business from Johns Hopkins and conduct the University of Maryland Medical Center Chamber Players.

Like the Obamas, the Carsons have experienced their share of racial discrimination and prejudice. But it does not define them. Neither have they let their phenomenal success get to their heads. "Did I ever imagine I would live in a place like this?" Mrs. Carson reflected in an interview at her elegant home with Baltimore Magazine. "Of course not. Growing up poor, you try to be a good steward of the money you have."

What a refreshing change from the arrogant profligacy that has marked the past two presidential terms in Washington. The most common refrain you'll hear from people who meet the couple is how humble and gracious they are. They've made sure to instill the values of thrift, personal responsibility and private philanthropy in their children. Both Carsons emphasized in our visit their profound concern for their grandchildren's future, the abandonment of constitutional principles, and the fiscal cliff that young generations of Americans now face.

Attitude is everything. The narcissism and nihilism of the Beltway stand in stark contrast to the faith of the Carsons in God, their country and each other. However their political adventure turns out, they are "ready to follow ... whatever He has in store for us next," Mrs. Carson writes.

Keep smiling, work hard, be grateful, and play on. This is what makes America great.