Media Cowards and the Cartoon Jihad 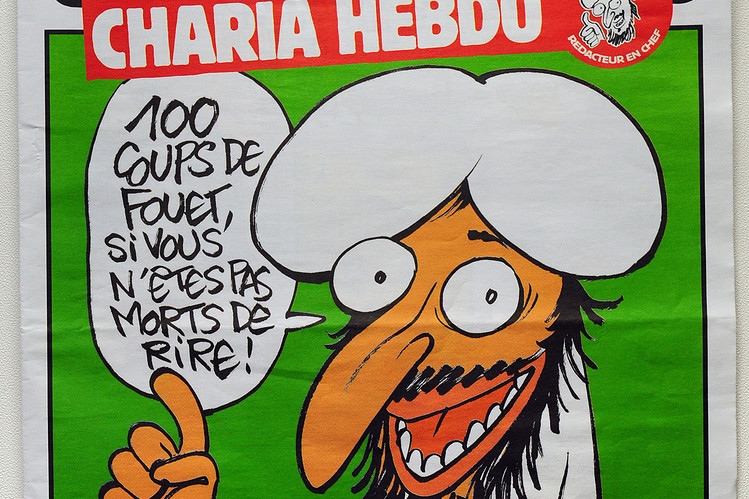 "100 Lashes If You Don't Die Laughing"—the cover of Charlie Hebdo in 2011, after which the office was firebombed.

I have never laughed so bitterly as I did while reading Thursday's lead editorial by the great pretender-defenders of free speech at The New York Times.

Paying obligatory lip service to the 10 cartoonists and staffers of the Paris satirical weekly Charlie Hebdo who were slaughtered for offending Islam, the Times intoned: "It is absurd to suggest that the way to avoid terrorist attacks is to let the terrorists dictate standards in a democracy."

My GPS tracker of journalistic hypocrisy immediately identified the Times editorial board's high-altitude location—ensconced atop their own Mt. Everest of absurdity and self-unawareness.

The Fishwrap of Record priggishly refuses to print any of the Islam-provoking art that cost the brave French journalists their lives. In case you forgot (as its own editorialists have), the Times cowered in 2005-2006 when the Mohammed Cartoons conflagration first ignited. And the publication is capitulating again.

"Under Times standards," a newspaper spokesman said in a statement this week, "we do not normally publish images or other material deliberately intended to offend religious sensibilities. After careful consideration, Times editors decided that describing the cartoons in question would give readers sufficient information to understand today's story."

So says the paper that blithely published a Catholic-bashing photo of the Virgin Mary covered in elephant dung and defended the taxpayer-funded "Piss Christ" exhibit thusly: "A museum is obliged to challenge the public as well as to placate it, or else the museum becomes a chamber of attractive ghosts, an institution completely disconnected from art in our time."

While they feign free-speech fortitude, what Times editorialists really don't want to see is their heads completely disconnected from their necks. Neither do editors at The Boston Globe, ABC News, NBC News, MSNBC and CNBC, who won't publish any possibly, remotely upsetting images of Mohammed, either.

But these quivering double-talkers aren't even the most laughable of Cartoon Jihad cowards.

The Associated Press wins the pusillanimity prize after invoking the sensitivity card to explain why it refrained from publishing "deliberately provocative" Mo toons—even though the media conglomerate had been selling deliberately provocative "Piss Christ" photos on its website. After the Washington Examiner's Tim Carney pointed out the double standards, AP tried to cover its tracks by yanking the pic.

More absurdity? The New York Daily News pixelated a Mo toon carried by Charlie Hebdo as if it were pornography. CNN did the same in 2006, when it explained it was censoring the offending images "in respect for Islam" and "because the network believes its role is to cover the events surrounding the publication of the cartoons while not unnecessarily adding fuel to the controversy itself."

And therein lies the cartoon capitulationists' grand self-delusion. This isn't about cartoons.

Reminder: The First Mo Toons Wars were instigated in 2005 by demagogue imams who toured Egypt stoking hysteria with faked anti-Islam comic strips attributed to the Danish Jyllands-Posten newspaper (whose actual cartoons criticizing Islam were far more innocuous). The real agenda: Islamist thugs were attempting to pressure Denmark over the International Atomic Energy Agency's decision to report Iran to the U.N. Security Council for continuing with its nuclear research program. From Afghanistan to Egypt to Lebanon to Libya, Pakistan, Turkey and in between, hundreds died in insane riots under the pretext of protecting Mohammed from Western slight. Courageous journalists who stood up to the madness were silenced, jailed and threatened with beheading.

Cartoons did not start militant Islam's fire. Neither did the Bushes, Israel, the Satanic Verses, the Pope, beauty pageants, KFC restaurants in the Middle East, Mohammed teddy bears or a YouTube video.

The Religion of Perpetual Outrage hates all infidels for all reasons for all time. The targeting of Mohammed cartoonists is a convenient excuse to feed the eternal flame of radical Islamists' hatred of the West. If it isn't cartoons, it's something else. The grudge is everlasting.

Instead of acknowledging their gutlessness in the face of Koran-inspired Muslim vigilantes, press pontificators cloak their fear in the mumbo-jumbo of "tolerance." They demand that the rest of us pledge fealty to their selective multi-culti sensitivities lest we be branded "Islamophobes."

And then they have the audacity to play "I am free-speech Spartacus" with those who risked life and limb to speak truth to Islamic supremacist power.

Sit down, fakers. You fakin'.