I’m in a very bad mood about President Trump’s failure to keep his promise to pull out of Afghanistan, but I must admit there are some glimmers of hope this week on VDARE.com’s key issue. This week has seen some action, some hints of further action, and some positive rhetoric on immigration.

The most important action, too late for me to conclude in this week’s Radio Derb, was Trump’s pardon of Sheriff Joe Arpaio. VDARE.com has long regarded Sheriff Arpaio as a national treasure: his prosecution was simply a political lynching by an Obama Administration that was treasonously determined not to enforce immigration law; as Powerline.com’s very moderate Paul Mirengoff puts it in a good summary, the pardon “a political end to a political case.” Well done, Mr. President.

Another Trump Administration action involved countries that won't take back their citizens when those citizens have committed crimes in the U.S.A. This is itself a subset of the larger problem of violent alien criminals who you'd think would get deported but never were; not necessarily because their home countries wouldn't take them back, but often just because our own government couldn't be bothered to deport them.

In the particular case of foreign countries that won't take back their criminals, our immigration laws — yes! believe it or not, we actually have laws about immigration, passed by the people's representatives in Congress! — in those cases, our immigration laws provide a remedy. Under Section 243(d) of the relevant federal code, when a country won't accept its nationals,

The Secretary of State shall order consular officers in that foreign country to discontinue granting immigrant visas or nonimmigrant visas, or both, to citizens, subjects, nationals, and residents of that country until the Attorney General notifies the Secretary that the country has accepted the alien.

That sounds pretty straightforward. Given the number of foreign criminals you read about in the press, you'd think that law would be invoked a lot. We arrest a criminal; he turns out to be a foreign national; we try to deport him; his home country won't take him; we stop issuing visas for people from that country. Straightforward, right?

Invoked all the time, right?

Wrong! That law has been invoked just twice this century: against Gambia last year and against Guyana in 2001. And in both those cases, visas were denied only to government officials and their families, not to ordinary visa applicants.

As I've been telling you, we're not short of laws governing immigration, we've only been short of executive will to enforce them. 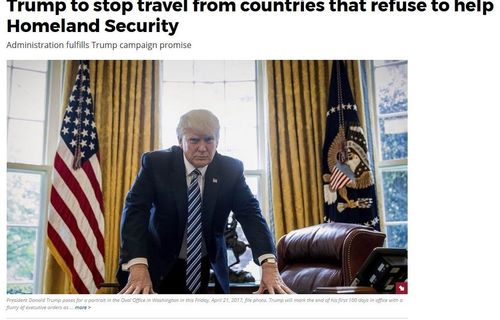 And that may be changing. Tuesday this week we learned that the State Department has triggered visa sanctions under Section 243(d) against four countries that have been refusing to take back their criminal nationals. [Trump to stop travel from countries that refuse to help Homeland Security  | Administration fulfills Trump campaign promise, By Stephen Dinan, The Washington Times, August 22, 2017]  The countries are: Cambodia, Eritrea, Guinea and Sierra Leone. Several other recalcitrant countries, we're told, have started taking back their criminals after threats of visa sanctions, or in return for minor favors.

That's good news; and in fairness to our President, who I excoriate this week on Radio Derb for his Afghanistan flip-flop, it's a fulfillment of one of his campaign promises.(See his September 2016 Phoenix speech—"Number seven, we will insure that other countries take their people back when they order them deported.")

That was the action. The hints of further action concern DACA, Barack Obama's order granting renewable two-year work permits to illegal aliens claiming to have been brought here as children.

Now we're hearing that the President may pre-empt the court case by just rescinding the Obama order, as he is entitled to do. [ Trump seriously considering ending DACA, by Jonathan Swan, Axios, August 24, 2017] As, indeed, he could have done at any time since he was inaugurated; as, on the campaign trail last year, he promised to do, quote, "on Day One" of his presidency.

So why didn't he do it? The theory's been aired — by our own Peter Brimelow, for example — that the President has just, for political reasons, preferred to let the courts do the job for him.

But if that has been the President's strategy, it comes with some risks.

Two years ago, a federal judge in Texas stopped DAPA, a similar program but for adult illegals. The Obama administration appealed to the Supreme Court; but the court deadlocked 4-4 so the lower court ruling stood. The assumptions are that the same Texas judge will give the same ruling on DACA, and that the Trump administration won't appeal.

That second assumption is sound enough, but the first isn't. There are differences between DAPA and DACA. The costs of DAPA to the states were more obviously burdensome than are the costs of DACA, for example. A skillful challenger could contest that point, or some other point, in court and possibly win on the law. No such challenger has so far shown up, but one might.

It would be best — cleanest, most decisive — for the President to act himself before September 5th. I hope he does so.

And finally, the rhetoric. This of course came at the President's Phoenix rally on Tuesday.

Build that wall … The obstructionist Democrats would like us not to do it. But believe me, if we have to close down our government, we're building that wall.

That got the biggest cheer of the rally.

Some sourpusses in the Main Stream Media wondered why it would be necessary to have Congress allocate funds for the wall when Mexico is supposed to pay for it. But Trump supporters, including this one, aren't much bothered about that. We just want the damn wall.

Thank you, Mr. President, for reassuring us that you have it in mind.