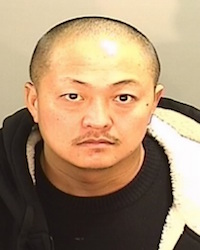 Saturday’s Fresno jailhouse shooting of two unarmed deputies by Laotian Thong Vang (pictured) has shined a light once again (!) on reprobate countries that refuse to accept their deported illegal alien criminals. Tools exist to help the State Department to convince recalcitrant nations to take back their bums, including the ability to block foreign aid or deny visas, but State doesn’t want to ruffle any foreign feathers. Public safety for Americans is not a priority for the executive branch of the federal government.

The recent crime in Fresno went down like this (from Breitbart):

Just after 8:30 am on Saturday morning, [Laotian Thong] Vang was seen trying to cut the visitor’s line in the lobby of the Fresno County jail and began acting agitated, showing “bizarre behavior” and pacing in the vicinity of a secure area when experienced officer Davila confronted him. The AP reported that the facility is guarded by unarmed officers and that visitors must pass through metal detectors to get to secure areas.

Sheriff Mims stated that Davila confronted Vang. Vang then pulled a gun from his clothing and began shooting. Scanlan then also responded to the scene and was shot. An estimated 15 adult and child bystanders fled, according to the AP.

Here’s a local report from KCRA:

What’s been little reported is Vang’s original crime in 1998 that put him jail for only 16 years: as part of the Mongolian Boys gang, he and more than a dozen of his Hmong gangster pals kidnapped, forcibly confined and gang-raped three young girls, aged 12 to 14.

It was such a shocking crime at the time that even the New York Times reported about it, although with its usual camouflage about diversity. The first mention occurred in paragraph #13, but the Times had to immediately balance the word “Mongolian” with a balancing note about a white gang that wasn’t accused of any time.

. . . Woven into Fresno’s subculture are gangs, and the police report on the attack linked some suspects with one called the Mongolian Boys Society. There are a multitude of ethnic gangs here, including a white supremacist gang called the Peckerwoods. Experts on gangs say that the reasons for the high gang activity include Fresno County’s 16.6-percent unemployment rate, largely attributable to a lack of manufacturing jobs and the seasonal nature of the region’s No. 1 industry, agriculture.

In fact, Ann Coulter used the Times’ diversity-defending report as a central part of her media analysis in Adios, America! in a chapter titled, “SPOT THE IMMIGRANT! Case No. 1, Fresno, California.” You can read that chapter in the Google Books file of the book.

Back to the main topic here (non-acceptance of deportees), the upshot about the perp Vang is that he was a very dangerous man who was sentenced to only 19 years in prison and served 16 for crimes of kidnapping and gang-rape of minor girls, and yet the feds apparently did not try hard to get him out of this country. Instead, because of the 2001 Supreme Court decision Zadvydas v. Davis, the government is prevented from detaining an illegal alien beyond his sentence length (with six months wiggle room) if his birth-nation will not take him back. However the United States has legal means to turn the screws on these irresponsible countries, but the Democrat executive branch won’t use them.

There are other cases of deportation rejects going on to commit preventable heinous crimes, for example:

● Accused San Francisco Mass Murderer Was Not Deported to Vietnam

Cases like this are a reminder why Donald Trump’s theme of America First and his sympathy for crime victims of illegal aliens has struck such a strong chord among citizens.

The convicted rapist who shot two corrections officers in Fresno, Calif., last week was an illegal immigrant who was only in the U.S. because his homeland refused to take him, federal officials confirmed Wednesday.

Thong Vang, a 37-year-old Laotian national who completed a 16-year rape sentence two years ago and was slated for deportation, instead was freed when Laotian officials did not respond to a request by Immigration and Customs Enforcement to assist in his removal.

“When Laotian officials failed to respond to that request, ICE released Mr. Vang in December, 2014 due to the Supreme Court’s ruling in Zadvydas v. Davis,” ICE spokeswoman Virginia Kice said. The ruling Kice cited held that immigrants under order of deportation but whom no other country will accept may not be held indefinitely, absent special circumstances. Last year, 3,735 illegal immigrant criminals from Laos were ordered deported but instead freed when the country refused to cooperate.

“This is another horrifying example of the consequences of failing to push the issue of deportations with uncooperative countries,” said Jessica Vaughan, Director of Policy Studies for the Center for Immigration Studies. “Laos has been a problem for many years, and there are more than 3,700 criminals still here as a result, but still the State Department has not lifted a finger to take action against that government. Instead, they keep issuing visas – they gave out more than 11,000 temporary visas in the last five years in Laos, despite the requirement in federal law that they impose visa sanctions on countries that won’t take back their citizens.”

Vaughan said she hopes the wounded officers will recover, and that they and Fresno County officials will ask the federal government for an explanation for why nothing has been done about this problem, and call for action before others are hurt.

By contrast, some 67,792 Mexican nationals slated for removal could not be deported and nearly 29,000 Cubans were also freed after deportation failed.

The issue made national headlines in June, when the Inspector General for the Department of Homeland Security, ICE’s parent agency, blasted the department for not doing more to ensure deportation of a Haitian national who murdered a Connecticut woman after being released from prison.

The Connecticut case prompted House Oversight Committee Chairman Jason Chaffetz, R-Utah, to blast the State Department at a July hearing for not doing more to force recalcitrant countries to take back their criminals. The law states that the State Department must stop issuing visas to citizens of such countries until they cooperate with removals.

“He should have automatically been deported back to his home country of Haiti after he was released from prison,” Chaffetz thundered. “But instead, he was released from custody because Haiti refused to take him back and we just accepted that. We just said, ‘Ok Haiti, we’ll go ahead and keep him here in the United States.’”

The case involving Laotian national Vang comes even as President Obama is in the Southeast Asian country on a diplomatic mission. It is not known if Obama raised the issue of improving cooperation on deportations.

“ICE continues to work through diplomatic channels with its partners at the Department of State to increase repatriation,” Kice said in a statement. “The U.S. government remains firm and focused in its resolve to engage all nations that deny or unreasonably delay the acceptance of their nationals.”

Despite ICE’s inability to deport Vang, the agency had him under supervision and he was complying with orders to report on a regular basis, Kice said.

Vang was in the main lobby of the Fresno County Jail Saturday morning when he opened fire with a handgun, wounding Juanita Davila and Toamalama Scanlan. Davila was listed in critical but stable condition and Scanlan was in critical condition.

Fresno police officials said Vang was acting bizarrely and had been stopped from cutting to the front of the visitation line. Davila and Scanlan were shot when they approached Vang and told him to take a seat.

Vang dropped his weapon and surrendered after the shooting.

Fresno County Sheriff Margaret Mims told reporters after the incident that Vang belongs behind bars, in whatever country happens to hold him.

“This suspect is a prison inmate, a convict, a parole, and maybe that’s where he belongs for the rest of his life,” she said.