John Derbyshire On MS-13 Among The Long Island Kulaks.

It's great that we now have an administration in Washington, at any rate a Justice Department, willing to round up and deport illegal aliens. But federal officers charged with doing so are opposed by a mighty army of lawyers, products of our CultMarxified law schools this past forty years. They also face a lot of local apathy and cuckery. Case study: here on Long Island, where I live, in the outer-outer suburbs of New York City.

My county, Suffolk County, has a million and a half people — 630 per square mile average, though of course concentrated in towns and villages. Close to twenty percent of that million and a half are Hispanic—a colossal increase across the 25 years we've lived here. The biggest single group: Salvadorans. [Which Immigrant Group on Long Island Is the Largest?, By Patrick Young, Esq, LongIslandWins.com January 18, 2011] They started coming during the civil war in El Salvador during the 1980s. Lax enforcement, high fertility rates, and chain migration have done the rest.

Here's a fact about El Salvador: On the latest numbers I can find, El Salvador ranks fourth in the world for intentional homicide. The rate is over 41 per hundred thousand.

To give you some benchmarks, with that 41 in mind, here are current homicide rates for some U.S. cities, also per 100,000 inhabitants:

So El Salvador, not much of which is urban, is more than twice as homicidal as Detroit.

That's what we've been importing into Suffolk County in battalions and regiments this past forty years.

(And I should say that you can get some seriously different figures by going to different sources. The United Nations Office on Drugs and Crime, for example, gives a 2015 figure of nearly 109 for El Salvador, ranking the country world homicide leader. My figure of 41, from the List25 website, is towards the low end of estimates I found.)

Every one of those estimates, though, has El Salvador in the top five nations by homicide rate.

If you were to implement a rational immigration policy, with well-informed analysts sitting around a table deciding which nations we should be really careful about taking immigrants from, there'd be a row of big bold asterisks next to El Salvador.

There are some counter-arguments you can make here. First off, while looking up those city homicide stats, I checked the figure for Suffolk County. It's 0.9. That's high—higher than the rate for Germany or Italy, and three times the rate for Hong Kong or Japan.

Still, set against St Louis or Chicago, we're pretty non-homicidal out here on the island. So what's to worry about? 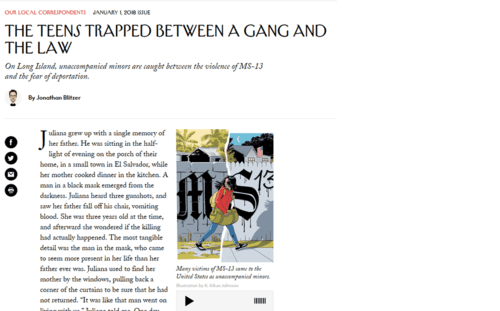 And then, still playing devil's advocate here, those multitudes of Salvadorans coming to my county were escaping from that astronomical homicide rate back home. They were looking for a peaceful life.

To both points I'd refer you to Jonathan Blitzer's piece in the current issue of The New Yorker. Title: The Teens Trapped Between a Gang and the Law. Subtitle: "On Long Island, unaccompanied minors are caught between the violence of MS-13 and the fear of deportation."

In September, 2016, Nisa Mickens and Kayla Cuevas, aged fifteen and sixteen, were found dead in Brentwood, killed with machetes and baseball bats and mutilated beyond recognition. Thirteen members of MS-13 … were charged in their deaths. Between the beginning of 2016 and May, 2017, authorities in Suffolk County attributed seventeen killings to MS-13, and the county's police department identified at least eighty-nine gang members who were undocumented immigrants.

So while a 0.9 homicide rate is pretty nice, without MS-13 hacking teenage girls to death we'd be even safer, perhaps down to German or Italian levels. 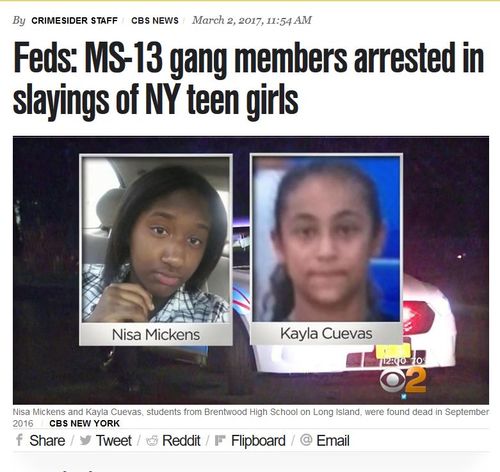 And if all our Salvadoran illegals are gentle peace-loving types striving to escape from the gangs back home, what are these MS-13 killers doing here?

Of course most of the Salvadorans are non-homicidal. So are most Salvadorans back in El Salvador. So are most people anywhere. If you import a great mass of people from one place, though, you'll get a slice of that place's culture. Salvadoran culture is homicidal.

It's the non-homicidal element that propagandists like the New Yorker writer want you to know about, of course. Blitzer [Email him] starts us off with a long sob story about a Salvadoran lass, Juliana, whose father was killed by MS-13.

The gang then chased Juliana's mother around El Salvador until the mother escaped, ending up an illegal immigrant on Long Island. Juliana was left behind. She got kidnapped, raped, and beaten — so she says — until eventually she headed north. She ended up on Long Island with her Mom, both illegal. At school — at school on Long Island — she was pestered by MS-13 gang members. Blitzer writes: "Juliana's mother called the school to complain, but she was undocumented and didn't press the issue."

It's a moving story to be sure. Dreadful things happen in the world, especially in countries with low levels of civilization like El Salvador and Somalia.

Again, though, why is this any business of mine? I'm a suburban homeowner, raising a family in a quiet neighborhood. Is my bourgeois suburban lifestyle something that someone should be indignant about? What am I, a kulak?

It's hard to avoid the impression that Jonathan Blitzer is indignant about it. His contempt for white suburbanites seeps out from between the lines of his article:

Schools in Hempstead required the families of incoming students to produce documents proving guardianship and residency in the district, which very few of them had. This was illegal, and, when New York's Attorney General threatened a lawsuit, the children were admitted.

Local property-tax payers are supposed not to mind this? And since when is it illegal for public schools to require proof of district residency?

I wish I'd known: I'd have sent my kids to school in the much richer village down the road a couple of miles. 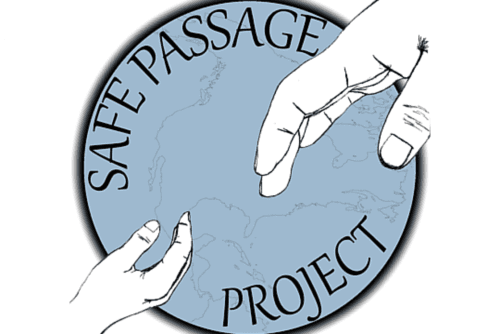 Juliana's story has a happy ending. Happy for her, I mean, not for us Suffolk County homeowners who've paid her schooling and Medicaid bills the past few years. Something called the Safe Passage Project, a non-profit legal-aid group in New York City, worked the system and got asylum for Juliana and her sisters.

The Safe Passage Project looks to be pretty well funded, by George Soros would be my guess.

That's part of the army of lawyers I spoke about, working busily to thwart sensible immigration and to privilege undesirable foreigners over American citizens.

The local apathy and cuckery, I've watched develop. Twenty years ago my county was abuzz with citizens' groups agitating for immigration law enforcement. I wrote articles about it for National Review.

I don’t see much of that now. The local newspapers editorialized about "hate" and "bigotry," the cucks scolded and threatened, and we kulaks tired of fruitless protesting and got on with our deplorable whitebread suburban lives.