That’s one-third of a billion—a milestone. Back in my monthly Diary for October 2016 I grumbled that the number three and its reciprocal one-third don’t get the respect they oughta. Sample quote:

The under-appreciation of three is best seen in the realm of fractions. It is possible to find a ruler marked off in thirds of an inch—I own one—but halves and quarters are far more popular. We say ”a quarter of an hour” all the time; when did you last hear someone say ”a third of an hour”?

What accounts for this apparent slowdown? Falling fertility? Higher mortality? Lower immigration? Higher emigration? It must be some combination of the four, but I’ll leave the professional demographers to sort that out.

Fair enough. The fun here, though, is in watching the numbers roll over, so that’s what I went with.

Long, long ago—I’m talking about the mid-1970s here—I watched with fascination and delight as the odometer on my first American automobile, my dear old 1964 Chevy Nova, rolled over the hundred thousand mile mark. 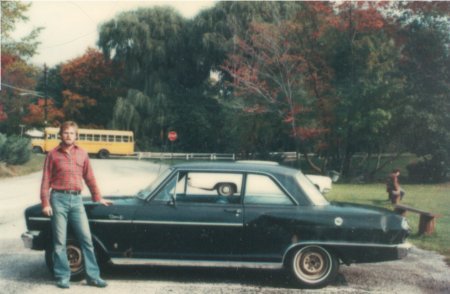 The U.S. population at that time, the mid-1970s, was around 220 million. That was the America I knew in my salad days, the America I fell in love with.

Our population has increased by fifty percent since then. It’s natural to ponder the question: Has that extra fifty percent made the USA a better country, a worse country, or what?

It’s natural to ponder that, but not very fruitful.

For one thing, as any real demographer will jump in to tell you, the size of a population is less important—from most points of view, certainly from the economic one—than its shape. What does the population pyramid look like? That’s the diagram that shows the population broken out by age categories.

The population pyramid for 1975 was a lot more pyramidish than the one for 2020: comparatively more young people, fewer old ones.

For another thing, your genial host here has himself moved up the population pyramid some since 1975. Back then I was a young buck, full of piss and vinegar, a willing customer for any kind of harmless excitement or cultural innovation. Now I’m a geezer—Hey, get off the lawn! Naturally I’m going to smile more fondly on the America of my youth.

All that being allowed for, though, I’m pretty sure something has been lost—something important to a person of nationalist temperament.

Sure, there was plenty of bickering and division back then. The elites of 1975 hated Richard Nixon just as much as the elites of 2022 hate Donald Trump. The race business was as salient then as now… although, I’d argue, less hypocritical. Our foreign policy was as FUBAR then as now: We left Saigon in 1975 as ignominiously as we left Kabul in 2021.

It’s my impression, though, that there was a kind of national solidarity back then that we have lost today. Is that a true impression, or just geezer talk? I don’t know.

What I said earlier needs some major qualification—there is a certain amount of bogosity about demography.

I’m talking about the numbers. I was working entirely from the U.S. Census Bureau’s Population Clock. How accurate is it? Not very, is my best guess.

If you bring up the Population Clock it gives you two headline numbers right at the top there. One is for the U.S.A., the other is the world population.

As I’m looking at it this evening the world population shows as seven billion 938 million and change. Whoa! Weren’t we told, and didn’t Radio Derb report, that world population would increase past the eight billion mark in the middle of November? Yes, we were. And didn’t subsequent news stories tell us that baby Vinice Mabansag, born 1:29 am November 15th in Manila, the Philippines, was the actual eight billionth person? Yes, they did.

Here’s a news story from Tuesday this week that may shed some light. It’s about Papua New Guinea, a nation known to its friends, who are not very numerous, as ”PNG.” PNG occupies one half of a big island in the Indonesian archipelago, just south of the Equator and just north of Australia.

On the PNG government’s own numbers, the country’s population was understood until last week to be 9.4 million. That’s an increase of nearly thirty percent over the 2011 number; so PNG has a booming population. This is not likely due to immigrants flocking to live there. The Daily Mail story, which I’m working from here, tells us that:

The country is … one of the world’s most dangerous and violent nations, with large areas ruled by tribal gangs.

So if you were thinking of booking a summer vacation in PNG for yourself, the spouse, and kids… I’d advise against it.

Anyway, to the main story here. As I said, PNG’s population was understood until last week to be 9.4 million. Well, the United Nations—precisely, the U. N. Population Fund—did a census of their own. That census came up with a PNG population of 17 million, nearly twice the official number.

Papua New Guinea’s prime minister James Marape had to admit that he didn’t know how many people lived on the Pacific island nation he governed.

Moral of the story here: Demography is a noble science, and an important one, but not an exact one.

I have written sympathetically about demography myself. Sample quote from me back in 2011:

Demography, along with its cousin discipline of economics, was ”in the air” during the later eighteenth century … Of these two cousin disciplines, it is a nice point for argument which better deserves to be called ”the dismal science.” I would vote for demography. It must be hard to maintain a cheerful composure while scrutinizing the ceaseless, often inexplicable ebbs and flows of nativity and mortality.

So, with all proper respect to demographers working hard at their science, don’t trust the numbers. PNG, with all its problems, is not the most chaotic and ill-governed of the world’s nations, yet they have, according to the U.N., been underestimating their population by almost half. What is the population of, say, Congo? I doubt anyone has the faintest idea.

And similar qualifications apply to that number for the U.S. population. Sure, it was fun to watch the threes line up on our Census Bureau’s Population Clock; but that they represent an accurate head count, I seriously doubt. The phrase ”good enough for government work” comes to mind.

Over 2 million migrants crossed the U.S. southern border in the 2022 fiscal year [that’s the year ending September 30th] a record never seen before. That’s compared to just 1.7 million migrants that crossed in 2021, according to [U.S. Border Patrol] statistics.

Those numbers are expected to increase once Title 42, a Trump-era COVID policy used to expel about 40 percent of migrants who enter the country illegally, ends Dec. 21.

[Group of over 700 migrants caught crossing US border into Texas , by MaryAnn Martinez, December 8, 2022]

Yet politicians have been telling us for years now—I think actually for decades—that the number of illegal aliens living in the U.S.A. is eleven million. Chuck Schumer used that number just last month; although to be fair to the Senate Majority Leader his actual words were: ”eleven million or however many.”

I repeat: The numbers on the Census Bureau’s Population Clock are good enough for government work, that’s all. For sure they are good enough for a government run by, and for, people who are perfectly indifferent to how many foreign scofflaws live in our country (Schumer’s ”however many”)—who, indeed, think that the bigger the number is, the better.

Tuesday this week our president went to Arizona to give a speech about the national economy. As he was leaving Washington, D.C. reporter Peter Doocy asked him if he would take the opportunity to visit the border. The Chief Executive replied, actual quote: ”There are more important things going on.” So no, he did not visit the border.

To the people who rule us, nothing is less important than the integrity of our nation’s borders.