John Derbyshire: Britain’s Latest Immigrant Invasion Is White (Bulgarian)—Perhaps That Means Something Can Be Done About It

[John Derbyshire writes: I’ll be speaking at the 2014 American Renaissance conference, which takes place April 25-27 at the lodge in Montgomery Bell State Park, near Nashville.

Full details are on the AmRen website, as is a write-up of last year’s very successful conference, at which I gave a talk.

It’s a warm, friendly gathering, with many opportunities to socialize and exchange ideas. The staff at the lodge are hospitable, and the food surprisingly good. The park itself is beautiful, with miles of hiking trails and many noble prospects.

Some antifa neckbeards may show up for light entertainment, but the park police will keep them well corralled.

Early birds get discounts, so if you can make it to Tennessee that weekend, register now!] 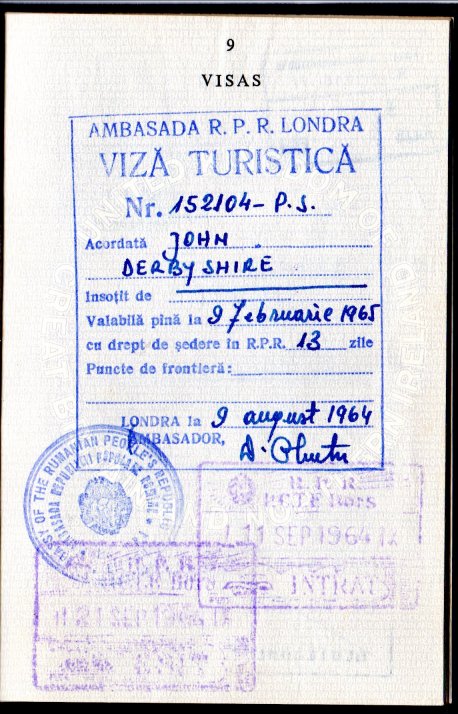 Among other, much more important anniversaries, 2014 is the semicentenary of my one and only visit to Romania. According to my passport, I entered what was then the Rumanian [sic] People’s Republic on September 11th 1964, and left ten days later. I recorded some random reminiscences here.

I have never been to Bulgaria; although once, again back in Iron Curtain days, I patronized an automobile service station in White Plains, New York, run by Bulgarians. On the office wall hung a photograph of King Simeon, then living in exile in Spain. (He is still with us—the only living person to bear the title “Tsar.”)

My base of knowledge for estimating the impact of several million Romanian and Bulgarian immigrants into Britain, following the complete opening of the borders this Wednesday, is thus regrettably narrow.

And note that word “complete.” There are already plenty of people from these two poor, corrupt Balkan nations already in Britain—around 100,000 Romanians and 50,000 Bulgarians at year’s end. They have been allowed in since joining the EU in 2007, although subject to quotas and work permits.

The Avis clerk who checked in my rental car return at Heathrow Airport last November 11th was a charming young lady from Romania, who reacted with delight when I tried out my very limited stock of remembered Romanian phrases on her.

This Wednesday the quotas and permits were dropped. There will be some easily-evaded limitations on what welfare programs the immigrants may apply for (the BBC website has a handy Q&A here), but the British border has essentially been abolished for them.

This latest opening of Britain’s borders has generated a mass of commentary. At one pole there is blithe enthusiasm:

On behalf of The Economist’s home country, we invite you to come and work here. Beginning on January 1st, you can go anywhere in the European Union. We hope lots of you choose Britain. [You’re welcome: An open letter to the citizens of Bulgaria and Romania, The Economist, December 21, 2013.]

At the other pole there are forebodings of doom:

THE day of destiny has almost arrived. Another stage is about to be reached in the destruction of national identity and our existence as an independent country. From the beginning of January, all restrictions will be lifted on immigration to Britain of people from Bulgaria and Romania. Under European Union free movement laws, the 28 million citizens of these two countries will have the legal right to settle here.  [Mass immigration is destroying our once great nation, by Leo McKinstry, Daily Express, December 30, 2013.]

The coming flood of Romanians and Bulgarians is an interesting “control” case for commentators on mass immigration in that there is not much of a race issue to it. These are mostly white Europeans.

You could argue in fact that in British resistance to the flood there is something of straining at gnats while swallowing camels.

Having admitted hundreds of thousands of blacks from Africa and the Caribbean, the Brits have given themselves a U.S.-style race problem all their very own, where they had none before.

Having further, across the same span of decades, admitted hundreds of thousands of Muslims from West Asia and Africa, the Brits added a religion problem to their race problem, with mad preachers inciting horrid crimes, and the dysgenic consequences of cousin marriage.

And now outrage is being expressed at the prospect of some similar number of white mostly-European Christians settling in Britain?

As the kids say: Hel-lo?

(Nobody knows how many Romanians and Bulgarians will settle in Britain. Estimates vary widely. The mild-mannered think tank Migration Watch estimates 50,000 a year for the next few years. One Romanian parliamentarian, however, estimates “hundreds of thousands” a year.

There are currently two million blacks in Britain and three million Muslims, with an overlap of 100 to 150 thousand, mostly Somalis. Taking five million as a rough total for blacks-plus-Muslims, it would likely take a decade or two for Romanians-plus-Bulgarians to reach that number, even on the high estimates.)

It’s a fair point, and of course the optimal time for Britons to be usefully outraged is decades in the past.

The very absence of a race factor here makes outrage easier, though. To be outraged at mass settlement by Jamaicans, Pakistanis, or Somalis would be racist. That, as everyone knows, is the worst thing in the world to be.

Thus some portion of the fuss about Romanian and Bulgarian settlement is anger at mass immigration in general, suppressed until now by fear of being thought racist.

Some other portion is dislike of Gypsies, who seem to go out of their way to make themselves collectively dislikable. As my Taki’s Magazine colleague Jim Goad has written:

Isn’t it possible, even to the most starry-eyed egalitarian dipshit, that there’s at least one ethnic group on this planet that genuinely sucks? Why can’t that group be Gypsies? [The Little Blonde Gypsy Girl, Taki’s Magazine, October 21, 2013.]

For the left side of the native-Brit bell curve, the Gypsy issue is massively confused by the modern fad of referring to them as “Roma,” which dimmer people take to by synonymous with “Romanian,” though the two words are etymologically distinct.

Romania has a lot of Gypsies—around one in thirty of the population. They live in very degraded conditions.

I recall riding in a truck along a road in the Carpathians at twilight, and suddenly seeing, in the gloomy middle distance, forty or fifty people squatting in a circle around a fire, like Neanderthals, no dwellings or vehicles anywhere in sight. “Zigeuner,” muttered my German-speaking driver with disgust, and slowed to let me look.

Some children separated from the gathering and scampered over to wonder at us. (Trans-Carpathian road traffic was very light in 1964.) Up close, they were the filthiest human beings I have ever seen, their faces caked with black dirt, their clothes filthy rags. We sped away, the driver cursing these and all other Zigeuner.

In Iron Curtain days Romanians had a name as thieves. There were many jokes on this theme. (I told one of them here.) Romanians tell you it’s only the Gypsies that are thieves, giving all other Romanians a bad name.

Although I received much kindness and generosity from Romanians, I must register some skepticism here on logical grounds. Hungary has a higher proportion of Gypsies than Romania—around one in twelve. Why aren’t Hungarians proverbially thieves? Likewise Slovakia and Bulgaria. Hmm.

Whatever the truth of the matter, Romanian Gypsies are living down to their reputation in Britain. The complacent, law-abiding Brits are easy marks for them. They beg, they rob, they colonize parks and public gardens, trashing and befouling them. Finding pick-pocketing too easy, they have graduated to stealing entire houses.

So there you have two reasons for the fuss about Romanians and Bulgarians: the absence of a race factor making dissent easier to voice, and dislike of Gypsies.

(You could argue that the latter actually is racism, as Gypsies are genetically distinct—localized inbred populations from a West Asian founder group. Gypsies are sufficiently white, though, and their sociopathy sufficiently undeniable, that nobody thinks that way.)

If the whiteness and Christianity of this new inflow really has allowed the British at large—as opposed to fringe groups easily shouted down—to voice long pent-up resentment at mass immigration, the nation might owe a debt of gratitude to Romania and Bulgaria.

It may be that what needs to be done—exit from the EU and a moratorium on all immigration—may be more easily done when the reason for doing it is free of the dread taint of racism. Britain would still be stuck with its race problem and its Muslim problem; but by recovering sovereignty over their own affairs and control over their borders, the British might then be emboldened to tackle these other follies, perhaps by bribed repatriation.

Or possibly things have gone too far. Surveying the history of mass immigration into Britain, it’s remarkable how inattentive the citizenry has been. A historian famously remarked that Britain acquired her empire “in a fit of absence of mind.” Much the same could be said of the mentality that gave up entire cities to unassimilable peoples, and law-making powers to alien bureaucrats.

Many people will tell you—the proprietor of this website is one of them—that things have gotten as bad as they are because no-one of political standing had the courage to stand up to the cheap-labor and Cultural Marxist lobbies.

I don’t buy that. In a consensual society, when enough people want some political outcome badly enough, they can organize and get it. Courageous people will step forward to give a lead. Think of Prohibition.

The sad truth is that in all those decades of mass immigration into Britain, while there was always dissent and resistance, it was never the case that enough people wanted badly enough to stop the folly.

Wisdom doesn’t come easily, to nations any more than to individuals. In a great wave of affluence such as Britain enjoyed after WW2, with so many pleasures to distract the mind, and so much guilt about having plenty while others had little, it was especially easy to be unwise.

I have elsewhere brought up Shakespeare’s Timon of Athens as a parallel. A wealthy man who was carelessly generous with his wealth, Timon is bankrupted at last. He laments: “Unwisely, not ignobly, have I given.”

The Brits have been giving away their patrimony for decades: not ignobly, but unwisely. With the enstupidating race factor out of the way (or at least not obviously in the way), perhaps this coming wave of mass settlement will concentrate their minds towards wisdom.

We shall find out when the European parliamentary elections take place in May.