England Is Now the Most Densely Populated European Nation, with Romagarians Yet to Come! 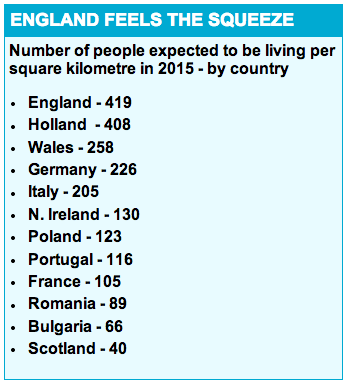 What happens to a nation when the liberal political party uses its time in power to import millions of immigrants who support big government in order to pump up its voter numbers?

You get today’s overcrowded England, which is the result of Tony Blair and his Labour Party’s treasonous finagling.

(Any perceived similarity to today’s Obama amnesty is completely on target.)

Labour had the gall last March to suggest a decrease in immigration, after it had betrayed the values of the nation, not to mention undermining the traditional people and inflicting chaos on society by importing a historic enemy, hostile Muslims.

To be clear, the Labour government actually recruited foreigners to immigrate and thereby alter the political consensus to favor the left, while purposely harming the British people in numerous ways, from job loss to importing terrorism.

Now all of Britain faces the January opening of its national doors to Romanians and Bulgarians due to the commandment of the European Union that open borders must prevail. The newbies will all be poor and headed for the welfare offices to take advantage of the UK’s generous benefits. The Roma tribe is so backward that even Muslims think they need socialization training.

Together, Bulgaria and Romania number around 29 million inhabitants, and there is a lot of poverty and not much reason to stay. One headline: ‘In January, the only thing left will be the goat’: Romanian father-of-seven’s boast as mayor says half the population of his villages are on their way to Britain for the higher salaries and generous benefits (Daily Mail, 11/10/13).

Below, a Roma family prepares to leave Bulgaria for Britain in January 2014 (Roma countdown for a mass exodus to UK, Daily Express, 12/21/13) 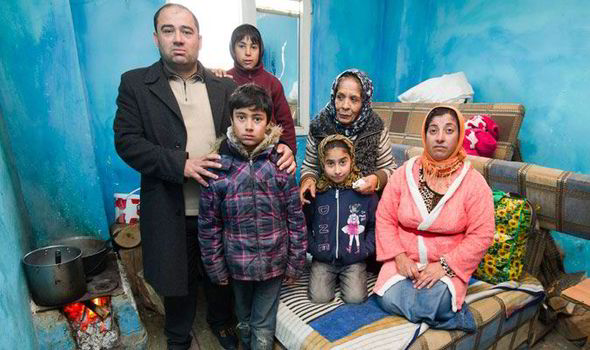 When Poland entered the EU in 2004 the diversocrats predicted only a few thousand Poles would immigrate to the UK, but the number grew to a million, so current reassurances from experts are not convincing.

In addition, Roma kiddies are being more fully trained in pickpocket techniques in anticipation of easy-to-pinch British wallets. One Roma man said, “Pickpocketing is just part of our heritage.”

Ah, diversity! England is facing even worse overpopulation, and the new residents will be jihadists, professional thieves or welfare moochers. Such is the cultural enrichment of diverse immigration, particularly when transnational organizations (i.e. the EU) order it against the wishes of local people.

Of course, diversity is a project of the elites and the foreign tribes that benefit; the people don’t want it, as shown by an October poll in which two-thirds wanted “drastic action” to reduce immigration. The former Home Secretary David Blunkett warned of rioting to follow mass immigration from eastern Europe, which might be the only way for the people to illustrate their anger to the clueless powerful.

How many will come? Britain will be lucky if only half a million Romagarians show up at the door.

England has become the most overcrowded major country in Europe.

Population growth is so rapid that four times as many people will soon be crammed in as France and twice as many as Germany.

England has overtaken the Netherlands to become second only to tiny Malta as the most densely populated nation in the EU.

Over the next 30 years the gap will widen because Germany, France and Holland will either decline or grow only slowly.

The House of Commons figures – based on data from the UK and EU statistical agencies – show the huge impact of Labour’s open-door immigration policy.

By 2046, an estimated 494 people will be squeezed into every square kilometre of England compared with 411 now and only 374 when Tony Blair took power in 1997.

The revelations will fuel the debate over immigration, especially with the UK opening its borders to Romanian and Bulgarian workers on New Year’s Day.

‘For reasons which have never been properly explained, Labour instigated a policy of massive expansion of immigration.

The fear must be a future Labour government would do the same’. Sir Andrew Green, chairman of the Migrationwatch think-tank, said 90 per cent of immigrants to the UK headed to England.

‘The rapidly growing population density is an inevitable consequence of Labour’s mass immigration of nearly four million in 13 years,’ he added.

‘We will need to build 200 houses a day for the next 20 years or so simply for new immigrants and their families.’

By 2046, an astonishing 494 people will be living in each square kilometre.

The equivalent figure for France will be just 115, for Germany 204 and the Netherlands 421.

By 2015, England will also be more than three times more packed than Poland – where an estimated one million of the arrivals under Labour originated from.

The research raises concerns about how the UK’s infrastructure can cope with the increased pressure on schools, hospitals and roads.

The large numbers packed into the country will also affect water and power supplies, and will increase pressure to build over green spaces.

David Cameron, under pressure to confront the electoral threat posed by UKIP, has changed the law to prevent EU migrants claiming any benefits in the first three months following arrival.

Officials say they want to reduce the ‘pull factor’ to the UK.

The Office for National Statistics has already warned that Britain must make room for almost 10million more people over the next 25 years – the equivalent of building a city even larger than London.

The increase, mainly a result of immigration and high migrant birthrates, will push numbers to 73.3million by 2037.

A Home Office spokesman said: ‘Immigration has brought benefits to the UK and we welcome people who want to come here to contribute to our economy and society.

‘However, it is important to control immigration because of its effect on social cohesion, our public services, and on jobs and wages.’