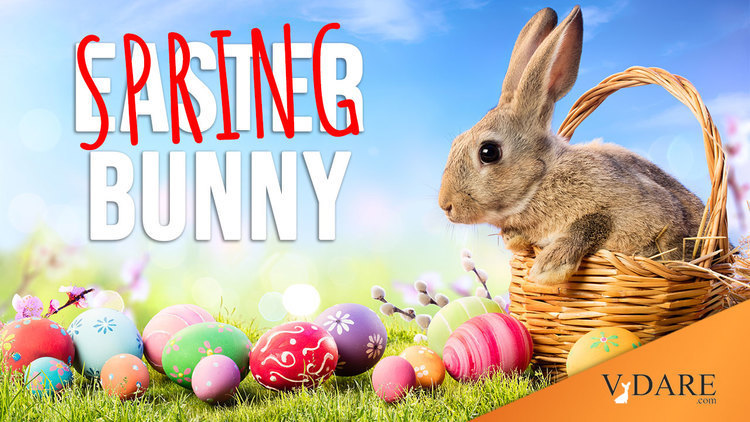 As Peter Brimelow mentioned last year, and I noticed again recently, the same people who make war against Christmas are coming for the Easter Bunny.

In Milford, CT, the Easter Egg Hunt is being renamed the "Spring Egg Hunt." As a local Selectman put it, "One person said we'd offend someone if we call it an Easter egg hunt, that's all it took."

Over the years we haven't written nearly as much about Easter, as we have about Christmas, but here are few samples:

[Steve Sailer's kids got a rabbit for Easter. What they didn't get was an illegal alien to do the vacuuming. Read about why this was unnecessary.]

2003: What Would Enoch Say? By Peter Brimelow

"By a happy coincidence, Easter Sunday falls this year on the thirty-fifth anniversary of Enoch Powell's great speech on immigration – given in Birmingham on April 20, 1968. This neatly intertwines the themes of spiritual and national death and resurrection in a way that might have pleased Powell, who had been a fierce atheist as a young man and whose equally fierce if unorthodox Anglicanism in later life was explicitly related to his appreciation of the English Church as an expression of the English nation."

Two years ago at Easter Time a movie about Christ's Passion was released by Mel Gibson. It was roughly handled by the critics, and caused a huge controversy. See Tom Piatak in Chronicles and these two VDARE.COM articles:

Finally, and our most serious piece on Easter is this one:

2002: Easter and the Resurrection of the West by Chilton Williamson

"Yet people can change, including societies and—even—the politicians who beset them. Hope is a virtue.

"Expect therefore a miracle—in particular on this feast of the greatest and longest-lasting of all miracles, the Resurrection of Our Lord Jesus Christ from the dead.

"To that end, the editors of VDARE.COM direct their Easter prayers—and on behalf of their readers, too!"