There’s a lot to like about Conor Lamb, on paper anyway. The Democratic challenger in Pennsylvania’s special election presents as a rare breed; a white male former Marine gang prosecuting attorney from Pittsburgh, Lamb is all but a specter of what once was in a no longer populist, working man’s Democratic Party that now caters to Wall Street, childless purple-haired freaks, angry People of Color, and dregs from the Third World—the so-called Coalition of the Ascendant.

Lamb is an uncommon candidate in an even more uncommon district. 96% white and 84% urban, Pennsylvania’s 18th congressional district encompasses much of the southern suburbs of Pittsburgh, as well as the urban centers of Monroeville and Greensburg. PA-18 also cuts across largely rural Westmoreland and Washington counties, both of which are considered to be moderately populated Republican strongholds. Registered Democrats outweigh registered Republicans in PA-18 by roughly 70,000, however the district has been trending strongly Republican for the past few decades. 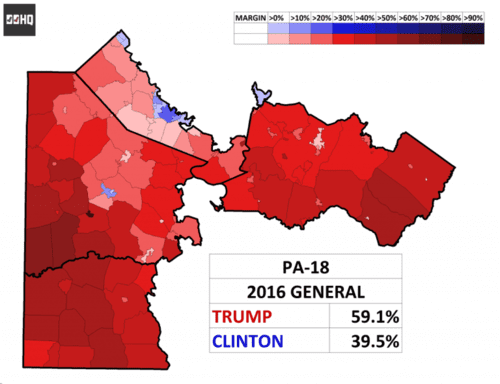 For these reasons, Conor Lamb is the quintessential anachronistic Democratic candidate. Among his chief issues are the opioid crisis, infrastructure, working class jobs, reforming student loans, and affordable healthcare. Lamb is vocally anti-Pelosi and barely mentions President Trump by name. This is a noticeable departure from the single-threaded just-attack-Trump electoral strategy of the national party and a feat made even more impressive by the fact that special elections tend to be a referendum on the sitting president.

By contrast, his Republican opponent is an aging boomer social conservative and former interrogation consultant at Abu Ghraib  [Saccone proud of role in Iraq,  by Joanna Blair, Pittsburgh Tribune, December 22, 2005]who doesn’t even mention the opioid crisis anywhere on his campaign website.

A constituent, the mother of an addict, recently asked Saccone what he would do to help her son. His tone-deaf reply was to ask her what other government programs she would cut to fund a drug addiction program. How conservative. Strong on all the issues of yesteryear’s GOP that nobody cares about and weak or simply MIA on the issues people do, Rick Saccone is just the sort of underwhelming candidate the Very Official and Super Serious GOP Candidate Recruitment Taskforce should be sprinting away from at 100 mph.

The utterly ridiculous juxtaposition of these two candidates—on one hand a white Democrat who embodies many of the central tenets of Trump’s decidedly populist working class agenda that propelled him to victory in Pennsylvania in 2016, and on the other, an unremarkable milquetoast Republican whose neoconservative bona fides are second only to that of Bill Kristol or Erick Erickson—explains both the close polling and disparity in dollars in a soon-to-be-decided contest on March 13th.

In an R+11 district that Trump, Romney, and McCain all won by ~20 points, the latest polling shows the race within single digits, with Saccone only slightly ahead. In terms of dollars, Saccone’s campaign has been out-raised by Lamb 4:1 (and by 20:1 in terms of small dollar donors), while 3rd party groups for Saccone have outspent similar groups for

“We can get him,” Lamb says confidently a few minutes later as we walk toward a Marines-themed display case full of combat knives. If he can meet voters, and talk to them—really talk to them honestly and rationally, and not get bogged down by partisan labels and national politics—Lamb’s sure he can win this thing.

Take, for example, immigration. In a district dotted with shuttered steel mills, Lamb believes voters will come around to his position if he can hold an honest, earnest discussion. “I think too often the whole issue gets talked about as if we were writing from a blank slate, or we can pick whatever we want, or the government is all powerful,” Lamb says. “None of which is true.”

There are only four real options on immigration, Lamb explains. One, try to kick every undocumented immigrant out. Two, legalize the Dreamers—undocumented immigrants brought here as children—but try to kick out all the other migrants here illegally. Three, “the Dreamers obviously should stay,” and “the other 11½ million people, who knows how they got here, but they’re here, they’re in the shadows, that’s not really helping anybody, [so] let’s find a way to pull them out [of the shadows.]” And then there’s four: no change, continue the current policies.

“I really believe that if you present those four options to people, 90 percent choose option three,” he says, adding that he also supports increased border security, but at ports of entry, not a wall.

Is Conor Lamb the Next Big Democratic Upset?

This 33-year-old Marine has a chance at winning one of the GOP’s most reliable districts.

Lamb’s “Option Three” is just a high verbal IQ way of saying AllElevenMillion, a false choice in which he believes 90% of Americans are in agreement. Of course we know this is patently absurd—and Conor does too—which is why he never mentions immigration in any of his stump speeches. It’s not even on his website. There’s no way Lamb would ever buck the party on this issue, but if he did, he’d probably win by 20 points.

Ironically, so could Saccone. Frustratingly, not talking about immigration seems to be the play being made by him as well. For a man who refers to himself as “Trump before Trump was Trump”, immigration talk has been noticeably absent from his rhetoric on the trail. Quite the canary in the coal mine. Unlike his opponent, Saccone does list immigration reform as one of his issues, however in the most feeble-minded and vapid way humanly possible:

Intense. In a race that’s running 15 points in the wrong direction, it’s all going to come down to voter sentiment and turnout. A win for the GOP will be significant only in that it will deny the left a much-needed propaganda victory. Neither Lamb nor Saccone will be around long, as PA-18 is going up in smoke as a result of the PA Supreme Court’s newly redrawn district map that will take effect after this election.

For a Republican Party that demands it must “run candidates who can win” in the face of rising nationalism, they are doing anything but. Also by design. A GOP loss in Pennsylvania would be nothing new for a party that, when left to its own devices, has a strong penchant for losing. The winning playbook has already been written: voters, especially in the Rust Belt, want fewer immigrants (illegal and legal), less foreign intervention, less “free trade”, more middle class jobs, and drug and crime free neighborhoods and schools. Saccone hardly touches on any of those things. Lamb makes inroads with some of them, albeit only superficially. Voters deserve more than just a false dichotomy erected by the establishment. Or do we? If these things are desired, then they must be demanded, and we must play an active role in making those demands. We’re simply running out of time.