"Hands Up, Don’t Think!" We Will Never Be Free Of Ferguson

Well, back to Ferguson. Reports have just surfaced that one of the grand jury witnesses, Sandra McElroy, may be a “racist.” [‘Witness 40’ for Ferguson grand jury stands by account: ‘Am I part of the KKK? No’ by Sasha Goldstein, Daily News, December 18, 2014] Naturally, this is being used in an attempt to exonerate Michael Brown and charge Officer Darren Wilson, although Wilson was cleared on the testimony of black witnesses and the strength of DNA evidence and McElroy seems to be have been ripped apart by the prosecutors.[Witness 40 in Michael Brown case raises questions about grand jury proceedings, by Stephen Deere, St. Louis Post Dispatch, December 18, 2014]

But what does it matter? Like the mythical exoneration of the Central Park Five, the increasingly hysterical movement against white police officers has nothing to do with facts.

By now, most literate people know that Michael Brown did not have his hands up when he was shot by Officer Wilson. That unraveled months ago when the St. Louis-Post Dispatch reported on the findings of the official autopsy. [Official Autopsy shows Michael Brown had Close-range Wound to his Hand, Marijuana in System, by Christine Byers, Oct. 22, 2014]. The Post-Dispatch’s Byers quoted San Francisco forensic pathologist Dr. Judy Melinek:

“Brown’s palms could not have been facing Wilson, as some witnesses have said… That trajectory shows Brown probably was not taking a standard surrender position with arms above the shoulders and palms out when he was hit…”

The “Hands up, don’t shoot” narrative was further undermined when the Washington Post reported that “[s]even or eight African American eyewitnesses have provided testimony consistent with Wilson’s account, but none have spoken publicly out of fear for their safety.” [Evidence Supports Officer’s Account of Shooting in Ferguson, by Kimberly Kindy and Sari Horwitz, Oct. 23, 2014]

Most importantly, the injuries inflicted on Darren Wilson and the DNA evidence—including blood in the car and on Darren Wilson’s gun—show that the Narrative about a black man with hands up being executed in the street could not have happened. And any so-called moral authority in the Ferguson “community” was destroyed by the pointless and destructive riots that followed the failure to bring charges against Officer Darren Wilson. Indeed, it seems a thuggish and almost nihilistic ethos prevails in America’s most famous culturally enriched “community.”

Some protesters have actually admitted they’d repeat the “Hands up” mantra even if the underlying factual allegation were proven wrong. “Even if you don't find that it's true, it's a valid rallying cry,” protester Taylor Gruenloh told the Associated Press. “It's just a metaphor.” [For Some, Location of Brown’s Hands Irrelevant, by David A. Lieb and Holbrook Mohr, Dec. 2, 2014]

Thus just a week ago, more than one hundred black politicians and congressional staffers gathered outside the House of Representatives and in moronic unison made the discredited “Hands up, don't shoot” gesture. [Black Congressional Staffers Stage Powerful ‘Hands Up, Don’t Shoot’ Protest, by Jessica Roy, New York Magazine, Dec. 11, 2014] 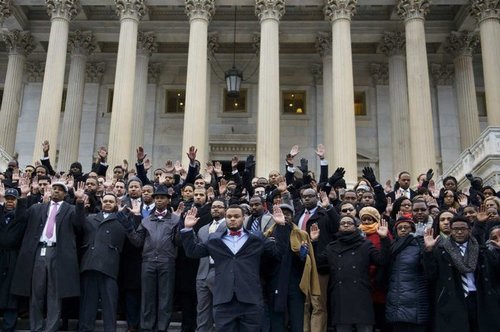 These aren’t street people. We are talking about Washington, DC, and we are talking about African-American Congressional staff. They might have degrees from Princeton and Harvard Law, like Michelle Obama. But evidence doesn’t matter to them either.

The group photo outside of the House follows an earlier ludicrous moment where several black Congressmen stood on the House floor and made their silly gesture: 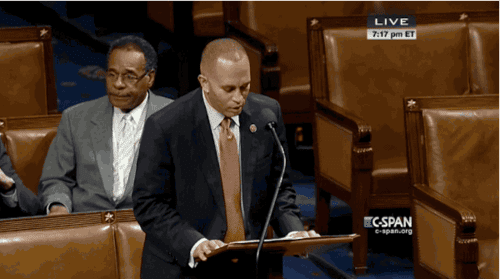 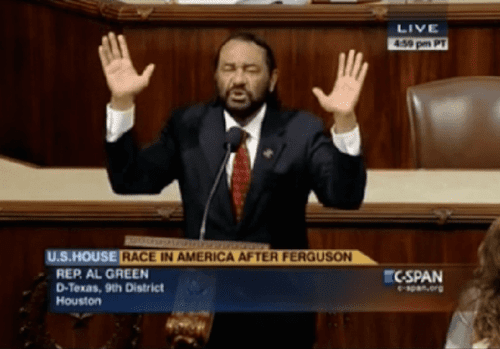 These Congressmen are the John Boehners of the black race: entitled shysters who enable leeches. Boehner’s dark skin reflects his pampered lifestyle, just as the light skin of many of those protesting Congressional staffers suggests their relative privilege. After all, according to current campus orthodoxy, “[L]ighter-skinned people of color enjoy substantial privileges that are still unattainable to their darker-skinned brothers and sisters.” [(pdf) The Persistent Problem of Colorism: Skin Tone, Status, and Inequality, by Margaret Hunter, Sociology Compass, 2007.]

The discredited "Hands up, don't shoot" pose is today's greatest single racial hoax—but not the worst racial outrage. That would have to be the deadly and racist “knockout game”, which has resulted in at least six deaths so far. [Deadly Truth Behind Knockout Game, WND, December 15, 2014]

NPR shared a valuable insight into the wider racial tribalism at the heart of gestures like the one outside the House.

[Staffers Walk Out Of Congress In Protest Over Brown And Garner Cases, by Bill Chappell, National Public Radio, Dec. 11, 2014]

That raises an important point: To a significant extent, the Brown fiasco has transcended the black-white divide by bringing in other colors of the rainbow. And now the fiasco over “Witness 40” will give this farce new life, even though it does nothing to change the evidence in the case.

Behold the wonders of diversity—a racially diverse rainbow coalition of public whose only commonality is anti-white bigotry and an indifference to facts.

And if we can listen closely, we can hear their battle cry—"Hands up, don’t think!"